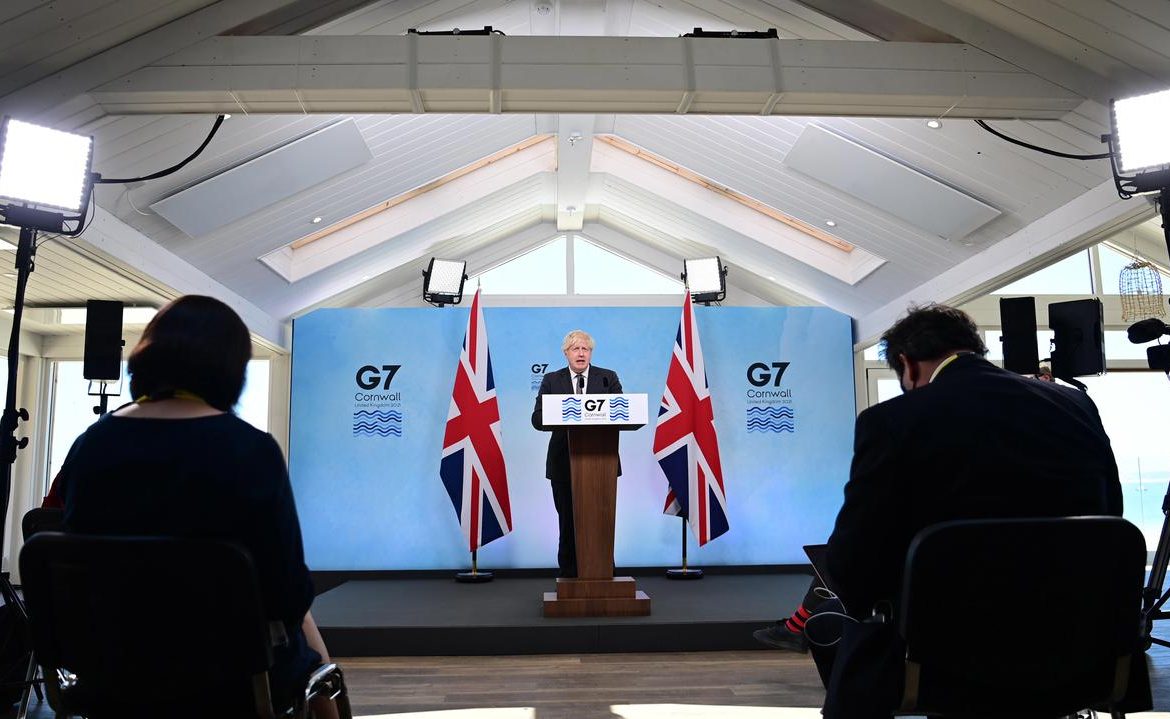 The G7 countries pledged to provide one billion vaccines against the Covid-19 virus to poor countries to help them fight the epidemic. This is one of the findings of the meeting of leaders of the world’s largest economic powers, announced on Sunday by British Prime Minister Boris Johnson, the host of the talks. Other provisions were included in the published statement.

Following the G7 summit since Friday, the leaders of the United States, France, Japan, Germany, Great Britain, Italy and Canada issued a joint statement. The document lists six main areas of action. The leaders committed to strengthening efforts to end the current pandemic and prevent future outbreaks, continue to help economies recover from the crisis, and support freer and fairer trade with a fairer tax system, to prevent climate change, including achieving net zero emissions by 2050. , to help invest in infrastructure in developing countries and promote shared values ​​such as democracy, equality and human rights around the world.

G7 Final Communiqué after the Summit (document in English)

The main provisions of the G7 summit:
– Pledge to provide poor countries with one billion vaccines against the Covid-19 virus; Continuation of economic support programs “as long as necessary”; A commitment to spend $100 billion annually to help poor countries reduce carbon emissions and deal with global warming; Supporting the holding of the Tokyo Olympic and Paralympic Games in 2021; – demand that Russia take action against the perpetrators of cyber attacks; – call on Russia to “stop destabilizing behavior and malign activities” and investigate the use of chemical weapons on Russian soil; – Demanding China to fully and thoroughly investigate the origin of the coronavirus that has spread from that country to the whole world; Urge China to maintain a high degree of autonomy in Hong Kong and highlight human rights violations in Xinjiang; Calling for an immediate cessation of hostilities in the Ethiopian Tigray region.

Johnson on vaccines for poor countries. “I am happy to announce this.”

“A week ago I asked my fellow leaders to help prepare and deliver the doses we need to vaccinate the world by the end of 2022,” Boris Johnson told reporters at the closing conference of the Group of Seven summit in his country. “I am pleased to announce that leaders have pledged to provide more than 1 billion doses this weekend, either directly or through the COVAX programme,” he added.

A statement issued after the summit said the leaders of the Group of Seven industrialized nations committed to continuing their economic support programs “as long as necessary” and avoiding past mistakes when they were dispensed with too soon.

These plans will include job creation, infrastructure investment, and the promotion of innovation and people. “This has not been the case in previous global crises and we are determined this time it will be different,” the press release said.

G7 to host the Tokyo Games

The Group of Seven also voted to hold the Olympic Games in Tokyo this year. “We reaffirm our support for the safe and secure holding of the Tokyo 2020 Olympic and Paralympic Games as a symbol of global unity in overcoming COVID-19,” the statement read.

From Russia, the G7 countries have demanded action against those carrying out cyber attacks and using ransomware from their borders. The press release also called on Moscow to “stop destabilizing behavior and malign activities” and investigate the use of chemical weapons on Russian soil.

Concern about the conflict in Tigray

The Group of Seven called for an immediate end to hostilities in Ethiopia’s Tigray region.

“We are deeply concerned about the ongoing conflict in the Ethiopian region of Tigray and reports of a major humanitarian tragedy developing,” the statement said. “We call for an immediate cessation of hostilities, unhindered humanitarian access to all areas, and an immediate withdrawal of Eritrean forces,” he added.

Thousands were killed and hundreds of thousands were forced to leave their homes in the fighting between the Tigra People’s Liberation Front ruling in the region since last November and the Ethiopian government.

The main topics of discussions at the G7 summit in Cornwall since Friday have been recovering from the COVID-19 pandemic, helping poor countries get vaccinated against the coronavirus, supporting free trade, preventing protectionism and preventing harmful climate change.

On Saturday, thousands of people in Falmouth, UK, called for decisive action on climate change in front of the media center serving the Group of Seven summit in nearby Carbis Bay. “G7 is one eco,” he chanted, “we’re drowning in promises.”

Don't Miss it Eurovision 2021 at The Crooked Mirror. Netizens were not disappointed [MEMY]
Up Next Putin: We will hand the Americans over to hackers if the United States does the same