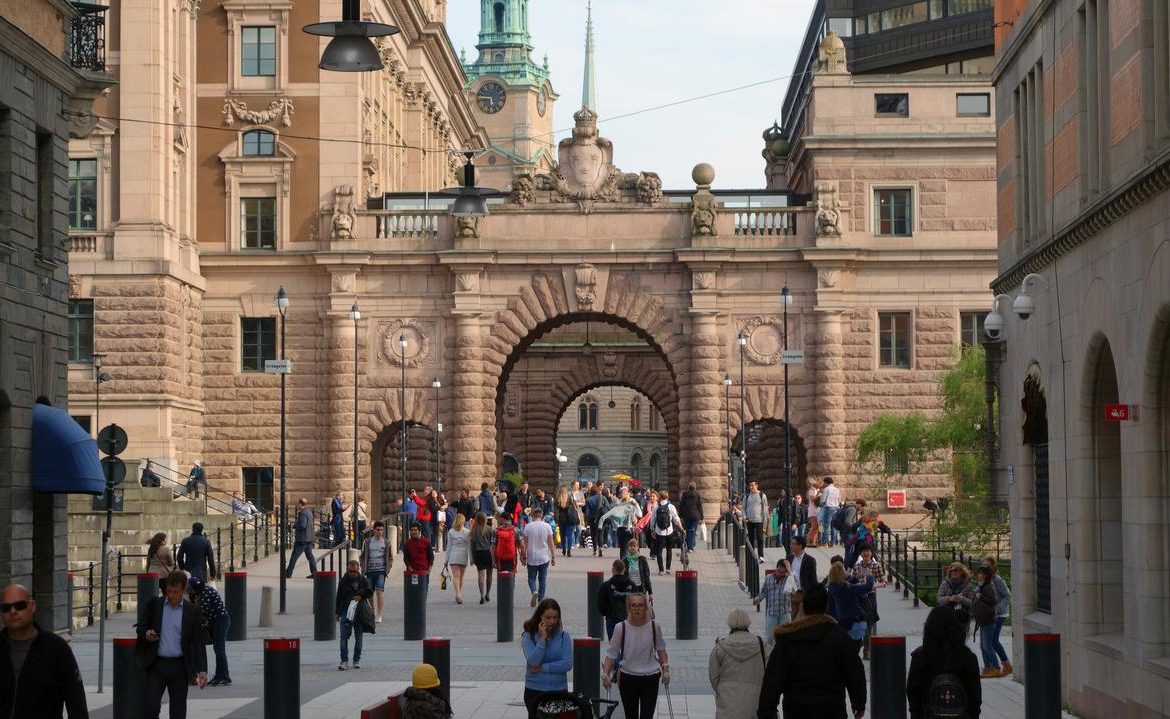 Helga Kagda, a 33-year-old Ukrainian woman living in Sweden, saw a woman walking the Ukrainian flag on her way to work. She caught her eye, and in response she was called in Russian. The Ukrainian woman who was attacked recorded the entire incident and posted the film online. The Embassy of Ukraine in Sweden noted the matter. Ukrainian diplomat Andrey Pachutniuk asserts that “this person must bear the responsibility provided for by law.”

It was held in Stockholm, near the Embassy of the Russian Federation. Helga Kajda described the event on Monday on her personal Facebook page. In the post you can read that the woman – as it turned out, a Russian woman – threw the Ukrainian flag and blue and yellow ribbons on the ground and trampled on it. Kajda, who was passing by, took pictures of her. The woman approached her and launched a verbal attack, threatening to use force.

“Vladimir your baptism, Vladimir will bury you”

A young Ukrainian girl began to record it and upload the film to the network. Before the phone battery ran out, it was possible to record about four minutes perora, in which the Russian woman says, among other things: “These are fascist symbols” (about the flag and ribbons of Ukraine); “You can’t imagine what I can do to you. You will rot”; “Do you live here on unemployment benefits or are you a whore? Ukrainian women are either prostitutes or janitors. They can clean the floor in my summer residence”; “You don’t know your story. Vladimir baptized you, Vladimir will bury you”; “Which village are you from? You have a bad accent. Learn to speak Russian”; “I hope you are as beautiful as me, but you look like a monkey. My eyes hurt from looking at you”; “Why do you sign me? I like you? (…) Record and record. Then give your ugly face next to me for comparison.”

See also  Horrific scenes in the American Church! The man was shot in front of his mother. There is a police chase for the perpetrator

The woman, who is older than Kagda, also made fun of her clothes (she bragged about herself with a coat for 25,000 SEK) and her height (“Your parents are dwarves too?”).

The Russian woman was fired from her job

While publishing the video, the Ukrainian woman wanted to draw attention to the fact that people with such attitudes live in democratic societies and anyone can fall victim to them. Along with the film, she posted on Facebook a request for a Swedish translation of it. “She started speaking Russian and was so nervous that I forgot I had to answer in Swedish,” she explained in the post. In the end, the subtitles were in English, and the entire recording can be viewed on YouTube.

Internet users also helped identify the woman. It is proved what her name is and that she is a Russian teacher by profession. After the Swedish media reported the case, the woman was fired from work in a recruitment and training company.

Kagda reported the incident to the police. Also, the Embassy of Ukraine in Sweden “has already requested Swedish law enforcement agencies to provide a legal assessment of the incident and take appropriate action,” as we read in the Facebook post. “Such behavior should not be ignored,” Ukrainian diplomat Andrei Pachutniuk wrote. “This person must bear the responsibility provided for by law.”

As a grandmother herself, she is glad that people took this incident seriously. In subsequent interventions, she expressed her hope that “this will help everyone understand that aggression against people of other nationalities and hate speech is unacceptable.” She also mentioned that this is a very difficult time for Ukraine and the Ukrainians, and she asked: “Help them however you can.”