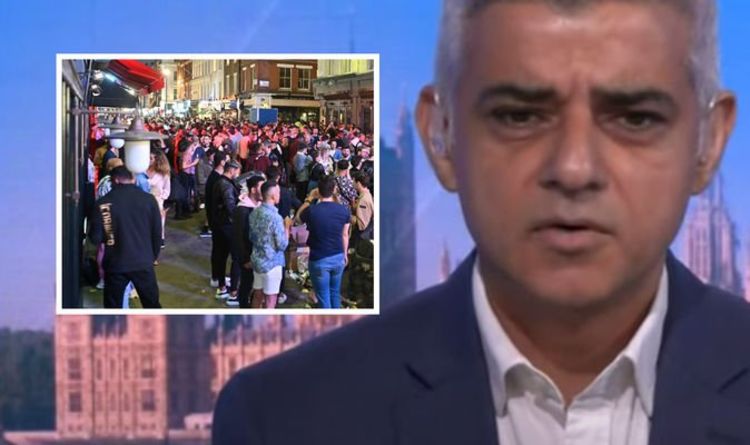 Londoners may be banned from household mixing to prevent the spread of the Coronavirus if the capital moves from Level 1 to Level 2, according to Sadiq Khan. The largest study of the spread of the Corona virus among the population said on Friday that there are up to 45,000 new cases of the new Corona virus in England every day, adding that it could re-emerge in the north of the country in other places within weeks. But cases are doubling twice as fast in the Northwest, Yorkshire and the West Midlands compared to the whole of England, according to the largest COVID-19 study of its kind.

Speaking to LBC, Khan said: “I am increasingly concerned about the spread of the Coronavirus in our city, and I am warning my colleagues in London that further restrictions may be imposed.

“We are at a very dangerous turning point. The virus is accelerating in every part of London.

“My expectation is that there will be more restrictions that will be imposed because we do not want to see in October and November what we saw in March and April.

“The spread of the virus is accelerating in every part of London and what I don’t want is that people who live in one area feel fine … if it is not so prevalent in their area.”

He added that further restrictions would not be based on neighborhoods and would be across London.

Read more: Closing Announcement: How to prepare financially for a “second wave”

Mr Khan said he was working with Health Minister Matt Hancock on measures to implement in London.

“What is clear to me is that additional restrictions are inevitable in London.

It also found an eight-fold increase in infections among people over the age of 65, compared to a previous report covering the period from August 20 to September 8.

“Our robust results paint a disturbing picture of the growing epidemic across England,” said Paul Elliott, of the Imperial College of Public Health.

“While some areas are affected worse, if left unabated, infection trends will follow nationwide and could lead to high levels of unnecessary mortality and morbidity from disease.”

Imperial is the nation’s largest population study of COVID-19 infection rates, with 175,000 volunteers tested. Earlier on Friday, the Office for National Statistics found that daily cases had doubled within a week.