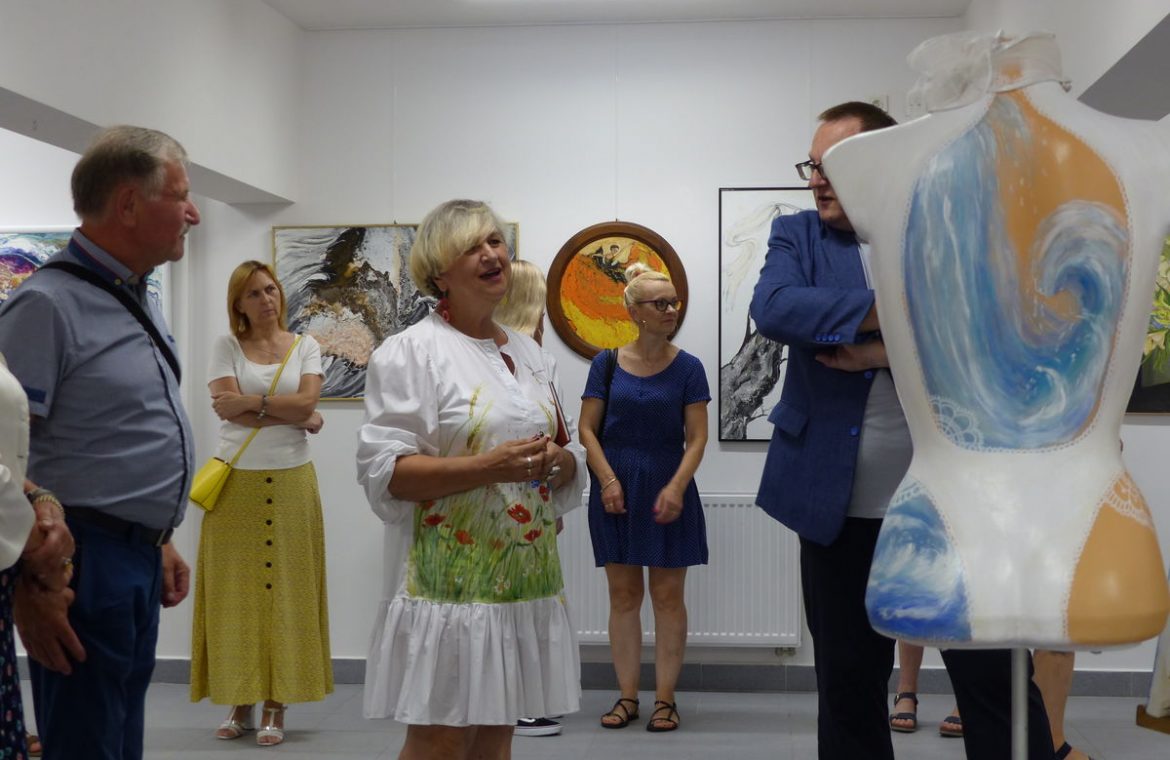 For as long as she has been drawing, she could not imagine a different life. Barbara Zubkiewicz was an accomplished artist, with the same sparkle in her eyes and love of the brush for 40 years.

A versatile New Town artist working in painting, graphics and sculpture. He loves to write poems and draws inspiration from nature. On Friday, July 16, at the Przestrzeń Gruzownia Gallery in the Municipal Cultural Center, the Parade of Barbara Ząbkiewicz was held, inaugurating her exhibition on the occasion of the jubilee of 40 years of her work. The artist, dressed in a white dress, on which she herself painted cornflowers, poppies and ears of corn, invited people to visit her world that will undoubtedly remain in the memory for a long time.

Barbara Zubkevich paints “Since Then”. She did not attend her dream school of art, instead graduating from a wicker art school. Mrs. Barbara, despite everything, appreciates this time and assures that she has learned a lot.
– When I was 15 years old, I wrote a poem about my dream of becoming an artist – said Mrs. Barbara – that this dream would never leave me, that it would remain with me and come true. I painted as often as I could, until something happened that drove me further into my dreams.

On this occasion, a poem was also written that the artist read during her journey, part of which best summed up her journey in life with an extraordinary friend by her side.

“Fina in flowery dress, appeared like a princess on a ball, and her airy tulle floated a little. It tickled my soul, and let my imagination fly away on the wings of ecstasy. Be inspired, excited and consoling. Now paint with me, frame my imagination. We became friends, me and my race.” .

– How to be a friend, and how not to paint here? – asked the smiling artist.

Works on display at the Przestrzeń Gruzownia Gallery can be viewed until July 28. These are idyllic meadows, fields, villages, landscapes, more or less known places and landmarks. Ballerinas, portraits, abstractions, and completely unusual interpretations of what we see every day.

The artist sees the world differently. I know that in an ordinary picture I will find an unusual shade that I would like to paint – said Mrs. Barbara. When asked how long it took to create one painting, she emphatically stated that she never knew how much time she spent.

Barbara Zubkiewicz has been a member of the Iawa Artistic and Cultural Society SART for 20 years. Participates in many group and solo exhibitions. Her first solo exhibition was held in 1996 at the New Culture House. The artist has also exhibited her work in Iawa and its vicinity, in Elbląg, Morąg, Olsztyn and abroad.
The artist has received many awards and honors, and her work can be found in many homes in Poland and abroad.

It is worth coming to the exhibition at the Przestrzeń Gruzowania Gallery. The exhibited works are only a part, and the following works will certainly be presented in the next planned exhibition. There will be a chance to speak to Barbara Ząbkiewicz, who beautifies the new town’s cultural life and is an unusual view of the town on the Drwęca River with a brush in her hand.

See also  Venus and Jupiter conjunction in the weekend sky. How will it be visible in Poland

Don't Miss it England – Scotland Euro 2020 match result (2021). Draw in the UK derby Britain
Up Next Meet the Performers at Up To Date Festival