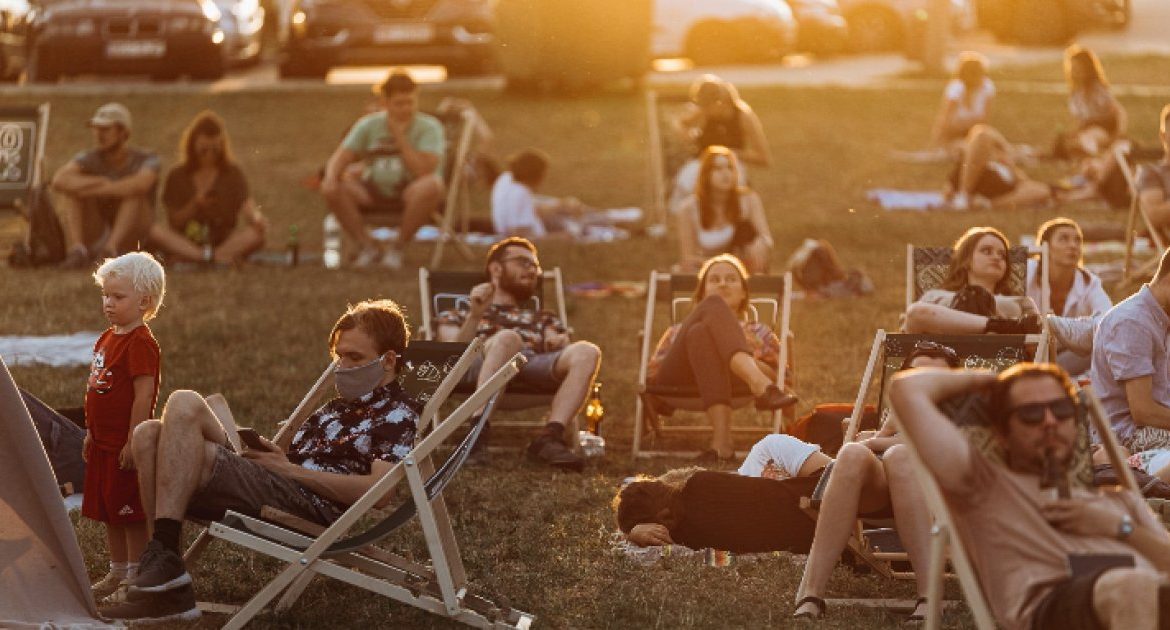 Every year, for more than a decade, the Up To Date Festival has been visited by over 10,000 people. Guests, festival events are held in venues as diverse as the Municipal Stadium in Białystok, the Podlasie Opera, the Philharmonic Orchestra or the Branicki Palace. Up To Date Festival’s mission is to present various genres of electronic and bass music, from aspirational rap, through techno and electro music, to ambient and contemporary classics.

Most of the festival’s activities take place around three stages: Pozdro Techno, Centralny Salon Ambientu and Beats. Behind each is an original idea and philosophy, which can be read not only from the characteristic landscape or arrangement of the space, but above all from the group of artists and performers who perform them.

Among the artists announced on Thursday:

DJ Python AKA Brian Pineyro has been constantly conquering the scenes in New York since 2016. Best known for his productions as DJ Python and DJ Wey, Pineyro has proven to be a professional and versatile producer. Whether it’s a misty house, an art house, techno or a choppy atmosphere, everything has been absolute gold so far, and thanks to performances at the most prestigious clubs and festivals around the world, New York’s future looks bright.

Belmondo, Belmondawg, Young G from Gdynia, Belmondziarz, Boycott, Young G, Young Sarmatian – regardless of the title, he is one of the most colorful characters in the Polish rap scene. Creator of funny and surprising lines, many of which have found their way into the slang. June 25 this year. His latest album or indeed his first solo album is entitled Hustle as usual. With this material, you will hear it on UTDF in September.

Beniovska – DJ, sound engineer and sound artist from Tri-City, currently living in Warsaw. She is known for her club and breakout groups as well as experimental literature. She has presented her work among others at the Unsound Festival in Krakow, the 17th Survival Art Review in Wrocław and the Collective TV Boiler Room. He performs regularly as part of Canti Spazializzati – a series of workshops and concerts dedicated to the theory and practice of experimental music.

The Dublin-born British producer, Cignol, refers in its productions to Electro, Techno, acid and IDM from the 80s and 90s, but with an added, specific flavour. His latest killer releases on Unknow To The Unknown, Orson, 2020 Vision, Lunar Disko, Exalt Records and Distant Worlds have established him as one of the world’s leading electro musicians.

DeFekt Live (aka Matthew Flanagan) is a tireless champion of “real” electrical and tech devices, constantly polishing their voices based on analog instruments. Visibly fascinated by the equipment and live performances, he will certainly remain in the memory of the Bialystok audience for a long time.

Djrum is a well-known underground artist with an amazing ability to skillfully combine different genres, from jazz, hip-hop and dubstep to ocean and techno. Fluidity can be felt in navigating the musical genres in Djrum’s music, and the list of genres he touches in is extensive: techno, ambient, neoclassical, jazz, electronica, broken percussion, samba, dubstep, jungle, footwork, danb, tribop, gabber and electro.

OM Unit, also known as Jim Coles, has been a prominent and leading figure in electronic music circles in the past decade. After a decade of creative experiments with sound, Coles took on the role of Om Unit in 2009 and since then the English producer has been trying to challenge his audience by transcending the genres and styles he has discovered so far.

Evigt Mörker began composing music in 1996, amidst dense forests and a family deeply interested in music. After working in rock and punk bands, it was electronic music that changed his perception of this kind of artistic expression forever. It searches for sounds with ambiguous and hypnotic properties. A meeting with the dynamically evolving Swedish art scene in the late 1990s paved the way for his future musical compositions. In 2013, he founded his own publishing house, and released a part of Three (E.M.), which was well received by listeners and critics. In addition, he has worked closely with companies such as Northern Electronics and Semantica. His music is described as closely tied to Swedish melancholy, but never without a sense of redemption lurking in the shadows.

Laura BCR is a resident of Het Magazijn in The Hague. Her own productions saw the light of day for the first time in 2020 and she has been featured in both notable charity groups On Board Music.

Lovah is one of the main and most successful figures in the UK’s contemporary electronic music scene. Starting his career as one of the early dubstep producers and a member of the digital collective Mystikz, he finally got frustrated with the limitations of the genre, which prompted him to start playing and publishing? By his label Swamp81 – songs that stripped him of his “musical surplus”, leaving only the bass and “itchy” beats of the drum machine.

Young Dzban, or Tomek from Wrocaw – rapper, fisherman, poet, philanthropist and homie. He already has 7 releases, countless songs posted on the Internet, as well as collaboration projects with other rappers. In 2019, he released an album called EP “Life in the Parking Lot” which made him known. His album has been closed so far with the album named

2020 “Loved songs will not be played on Polish radio”

Olivia is a DJ, Producer and Promoter from Krakow. Her specialty is techno, electro and acid music. He is involved in organizing the series of events We Are Radar. She recently joined the Oramics collective, whose efforts are aimed at promoting the visibility of women and non-binary people on the music scene. He performs the role of Morskie Oko, along with Chino and Steffen Bennemann. He plays rough and dark sounds in his combos. Olivia is fascinated by the music of the ’80s and draws deeply from classic Detroit, electric and citrusy sounds, blending them with industrial music and cool wave-inspired sounds. In 2020, she released an EP called “The Dancing Snake” by Dutch label Pinkman. The publishing house has received positive reviews by the press, both Polish and international, and has earned recognition, among others, by Groove Magazine. Currently, it is preparing to launch its upcoming products, which will be released this year.

See also  Macron on the condition of improving relations with Great Britain. Johnson must keep his word on Brexit

Robert, Byyas, co-founder of Primeshit. Producer, singer, master of ceremonies. unified. Co-author of crews like Napszykłat i Syny, author of the solo albums “Przeknaj” and “No Fun”, vocal collaborator of characters as different as Adam Gołębiewski, BNNT, Łukasz Rychlicki, Jan Klata or the duo Coals. Rapper by choice, tried by calling, primitive by conviction. A fearless rapper, an experimenter whose creative paths have led from tight spaces to the stages of major music festivals, Primitive (Esta) has turned his naivety into strength. The sound of the city, dorms, blocks of apartments and the people who live in them, elderly people with problems and children in the foreground. One of thousands, and yet he is completely unique among those thousands. Piernikowski will present a live ensemble based on previously unreleased instrumental material and the film’s soundtrack. “The World Is Like an Echo”, which premiered on April 15, 2021.

Ribé is a synthesis of a whole life devoted to techno, without taboos, without rules, but with hardness, austerity and a bleak desire to create new sounds.

Born in Poland but based in Rotterdam, Satl is one of the main representatives of the new generation of Drum & Bass producers.

By manipulating rhythms and frequencies, Sansibar transforms intergalactic cosmic rays into sound that travels from top to bottom. Sansibar is a producer and DJ from Helsinki. He’s played all over the world, from big festivals to small club parties. Previously, Sansibar released music in various versions for companies such as Natural Sciences, Émotsiya, Darknet and Unikanie.

Born in 1989, Simone Giudice is a composer who enters the world of musical experiences through the club door. His focus on techno and dance stems from a deep study of sound during his academic studies in electro-acoustic composition at the Santa Cecilia Conservatory in Rome. In his journey as a sound designer, he constantly oscillates between intimate ambient music, drone music, and experimental soundtracks, as well as the exotic rhythmic forms of ambient techno. In 2016, he co-created the pilot project A/V Meta – EP Release at Kabalion Rec. He held many artistic residencies. His first solo album “Oltre” was released by Delirio Rec. His second album, “Materia”, released in 2021 by Semantica Rec. .

SK.EIN is a solo project of Sergei Kravchenko, a Belarusian artist, engineer and member of the band Port Mone, who recorded his debut album under the watchful eye of Jacaszek during his stay in Gdańsk. Prior to that, Sergey had been exploring different levels of music from an early age, incl. He plays drums in a punk rock band, a reggae band, ending with the project Paparis, in which he improvised “on the rhythms of krautrock and minimal techno”. The one thing that has never changed is the obsessive habit of recording literally everything you can. This, in turn, combined with the architect’s structural thinking, natural inclinations to improvise and experiment and love for ambiance and simplicity, resulted in the exceptional album “Crossfades”.

Head of Future Retro London and a fan of everything related to Jungle, Drum & Bass and Hardcore. His prodigious output as producer and legendary Future Retro London label earned him fame as an artist at the forefront of a new wave of woodland, drum and bass.

Young Majli is the pen name of Marta Malinowska, a DJ and radio host who lives in Warsaw. MARTA is currently broadcasting on Radio 357, the spiritual successor to the Legendary Three. Although it has moved to the capital, it is still strongly associated with the Wroclaw scene centered around the Order’s Brigade team. Her sound has firmly marked the cultural melting pot of UK and New York bass music since the early 10s, where R&B melodies collided with the beats of icy dirt. However, this is just the beginning of her style. As a member of Regime, a group that promotes the most exciting local arts and music through its brand and events, Marta has quickly become one of the most influential figures in the world of standard non-technical club music in Poland. She is known for her smooth, eclectic mixes.

The Dead Osa – Born in 97, Cosmos in Wroclaw. An artist who can not be called a rapper or a rocker, but with a clear conscience can be described as one of the most interesting voices of the domestic underground world of the end of the second decade of the twenty-first century. Like everyone else, he can capture the narcotic and depressive spirit of the present in the form of a short, dirty, catchy song. At concerts, his fans spin the windmill under the stage as they do at parties.

Don't Miss it Wina is my friend [ZDJĘCIA]
Up Next Greece, Mykonos / Mykonos. New pandemic restrictions from July 26. Tourists give up their holidaysعطل