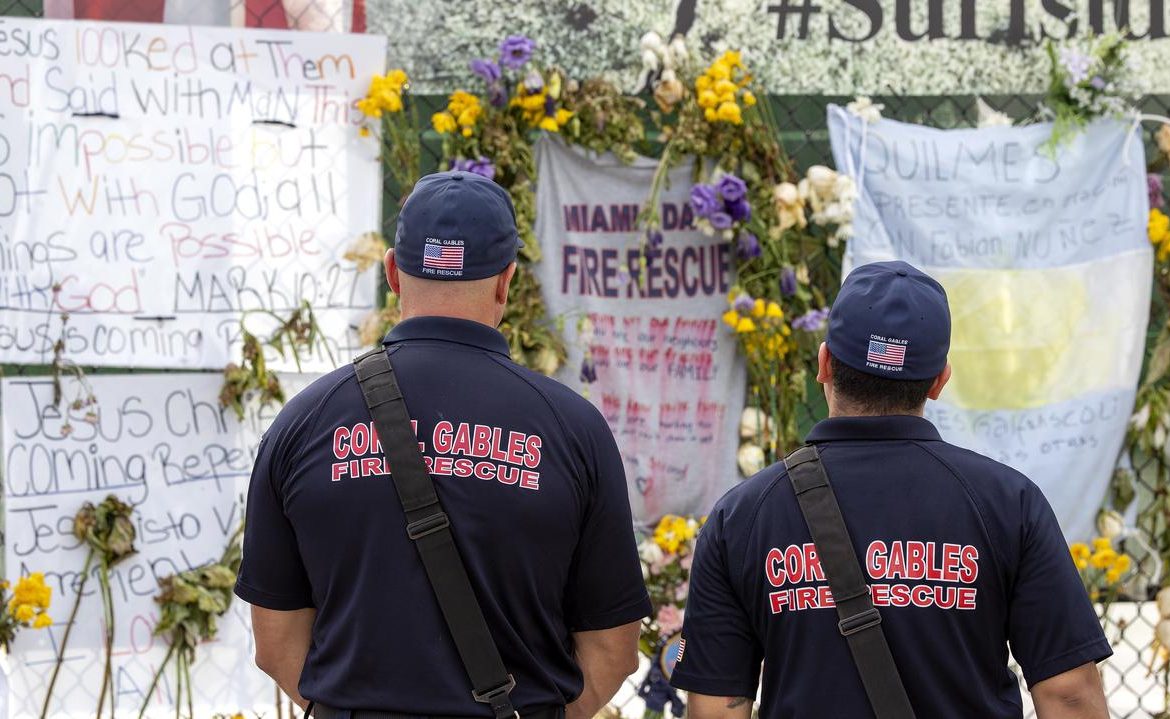 Emergency services said Thursday that six more victims have been pulled from the rubble of an apartment building that collapsed two weeks ago in Surfside, Florida. This brought the total number of deaths to 60. Rescuers completed the search and rescue operation. They are only cleaning up the rubble for corpses.

The bodies of 60 victims have so far been found in the rubble of a collapsed apartment building in Surfside, Florida, local authorities said. Six of them were reached on Thursday. According to the rescuers, efforts to find survivors were over.

Rescue dogs and the device that detects sounds will be removed, and only the passage through the wreckage will continue in search of bodies. At the same time, services began to prepare the families of the missing for the worst.

The chance of being found alive is zero.

– Our only responsibility at this stage is to close the case. The chance of finding survivors is nil, Miami Fire Department assistant chief Dread Jadallah said Wednesday. There are still about 80 people wanted.

His words were confirmed by Daniela Levine Cava, Mayor of Miami-Dade County. “It is with great sadness that we have made the very difficult decision to move from search and rescue operations to recovering bodies,” she said at a news conference.

According to the Associated Press, for two weeks from the day of the disaster, rescuers confirmed that they were focused on finding survivors, and hope returned after demolishing the part of the building that had not collapsed. Then it became possible to reach new areas of debris where there could be “emptiness” or “open pockets” in which someone could live.

Some of these empty spaces were there, mostly in the basement and parking lot, but no people alive. Instead, dozens of dead people were recovered. With the building collapsing at night, several dead were found in their beds.

Most of the families of the missing have already succumbed to the worst. “For some, it’s a relief when they know and can just finish this chapter and move on,” said nurse Maggie Castro, who spoke at a daily briefing about the aftermath of the disaster.

The apartment building, named Champlain Towers South, partially collapsed around 2 a.m. (8 a.m. Poland time) from June 23-24. The building, built in 1981, right next to the beach, once housed more than 130 apartments. The Washington Post reported that the 40-year-old home collapsed just a day after it successfully passed a building inspection.

On July 4, part of the building that did not collapse and poses a danger to emergency services was demolished. Surfside belongs to the greater Miami area and is known as the center of the Orthodox Jewish community and also as “Little Argentina” due to the large number of immigrants from the country.

Don't Miss it USA: According to the New York Times, cyber attacks are testing borders by the Russians
Up Next The owner of RomUniverse owns 3.5 thousand. years to pay off Nintendo. However, he was unable to pay the first installment