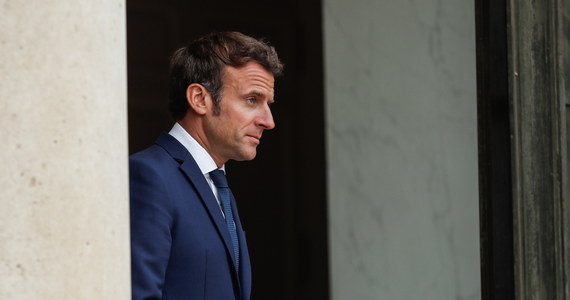 On the 100th day of the Russian invasion of Ukraine, French President Emmanuel Macron said in an interview with the French regional press that “Vladimir Putin made a historic and fundamental mistake.” “Russia should not be underestimated,” he added.

I believe – and I told him this – that he made a historic and fundamental mistake for his people, for himself and for history. It is isolated Macron announced.

Being trapped in solitude is one thing, but knowing how to get out of it is a hard road Macron was saying.

The French president added that he did not “rule out” a visit to Kyiv in the near future. Macron was repeatedly invited to Ukraine by President Volodymyr Zelensky, but he has not used this opportunity so far.

French Foreign Minister Catherine Colonna traveled to Ukraine on Monday. I spoke to the head of the Ukrainian diplomat Dmytro Kuleba and President Zelensky.

We should not humiliate Russia so that more relations can be built through diplomatic channels on the day the fighting stops Macron said.

However, he admitted that he wanted to increase financial and military support for Ukraine. And finally, do everything possible to remove the grain from Ukraine – added.

Agence France-Presse indicated that Macron denied the statements of Russian President Vladimir Putin, who said on Friday that reports of Russia closing Ukrainian ports are a “hoax” by the West, in an attempt to hide its political mistakes.

President Macron also promised to deliver more Caesar self-propelled guns to Ukraine. I asked our entrepreneurs to speed up the production of weapons, it is not only about restoring our stock, but also to strengthen our independence – He argued.

Last Saturday, Putin spoke with the French president, as well as with German Chancellor Olaf Schulz.Macron and Schultz appealed to the Russian leader Sr. Immediate ceasefire and withdrawal of Russian forces.

They also called on Putin to make a serious pledge, Direct negotiations with the President of Ukraine, Volodymyr Zelensky and finding a diplomatic solution to the conflict.

Macron and Schulz Putin also called for this Opening the port in OdessaTo enable the export of grain from Ukraine and release 2.5 thousand. Ukrainian fighters who fought at the Azovstal plant in Mariupol, where they were captured by the Russians.

According to the Kremlin statement, Putin was to tell Scholz and Macron that Russia is ready to resume negotiations with Ukraine and discuss ways to enable Ukraine to resume grain supplies from the Black Sea ports.

Don't Miss it Uma Thurman will play the US President in the latest “Red, White, and Royal Blue” movie.
Up Next ‘Abandoned is not in development.’ The game is a simple cheat, the introduction is production development financing