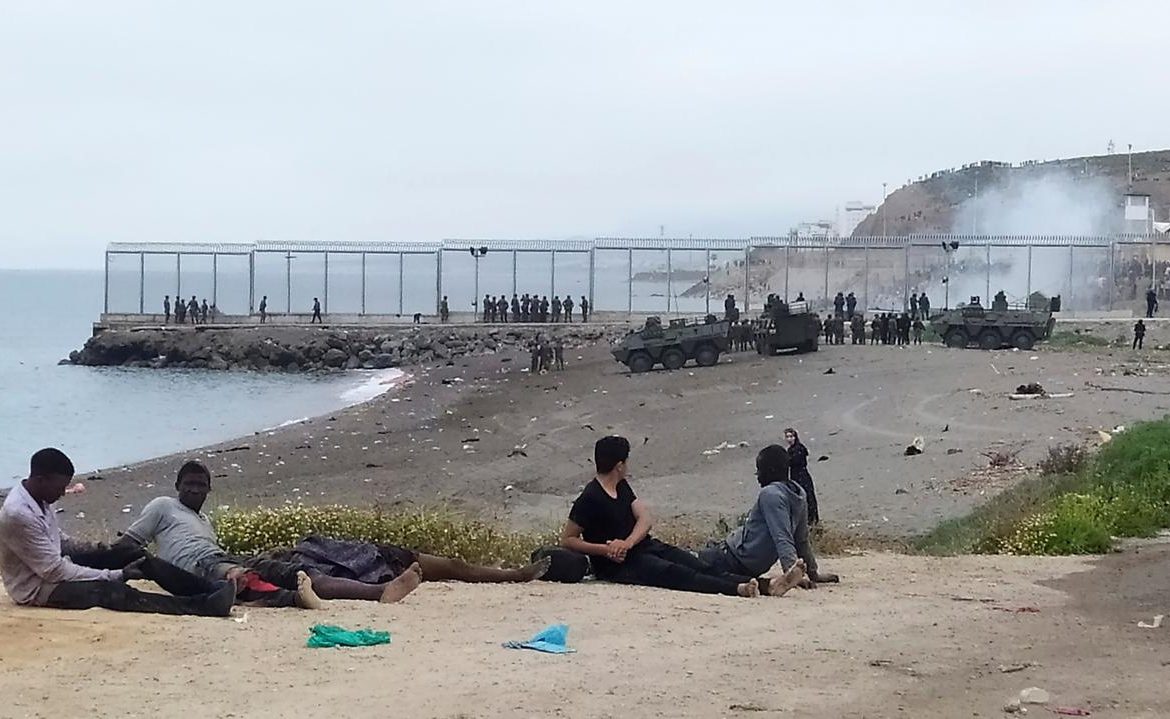 Local authorities said at least 5,000 migrants arrived on the coast of Ceuta, a Spanish enclave in North Africa, on Monday, declaring this a daily record. Among the new arrivals were nearly 1,500 children, most of them from Morocco. One person died at sea.

Spanish police reported 1,000 migrants on Monday. Later, a spokesman for the Spanish government delegation announced that a total of about 5,000 Moroccans arrived in Ceuta on Monday, of whom about 1,500 were minors. He added that one person died while crossing the sea.

Reuters reported that “Crowds, mostly young people, landed on the beach, and some were running, and some showed thumbs.” More immigrants continued to flow throughout the day.

According to the Spanish Interior Ministry, some migrants were supposed to swim hundreds of meters between Moroccan beaches and the Spanish enclave. Others arrived on makeshift boats, inflatable wheels, and inflatable boats.

The Spanish authorities immediately ordered an increase in the presence of their security services in the region, according to Reuters. “Spain will remain calm,” said Spanish diplomat Arancha Gonzalez Laia. She said that the authorities had already started returning migrants to Morocco. She added that the governments of the two countries are in contact on this matter.

Some media outlets in Spain claim that the negativity of the Moroccan border services in the face of the increasing collective practice is Rabat’s revenge for accepting Ibrahim Ghali, head of the Polisario Front, who is fighting to secede from Moroccan Western Sahara, into one. From Spanish hospitals.

The Moroccan Ministry of Foreign Affairs expressed its regret at the decision of the Spanish authorities to accept Ghali and conceal this fact from the Moroccan authorities. The ministry confirmed in a statement that the matter may affect the bilateral relations between the two countries.

Madrid’s La Razon daily reports that the number of illegal immigrants swimming several hundred meters between the Moroccan coast and Ceuta has increased in recent days. In turn, the newspaper “Alvaro de Ceuta” reports that since April 26, when about 100 illegal immigrants swam hundreds of meters from the Moroccan coast into the Spanish enclave, Rabat has not regained control. The newspaper claims, citing illegal immigrants, that Morocco has withdrawn from control of the coast for nearly 80 kilometers between Tangiers and Ceuta.

“I cannot speak on behalf of Morocco, but they told us this afternoon that (the arrival of migrants) is not due to a conflict (in Gallego),” Gonzalez Lya said. She added, “Spain has made this very clear and detailed.” – This is a purely humanitarian matter, the minister emphasized.

Don't Miss it The roof in Warsaw Hub. Rooftop bar with great views and local drinks. This is the case in Warsaw
Up Next Elizabeth II planted an oak tree. This is how I opened the seventieth anniversary celebration …