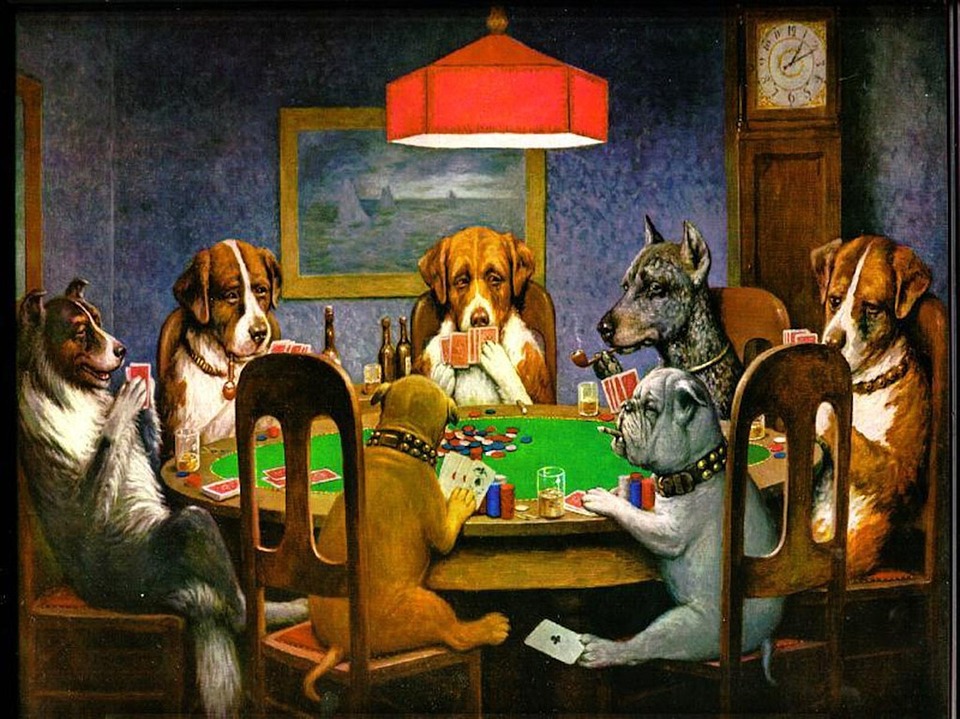 Whether you’re a keen poker player or a serious art lover, you’ll no doubt be familiar with the painting, Dogs Playing Poker. Unknown to most people, however, the title refers to not one image, but a series of oil paintings created between 1894 and 1910.

Painted by American artist Cassius Marcellus Coolidge, the series of 18 images depicts anthropomorphised dogs smoking cigars and playing card games. The paintings were part of an advertising campaign commissioned by Brown and Bigelow to sell cigars.

Perhaps the most well-known of the paintings, the one which most people picture when thinking about the artwork, shows a group of seven dogs sitting around a table playing poker.

So, what makes this iconic painting series so impactful?

Humour has been used by artists throughout history as a means to escape the struggles of reality and everyday life; to shed a positive light on social or political issues while also conveying a strong message.

Throughout his Dogs Playing Poker series, Coolidge uses humour and satire with a hint of irony. His canine subjects are caricatures of the middle and upper class gentlemen of the time, mocking and ridiculing their overindulgent and lavish behaviour.

Obviously, the paintings are humorous on their own, purely by showing animals partaking in human activities. Dogs attempting to hold and deal cards with paws is surreal and goes against the principles of reality. However, what at first seems like an example of light-hearted comedy, on closer inspection, actually reveals cynical humour as part of a socio-political commentary.

By showing the dogs engaging in human behaviour, the artist is not only giving the viewer a laugh, but he has created characters that they can relate to. The paintings show the dogs displaying timeless human traits that we can all imagine doing ourselves in some form. Whether you enjoy playing table games or having a drink with friends, there is something in the paintings that everyone can connect with.

See also  China. The hypersonic rocket was to orbit the Earth in a low orbit. The United States has concerns about China's missile tests

You might get your gaming session online, with sites such as GGPoker, but you will be able to look at the paintings and recognise specific poker hands. For instance, in one of the images, a canine player can be seen holding four aces and a queen. Viewers who are familiar with the game will know this as Four of a Kind, which is a lucky hand, and will therefore perhaps feel a sense of empathy with the subject.

There is no doubt that the Dogs Playing Poker paintings are iconic images within popular culture, but they were not always so highly revered. As the series was commissioned for commercial purposes, art critics originally disregarded them as mere kitsch. It was not until around the 1970s that Coolidge’s Dogs Playing Poker enjoyed a revival and started to receive the recognition it deserved.

Not only are the images from Dogs Playing Poker now seen everywhere from items of clothing to internet memes, they are also becoming highly regarded among collectors. One of the series, Poker Game, was listed for auction in 2015 at Sothebys with an estimated value of between $400,000 and $600,000.

The painting shows four dogs around a table in a dimly-lit room playing poker while smoking and drinking; a bottle of whisky placed prominently in the foreground. Poker Game went on to sell for a whopping $658,000 – a huge contrast to the apparent $2,000-$10,000 that Coolidge sold his paintings for back in the day. Its impressive sale no doubt secured Dogs Playing Poker’s place in the art world’s list of highly revered works.

See also  US Army chips. It will be created by Microsoft

The images within Coolidge’s Dogs Playing Poker series are instantly recognisable and elicit a feeling of fun and affection. Although originally intended for advertising purposes and shunned by the art world, the paintings are now better regarded for the satirical messages in them that Coolidge attempted to convey.

Regardless of whether you play table games or not, there is no doubt that Dogs Playing Poker is a piece of artwork that we can all relate to in some way.