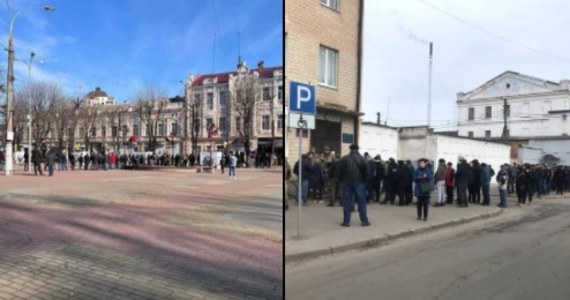 Ukrainian media reported that thousands of volunteers and reservists are waiting in lines in different regions of Ukraine to volunteer to defend the country.

I cant sit at home. I’ve been walking for the third day. First, I wanted to be a contract service, but age is no longer the case. I signed up for Territorial Defense – One of the volunteers quotes from the suspilne.ua portal.

One woman justifies informing territorial defense in a similar way. I can’t sit at home, I want to be useful in some way – She said.

The head of the Regional Center for Supplements and Social Support, Andrei Akimov, said that people aged 35-40 years report most often, and the procedure is simplified as much as possible: you only need a passport and an identification code. Everyone who registers will receive a uniform and a pistol.

There are also huge queues in Lviv. As Radio Swoboda writes, many men, as well as women, have military experience, and often these are groups of people who know each other and have walked the path of battle together.

Reservists are also advancing. This is not the first for me. In the years 2014-15 I was in the Luhansk region. They called me and I came here in two hours (…) We will help our boys, I have a lot of friends there. It may not end soon One of the men told the radio.

Thousands of volunteers also come to other regions, for example in the Żytomierz region.

Don't Miss it Inowrocław – Anna Szostak of Inowrocław in the 5th edition of “Ninja Warrior Polska”. We have pictures!
Up Next USA: Shchersky: Russia vetoed the UN Security Council resolution ordering Moscow to withdraw its forces from Ukraine