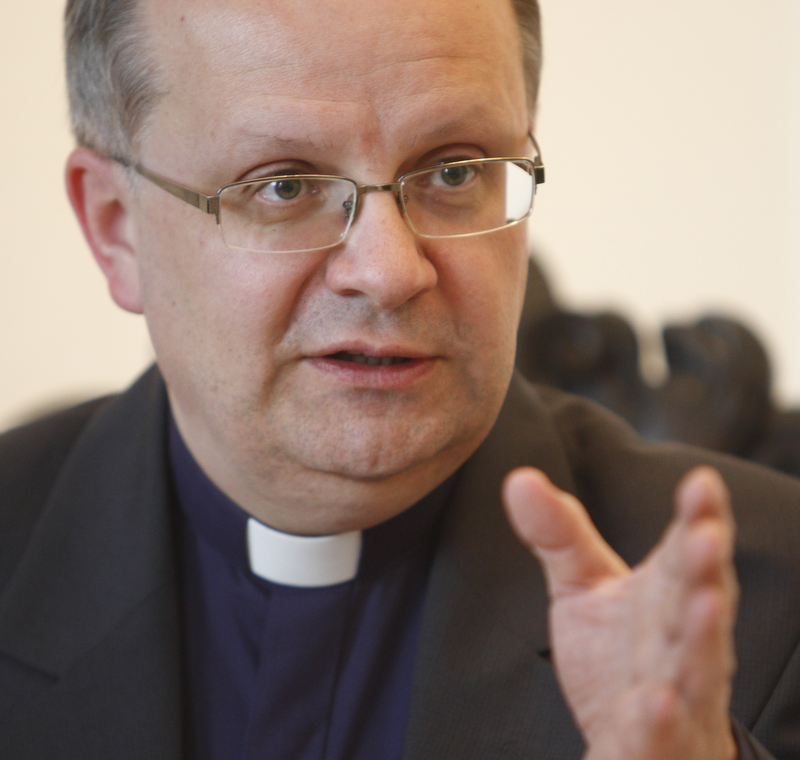 “I believe in the Church of Christ”

During the two-day meeting in Warsaw, the Pastoral Committee of the Polish Episcopal Conference discussed the draft pastoral program for 2022-2023. It is accompanied by the phrase “I believe in the Church of Christ,” which is an abbreviation of the Church’s article in the Confession of Faith.

The purpose of the prepared pastoral program is to rebuild the image of the Church and to awaken the faith in the Church, which today is weakening among believers. This is accomplished through, inter alia, the revelation and presentation of the whole truth of the Church – its mystery, its origin, its nature, its qualities and its structure. then by emphasizing also the salvific role of the meaning of the Church; It serves the salvation of mankind. Moreover, it is necessary to demonstrate the apostolic nature of the Church and its service character.

The above objectives must be carried out within the framework of: the proclamation of the Word of God and catechism to the parish, the continuation of the conciliar process, i.e. encounters, mutual listening and common discernment in the different parishes and church environments about what? The Holy Spirit says to the church, informative evangelism and present the truth about the church.

Moreover, it is necessary to make believers aware that the Church, as a divine and human act, is a mystery that cannot be grasped by reason and therefore “requires faith”. But the church is also “worthy of faith” because of God’s presence and work in it and the abundance of God’s gifts that man can draw from.

Moreover, it is necessary to take care of accepting the conciliar vision of an open and service-oriented communal church; Interest in good communication within the ecclesiastical community, creating a space for dialogue and meeting, and commitment to a greater quality within this community, especially on the line of the secular clergy and among Christians of different denominations, as well as promoting the idea of ​​mutual brotherhood. Love and compassion towards the “little ones”.

On the first day of the session, Fr. Valdemar Museo from the Secretariat of the Pastoral Committee.

A pastoral program is needed, especially in the historical context in which we are. The church should be spoken of in a simple way, showing the church as a trustworthy truth, a space to build fellowship with God and with people. In both sects we see certain crises. On the other hand, the implementation of the program in specific pastoral initiatives are just suggestions that will later be applied to individual dioceses and translated into pastoral activities, because the parish is the basic unit in which the Church is realized. There, we will inspire parish priests to take initiatives that will strengthen their faith in the Church, and show the Church as a community with God and a community of people among themselves, where it is worthwhile to build your daily life with an emphasis on salvation, because that is our goal – explained Father Kay. Musioł.
Show young people the value of faith

When Bishop Zaga was asked whether the subject of the pastoral program in the current secularization of Poland, especially among the youth, has the ability to focus more on the new evangelization and the search for its various forms, he affirmed that the whole pastoral project is really it. Aimed at the younger generation.

According to BP. The primary task arising from faith in the Church is “to live simply in the presence of God among us.” All this requires research. You can’t just bring down the church to a horizontal plane, which we often deal with, not just in the media. Also, people inside the church often do not understand that it is not some institution or organization, but the house of God for us, sinners on earth, who helps us to constantly respond to the call to holiness – added the priest.

He also gave the lecture on the first day of the session Fr. the professor. Doctor Hub. Przymesław Artmyuk (UKSW), who introduced the topic of fraternity into Pope Francis’ teaching.

Media – a space to talk about the church

The guest of the parish committee on Thursday was the spokesman for the Polish Bishops’ Conference, Fr. Leszek Gęsiak SJ, who spoke about the pastoral challenges of the Church in Poland in the context of media coverage.

He noted, inter alia, that today the media constitute the primary space for transmitting information, but have also become a shaping tool. The Church cannot think of implementing any pastoral program without considering that this program must be presented and promoted in the media. the father. Gęsiak requested that the media not be overlooked as a venue for both evangelism and the implementation of the pastoral programme.

– said the father. Valdemar Museo. He also stressed that it is about “trying to rebuild the image of the church, and to speak about the church and its work – which constitute its identity and mission – in a positive way.”

– We want to show that the Church is worthy of faith, that it is not only a horizontal truth, but is above all a sacrament that we cannot fully comprehend with a human understanding, although it is difficult in media coverage – admitted the Father. Musioł.

As he added, the language of facts, experience, and testimony will certainly be important at every stage of the new pastoral programme, not just language built on theological formulations. This language of concrete facts is used by the media.

The other speaker was the father. the professor. Doctor Hub. Maciej Ostrowski (UPJPII), who presented pastoral challenges regarding immigrants coming to Poland who are already in our country.

– Offered among others possible solutions at the parish and diocese level so that the evangelical call to accept refugees whose lives have been specially tested – reported in an interview with KAI speaker speech, Rev. Valdemar Muciac. – we have heard advice on how to carry out the pastoral care of immigrants, how to invite them to participate in the creation of parish communities, to integrate with the communities, and if they are believers – also to create a common pastoral liturgy, but above all to build a platform for encounter and to eliminate prejudices and fear that sometimes appear in our society due to the presence of People from other cultures.

Synodalism as a challenge to the Church in Poland

As Bishop Andre Zaga, Chairman of the Committee on Pastoral Care at the Educational Center stressed, the pastoral program takes into account the ongoing synodal process. “We are very concerned that this unobstructed synodal reality, to which Pope Francis presents us, becomes firmly rooted in the Church in Poland and continues there. That it will become a natural way and a way of working and life of the ecclesial community. “This will lead to a responsibility,” said Bishop Zaga. A greater commitment for Catholics to this community, a greater commitment and, finally, a greater message.

This topic was taken up at length on the first day of the session in his address to the father. the professor. Doctor Hub. Tomasz Wielebski of UKSW, President of the Polish Association of Shepherds. He emphasized that the Synod around the Synod, which began last fall at the initiative of Pope Francis, is progressing and developing slowly in the Church in Poland, which provokes various reactions from the clergy and the lay faithful.

After examining various sources (diocesan websites, available in the media coverage space and personal conversations with laity), Rev. the professor. Wielebski stated that the conciliar process is currently in various stages of development in individual parishes.

Some dioceses publish didactic documents on the substance of the synod (Vademecum) and specially prepared special materials containing not only selected ideas of the Church’s teaching on this subject, but also detailed collegial consultative meetings of the parishes. In some parish sites, it is also possible to fill out the congregational questionnaire individually in writing, in audio or video form.

However, there are also dioceses that only vaguely mention the ongoing synod, and casually encourage the holding of synodal consultations. On the other hand, on the website of some parishes there is no mention of a synod at all.
Synodal interests

Analysis of media reports and first impressions of participants in congregational meetings in some dioceses, Fr. Wilbsky noted that the application of the idea of ​​conciliarity in dioceses may be hindered by the clergy, which is expressed in the negative attitude of some clergy towards the laity.

According to the participants of the consultative meeting in the Diocese of Warsaw, some clergy look at the laity, ignoring their skills, knowledge and qualifications. It has also been pointed out that the clergy is also tested by some bishops who “direct more than listen.” Therefore, the need to change the thinking about the role of the laity was emphasized, because they, together with the clergy, constitute the Church and also through the action of the Holy Spirit, by sending them to other laity.

Among the concerns expressed at the meetings on the synodal path, the speaker noted, inter alia, the views that the synod would be conducted in the image of the Synodal Way in Germany and would lead to profound doctrinal changes exemplified by the Protestantism of the Catholic Church. There were also fears that the Synod would come up with liberal ideas that would change the Church’s doctrine.

Synod participants also criticize the language of documents and auxiliary materials, paying attention to the elaborate language, far from modern, difficult to understand for the ordinary recipient. Some participants hope, however, that if all are open to synodal work, the responses that reach the Vatican will be profound and revealing, developing new models of pastoral work and giving a new breath of the Holy Spirit.

In conclusion, the father said. the professor. Vielbsky stated that one of the main reasons for the misapplication of the idea of ​​collegiality was the lack of proper ecclesiastical awareness among some clergy and laity. It is about the theological understanding of the Church as a community of God’s people and the idea of ​​a council. These two dimensions are closely related to each other. We need a continuous formative work between the clergy and the laity in order to convey the correct theological vision of the Church understood as communion, and from this perspective to show the question of collegiality – said the speaker.

When explaining the ideas of the Synod, it is necessary, therefore, to prove that the Church lived in a synodal spirit since the beginning of its existence. In encouraging the application of the council, attention should be paid to the importance of the priestly council, the diocesan parish council, and the parish and economic parish councils.

It is also necessary to translate the theological vision into the practice of the life of the Church. For example, different types of workshops are needed to help everyone, clergy and lay people, acquire and develop the skills necessary for the practice of the Synod. One must speak with appreciation of those dioceses where a number of auxiliary materials have been prepared to show how the idea of ​​conciliarity can be applied in practice.

Don't Miss it Australian Open 2022: Iga Šwijk met his opponent. Favorite Polish?
Up Next Eurovision 2022. Who will participate in the Polish primary elections?