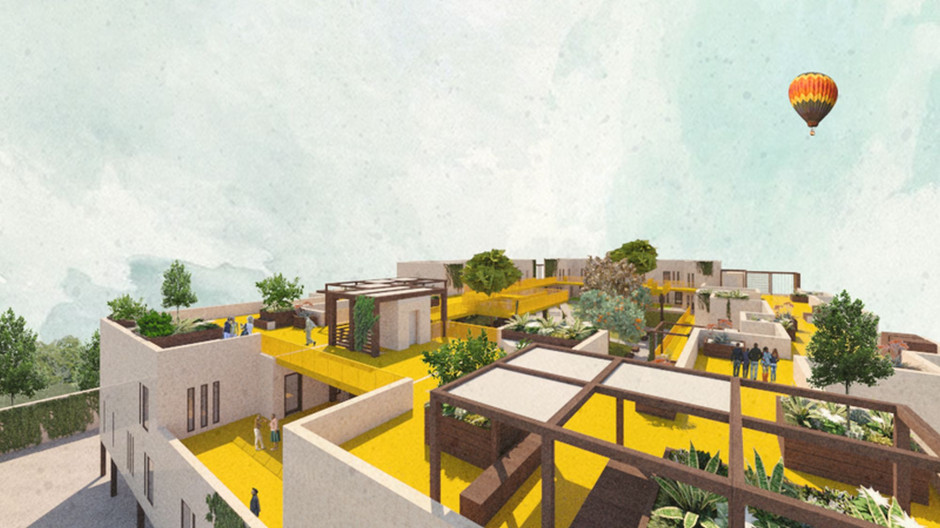 Julia Aliuka and Zuzana Orlovska, architecture students at the Wroclaw University of Technology, won the international Co-life 2.0 competition. The challenge was to design a common living space for the elderly in Cape Town. Students suggested brick walls made of…plastic – created by Nzambi Matee in response to the recycling problem in South Africa.

Therefore, the participants in the competition had to look for solutions to encourage the residents to integrate and engage in the life of this small community. As the organizers of “Co-life 2.0” emphasized, traditional centers for the elderly increase loneliness, preferring to isolate the elderly in their rooms. The space was designed to provide space for about 50 residents between the ages of 60 and 85.

Use an urban planner

Julia Śliwka and Zuzanna Orłowska, students of the Faculty of Architecture at Wrocław University of Technology, carefully analyzed, among other things, social issues in South Africa and local housing. They drew attention to the fact that, for security reasons, settlements in this country are usually fenced off with a wall.

– To avoid this separation, we decided to use urban planning, that is, we designed the building in the shape of the letter “O” – says Julia Śliwka. – In the center of the complex there will be the main communication road leading to the stairs leading to the first floor.

The students planned three types of apartments: two, four and five people. Each apartment will have a common kitchen and lounge, and a private area consisting of a living room, bathroom and bedroom. Each of these spaces will be adapted to the needs of people with disabilities. The apartments on the upper floor will have a balcony or terrace.

The terraces will also provide additional walking paths above the ground and provide additional shading on the lower levels (which is of great importance in the South African climate). There will be pots with green spaces, a pergola, benches and hives for bees.

– The essence of our project was also to create a green enclave that would change the microclimate inside the estate – confirms Zuzana Orłowska. – That is why we planned a system of holding tanks and a large number of plants, as well as on the green roof.

The walls of the building will be made of bricks made of … plastic – Designed by Kenijka Nzambi Matee in 2018 in response to the recycling problem in her country.

– This brick is made of shredded plastic that cannot be recycled and mixed with sand and clay – says the student. – This product is then pressed and shaped properly. Plastic bricks are a controversial topic as there are still discussions about potential side effects, such as the effects of sunlight or water on this material. That is why we suggested protecting it from the outside with a bandage that protects against UV rays and does not react with water.

Plastic bricks will insulate the building well, while the wooden beams will be the load-bearing element.

The authors of the project emphasize that the choice of plastic bricks as a building material was not accidental. Their concept largely focuses on the topic of waste management. They have also planned a restaurant that serves a hot meal in exchange for a plastic bag, which may encourage locals to collect and recycle the plastic.

The winning design for the center was created as part of a housing engineering course for seniors, conducted by the architects: the professor. Barbara Gronostajska and Dr Anna Miśniakiewicz.

See also  The latest deaths, cases and infection rate with the Coronavirus in Leeds on September 27
Don't Miss it Ferrari wants to follow the blow. This will surprise his competitors
Up Next Solos: The axes of talks between President Duda and Prime Minister Johnson…