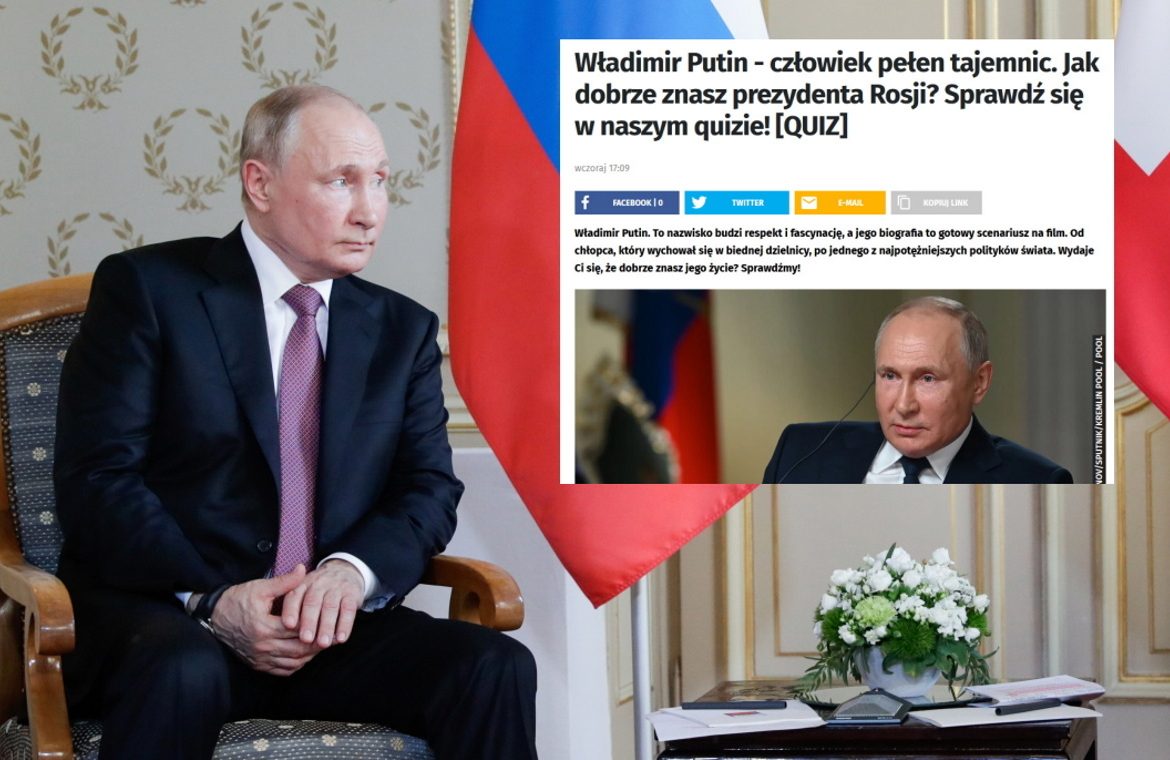 “A man full of secrets”; “This name suggests respect and charm.” Who are we talking about? According to Onet reporters…it’s about Vladimir Putin. The portal created a short quiz on the Russian dictator.

Read also: Few details, but there were … gifts. Biden gave Putin a bison statue and a pair of sunglasses

Onet.pl has published a test on its website where you can provide answers about Vladimir Putin. The former KGB agent, who ruled the Kremlin, was presented as a man whose “biography is a ready-made script for a movie.”

The portal encourages you to test your knowledge about the life of the President of the Russian Federation.

Vladimir Putin – a man full of secrets. How well do you know the president of Russia? Test yourself in our quiz!

Russian President Vladimir Putin. This name suggests respect and fascination, and his autobiography is a ready-made script for the film. From a boy growing up in a poor neighborhood to one of the most powerful politicians in the world. Do you think you know his life well? Let’s check it out!

What does the portal ask its readers?

In which martial arts does Putin have a black belt? ; “What photo montage with Putin has become so popular that the Kremlin accepted it?” ; What did Putin say when he wanted to join the KGB?

– These are just a few of the dozens of questions asked by the portal.

The absurd test provoked a reaction from Internet users. Twitter users do not hide their indignation at the test about the Russian dictator.

See also  Arctic air in Europe. It is winter in Croatia

Onet test “Check what you know about Putin” is journalism’s greatest moment for a long time. One of the biggest in general, I think. Inspires respect.

For several days, the mailbox and its journalists have been distributing hack cards of Russian services, without any checking whether they are fake. Onet makes a test about the “cool” and “amazing” Putin. seriously. It is already happening. Tomorrow they will write that Nordstream2 is great and that Crimea has always been Russian

Quiz in knowledge about the killer Putin … Jprd. Fat Onet makes up 300% of the benchmark.

Apparently, Onet did a test – poll “Who is your superhero” – Batman – Robin or – Putin. They have momentum.

Short quiz about Putin en Onet, interesting questions, but there were no questions like “How many people were killed by intelligence during Vladimir’s rule?” , “Make a list of countries attacked by Russia during the rule of Vladimir”, “Provide a list of countries in which Russia interfered in the election results”.

Protasevich, Navalny, and Khodorkovsky should do this test for Putin.

Bartosz liked Putin, so he auditioned for Onet yesterday about this great statesman