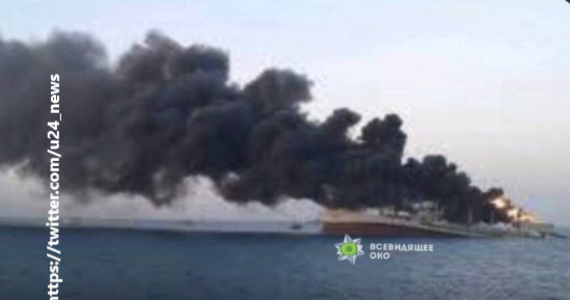 The Ukrainian armed forces fired on the Russian cruiser “Moscow”. It was this warship that attacked Snake Island on February 24. The head of the Odessa administration reported that the ship was hit by two Neptune missiles.

The Ukrainian armed forces attacked this evening the Russian ship “Moskva”. This is the same warship that the defenders of Snake Island have been told to ‘go on your own’ #FightLikeUkrainian #ArmUkraineNow pic.twitter.com/lAc1WV6mCH
– U24 (@u24_news)
April 13, 2022

According to information on social media, the Russian cruiser “Moscow” was badly damaged by the Ukrainian army. There can be up to 500 people on board.

The ship was about to be hit by two Neptune missiles, which started a fire on board.

Adviser to the President of Ukraine, Oleksiy Aristovich, confirmed the damage to “Moscow”, but did not say what caused the fire.

The Moscow cruiser was hit by two Neptune missiles guarding the Black Sea. It was badly damaged. It was confirmed that the Moscow missile cruiser I headed exactly today as it was posted by our border guards on Snake Island! “- said the head of the Odessa Regional Military Administration, Maxim Marchenko.

See also  fires in Turkey. Rescue the tourists from the endangered resort
Don't Miss it Brooklyn Beckham received a special wedding gift from his father. It’s classic with a modern twist
Up Next Ubisoft tempts new players. Play 100+ games for free for a week