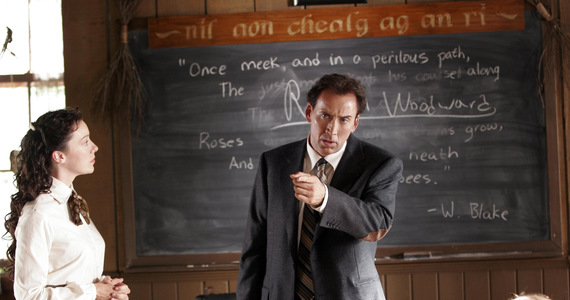 “Kult” was a remake of the 1973 British horror film of the same title, directed by Robin Hardy. It is considered one of the most important horror films in the history of cinema. What’s more, expectations for the new release were very high. Universal has been carrying the idea of ​​a remake since the ’90s. In 2002, it was announced that the film would be directed and written by Neil Labut, the author of popular low-budget films, including. Lovers next door and sisters Betty. The star and co-producer of the picture was Nicolas Cage, who was celebrating victories thanks to his double performance in “Adaptation”.

The developers of the new version quickly encountered the first big problem. It turns out that Hardy has been working on a sequel to his movie for nearly thirty years. Christopher Lee was due to return, this time in the role of a preacher. Vanessa Redgrave and Sean Astin were seen in the other roles. The project began to bear fruit only in 2011 and was released under the title “The Wicker Tree”. Hardy and Lee have made no secret of their critical attitude toward Labot’s edition. The director even demanded that his name be removed from the opening and closing credits of the new “Kult”.

The original was about a British policeman, who searches for a missing girl, who ends up on one of the Scottish islands. It turns out that the people who live there are members of a pagan sect. Labot changed the starting point slightly. He moved the action from Great Britain to the United States, and made the missing girl the daughter of the former sympathizer of the hero played by Nicolas Cage. The actor confirmed that the film would be a tribute to “Kult” since 1973. On the other hand, Labbott realized that Hardy would be judging his work against the original work and that some viewers simply wouldn’t accept it. No one expected the new “Kult” movie to turn out to be one of the worst films of the decade.

Critics realized that they were dealing with a failed business when press screenings were not made. Kult was released on September 1, 2006 and was quickly decimated by reviewers. Literally every aspect of it has been criticized. It was Labot, who had his first professional encounter with a horror movie. However, critics devoted most of their attention to Cage. Some wondered if the actor was sometimes unaware of the project’s weaknesses and thus allowed himself to fly away completely on set.

The protagonist he plays runs all the time, beats random members of the cult and shouts silly remarks. The most famous is the last scene in which the protagonist is tortured by bees that are allergic to it. This moment marked the beginning of a series of memes on the Internet. The scene where Cage disguises himself as a bear to hide from cult members has become “popular”.

The star of the movie “Adaptation” defended the film. He claimed that the creators wanted to make a black comedy that drips from the absurd right from the start. He later admitted that he was aware of Colt’s curiosity, but didn’t have to talk about it out loud. In 2012, he joked that he had an idea for a sequel set in Japan, in which his hero is a ghost.

LaBute received five Golden Raspberry nominations in the following categories: Worst Production of the Year, Worst Lead Actor (Cage), Director, Screenplay and Screen Duo (Cage and the Bear Costume). I lost in all of them. Raspberry fans weren’t impressed with “Naked Instinct 2,” the unsuccessful sequel to the action thriller starring Sharon Stone, and “Mały,” the toilet comedy by the Wayans brothers. However, it is “Kult” that is today remembered as the “best worst” movie of the period.

Don't Miss it The stars “pollute” the universe. Observations of a galaxy 500 light-years away confirm this
Up Next Scotland: Children’s return to school led to high rates of coronavirus infection