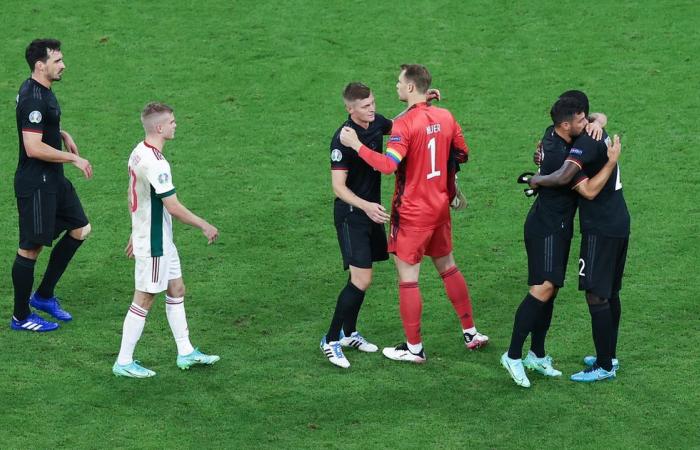 It is a fixture that normally has England fans trembling, as fixtures against Germany very rarely go the way of the Three Lions.

Gareth Southgate himself knows of the hurt that comes with losing to Germany, as the current manager was the player that missed the vital spot-kick at EURO 96, as England crashed out to Germany after a penalty shootout in the semi-finals.

Still, could redemption be on the cards for England, and Southgate in the round of 16 tie between the teams at EURO 2020 this summer?

England have managed to get through Group D as the group winners despite not reaching top gear just yet. It has been a stop and start campaign for Southgate’s side to this point, and it could be argued that it could be down to the fact that the manager doesn’t yet know his best team.

He rang the changes once again in the final group game against the Czech Republic, with both Jack Grealish and Bukayo Saka handed first starts at EURO 2020.

Both stars impressed throughout, and would have done wonders to their chances of starting in the next game. Saka was named Player of the Match in the win, as his directness was something that England was lacking in each of their first two games.

The quality of Grealish is known around the country, hence the outcry for the Aston Villa captain to be given his chance. It was a quieter night for Grealish, but he still registered his first assist at a major tournament, as he set up Raheem Sterling’s winner.

There were questions defensively about England before the start of the competition, but they are yet to concede a goal. Indeed, the Three Lions haven’t come up against a high-quality opposition, but that is a building block that Southgate can build on.

Harry Maguire’s return is also a huge boost, and the Manchester United captain looked assured on his first start for a couple of months.

Germany are yet to really get going in the EUROs this summer, as they have shown glimpses of what they are capable of, but have also been very disappointing in patches.

They didn’t lay a glove on France in their opening group game, as they suffered a 1-0 defeat. However, with their backs against the wall, they produced a mesmeric performance to hammer Portugal 4-2 in their following game.

Robin Gosens was in inspired form down the left-hand side in that game, as he caused no end of problems for Nelson Semedo. Running through that right flank like a possessed winning horse on the TwinSpires list of results, Gosens was on a roll.

The German wing-backs will be the main outball for them once again against England, and is something that Southgate must prepare for.

The Germans were disappointing once again in their final group game, as the narrowly avoided an embarrassing exit at the hands of Hungary in Munich.

Germany were within ten minutes of finishing bottom of Group F, but a late Leon Goretzka equaliser levelled the scores and gave Germany the four points that they needed to secure their passage.

See also  Sara Szy Cosmic Constellation: "It can fade away in an instant" | Sarah Szie

However, England would have taken confidence from the amount of chances that Germany gave up in that game, and should Joachim Lowe’s side be that vulnerable at Wembley, Southgate would be optimistic that one of his forwards would have the composure to take their chance.

Could It Come Home?

It’s fair to say that whichever team wins this round of 16 game would be extremely disappointed if they didn’t go on to reach the final. Both Germany and England have avoided being in the same half of the draw as Belgium, Portugal, Italy and France.

The winners of this round of 16 tie will face either Ukraine or Sweden in the quarterfinals, before a likely showdown with one of the Netherlands, Wales, Denmark or the Czech Republic in the semi-finals.

Fans are affording to dream, but the road is now set up for the Three Lions to finally reach a major final for the first time since 1966.

Don't Miss it F1. Lewis Hamilton spoke at the end of his career. Mr.’s plans
Up Next FOMO, FOGO, nie wiadomo | iMagazine