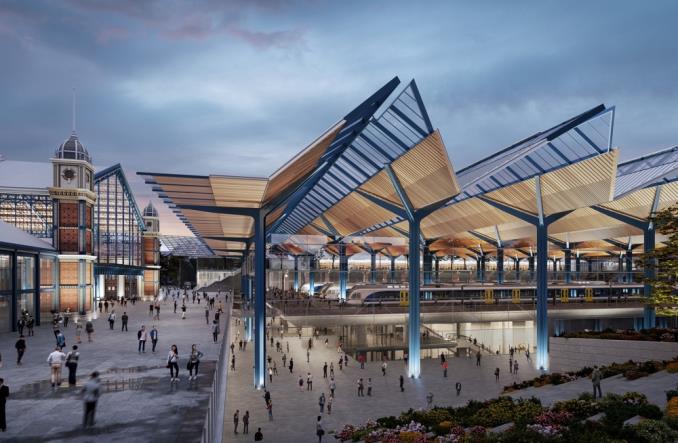 British firm Grimshaw Architects have won the international competition for a project to renovate the Nyugati railway station in Budapest. The company is known for projects such as railway and metro stations in London, Melbourne, Los Angeles and New York.

The design firm’s selection was announced by Balázs Fürjes, the Prime Minister’s Commissioner for Budapest and the conglomerate. We will rebuild the West Station into a modern, 21st-century building of three floors, partially hidden underground. The new project respects the past, Budapest’s architectural heritage and fits perfectly into the fabric of this part of the city, assures Fürjes.

Behind the Eiffel Hall (French engineer Gusto Eiffel was responsible for the construction of Nyugati Station), a new railway hall will be built with six underground and thirteen aboveground tracks. In this way, the entire station can accommodate several trains. There will also be a new green space around the facility.

Budapest also plans to arrange a post-industrial space adjacent to the western train station. – We are planning a comprehensive revitalization of the areas around the limited streets of Váci – Dózsa György – Podmaniczky – Nagykörút. It is the most urbanized post-industrial railway area in Budapest. Thanks to the renovation of 23.5 hectares, roughly two areas of Városmajor Park, the empty space will be converted into green spaces, reports Balázs Fürjes.

London studio among the winners

The architectural competition was announced by the Budapest Development Center commissioned by the government and the Budapest Cluster Rail Strategy Office. The candidates were to propose a modern communication center for connected travelers, among others a train station and a metro station. The winner was a team led by Grimshaw Architects from London, including Nautes Architects from Budapest, WSP Global Engineering, Vogt Landscape Architects in Zurich and Turnet & Townsend, a project management firm based in Leeds, England. The jury noted that the winning bid was not only beautiful, but also promised good use of the station to be commissioned later. The project was preceded by proposals among others the offices of the French group AREP of architects and Austrian design studio Albert Wimmer.

British firm Grimshaw Architects was founded in 1980 in London, but currently has a total of 7 offices – outside of London, as well as in Los Angeles, New York, Paris, Dubai, Melbourne and Sydney. Thanks to the projects of Grimshaw Architects, London Bridge Station, which serves 90 million passengers annually, as well as the Waterloo and Paddington terminal buildings have been renovated. The studio has also completed Fulton Center node projects on the New York subway network and new subway stations in Los Angeles, Amsterdam, Doha and Melbourne. Designers also worked on the appearance of London Crossrail stations planned to open, as well as the new British High Speed ​​Rail station – London Euston.

– The Eiffel Hall in the West Station is beautiful, but technically it is already outdated. The station itself no longer represents Budapest with dignity. The facility is inconvenient for passengers and few trains. This part of the city needs improvement so that more people can use the railways for agglomeration trips on a daily basis, says Palaz Forges, the prime minister’s commissioner for Budapest and the agglomeration.

The renovated Nyugati is set to become a modern railway station in the 21st century. The facility will be distributed over three floors, which will increase the capacity to handle a larger number of trains. A new platform hall with a total of 13 tracks will be built on the roof behind the Eiffel Hall. Under it, a six-lane station is planned. It will operate on suburban, long-distance and international trains.

See also  Cracow. Debate about Wissowa’s Future: “A Place for Art Born Before the Eyes”

– The underground station will serve as a main station for now, but we will build it in such a way that in the future it can be connected by a railway tunnel under the Danube to the stations of Budapest Deli and Budapest Nyugati, Vouris explains. He adds that Niugati will be one of the busiest transport hubs in Central Europe, Hungary and Budapest. – After the full investment is completed, the station will handle 300,000 people per day. Passengers – he says.

Thanks to the special structure of the roof, the architects got a distinctive facade and an entrance open from the side of Podmaniczky Street and Nyugati Square. The assumption of the competition was also to develop a facility that would not overwhelm the old hall with its appearance, and would also be an independent and separate block. With the blue color of the steel structure and wood paneling, it evokes the Eiffel Building. An interesting solution is to direct the ridge lines, that is, the roof line, perpendicular to the tracks. 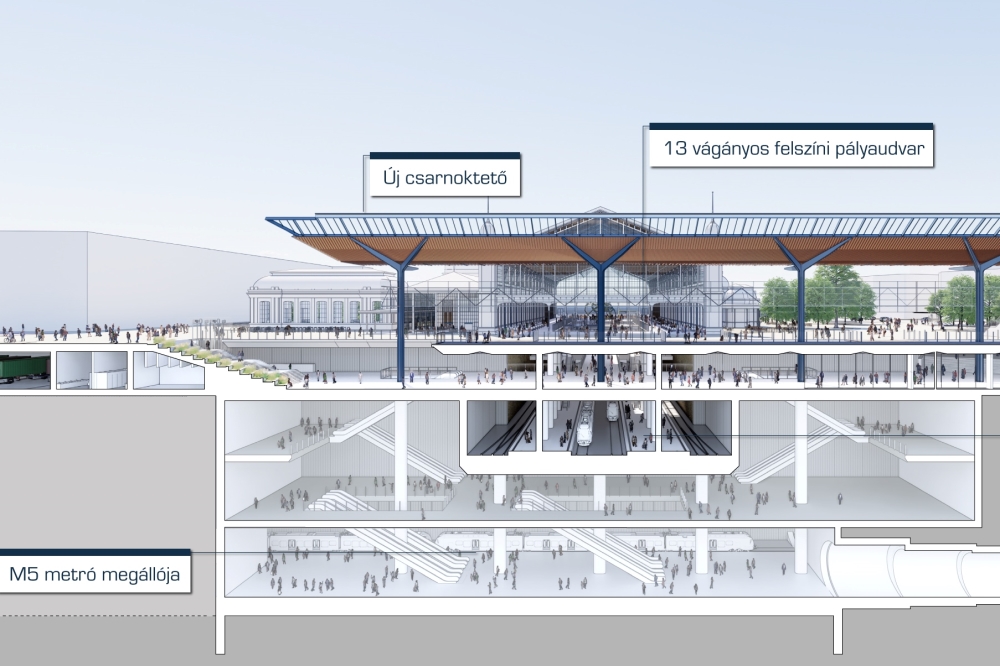