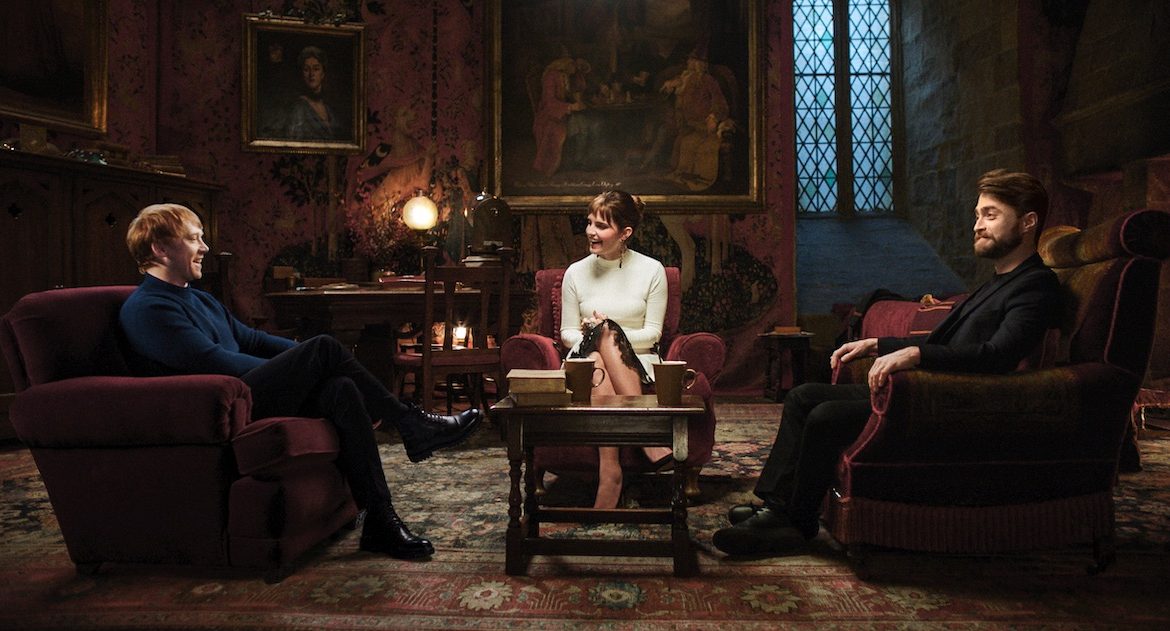 Actors, directors and producers participated in the program

Work on the set of the cult series narrated by: Daniel Radcliffe, Harry Potter movie, Rupert Grint (Ron Weasley), Emma Watson (Hermione Granger), Bonnie Wright (Ginny Weasley), Tom Felton (Draco Malfoy), Evanna Lynch (Luna Lovegood) Helena Bonham Carter (Bellatrix Lestrange), Ralph Finn (Voldemort), Robbie Coltrane (Hagrid), Gary Oldman (Sirius Black), Jason Isaacs (Lucius Malfoy). Directors were also invited to participate. Chris Columbus, the creator of “Home Alone” was responsible for the first two parts, and the third, which is considered the best, was shot by Alfonso Cuaron with his distinctive aesthetic, slightly dark and very individualistic. Then Mike Newell (“Four Weddings and a Funeral”) seized the wand, which in “Harry Potter and the Goblet of Fire” showed the “hormonal storm” through which the young heroes and their representatives are going through, and David Yates brought the saga to its end. – I wanted to show the heroes growing up, so the world around them gradually became bleaker Explain the creator.

Columbus in an interview with Daniel Radcliffe recalled how he discovered Harry Potter in the boy. When the cast was to be cast in Great Britain, the director auditioned for several hundred children. One look was enough for Watson to see Hermione Granger in Emma. – I was just Hermione. Since my dad Harry read to me, I knew I had to be in this movie Watson remembers. It was similar to Rupert Grint, who immediately took on the role of Ron. The last person to appear on the set was Daniel Radcliffe, who was spotted by Columbus in the mini-series “David Copperfield”. Little Dan’s parents did not want him to pursue an acting career. Producer David Heyman only managed to convince them that the boy should appear in acting. When Radcliffe, Watson, and Grint were asked to play a scene, the chemistry between the children was immediately apparent.

See also  Almost a thousand costumes have been prepared for Dune

The actors remember how much fun they had on set

– Chris let’s be kids Alfie Enoch and Tom Felton hailed Columbus for being close to young actors. All representatives of Hogwarts students agreed that they treated their classmates as schoolmates – they grew up with them, cheated and fell in love with each other. Sometimes they were having so much fun between shots that it was hard for them to focus on their work. The actors laughed that during the filming of “Harry Potter and the Goblet of Fire” everyone was going through adulthood, as were the characters, so the atmosphere was full of emotions.

Emma Watson admitted that she was a fan of Tom Felton

– We are very close to each other. we love each other – Watson was talking about Felton. She was three years younger than her teammate, had been charmed from day one, and he took care of her like an older brother.

The role of Bellatrix Lestrange, who killed Harry’s beloved uncle, Sirius Black, read a note from Daniel Radcliffe in front of the cameras. The young actor admitted that he admired the legend of British cinema. Radcliffe wrote to Bonham Carter: “If only I had been born ten years earlier…”. Actors for Harry, Hermione, and Ron agreed that they learned their craft during filming, from their older castmates who always took them very seriously.

Grint and Radcliffe admitted they didn’t realize how lonely she was on the set of Watson. – We were teenage boys, so it seemed impossible for us to say, “You know, I’m having a hard time” – They recall, emphasizing that Emma as a girl was the most difficult. Watson was afraid she could not stand the pressures of fame. So I thought about leaving the franchise after the premiere of “Harry Potter and the Order of the Phoenix.”

One of the hardest scenes was when Hermione and Ron kiss

Watson and Grint – old friends – couldn’t stop laughing when their heroes were finally, after seven films, about to kiss for the first time during the Battle of Hogwarts. – It was a terrifying sight Watson laughed. They were not helped by Radcliffe, who insisted on appearing on the set while shooting the difficult shot. In the end, Watson took matters into her own hands. – You went all the way, you did it perfectly Yates was saying.

Felton’s voice broke as he remembered his mother in the film, Narcissa Malfoy, played by Helen McCrory, who died last year. – You treated me like a son. Tom said. Richard Harris, Professor Dumbledore, and Alan Rickman, who played Severus Snape, had a huge impact on the lives of young actors. Interestingly enough, he was the only person who knew the end of the story even before it was written. Actress J.K. Rowling herself, who brought “Harry Potter” to life, asked about Snape’s fate.

Rowling, author of books on the young wizard, was absent

Rowling appears on the show, but only in the 2019 archive footage. She did not appear on camera with the filmmakers based on her story. For several years, the writer has been controversial with statements about transgender people. Although she tries to convince the public that she is far from anti-transgender attitudes, she has been recognized as TERF. Watson, Radcliffe, and Grint expressed their support for transgender people. Rowling’s representatives claim that the scandal with her participation is not the reason for her absence from the jubilee, but they do not give other reasons.

See also  The Kuźnica Cinema in Suchedniów invites you to the films "Skłodowska" and "The Sound of Metal" (video, photos)

– We are related to each other. forever. like siblings Representatives said. As they talked about their friendship, tears were in Watson, Grint and Radcliffe’s eyes. They have spent more than a decade together. Although everyone went their own way after the premiere of the last part of the saga, they still felt like family. They also admitted that they did not know who they were after the shooting ended. – Even my real name struck me as weird. I couldn’t do anything but play Ron – Grint was saying.

Don't Miss it Czarnek: We are not planning to expand distance learning; On January 10, full-time education returns
Up Next Dani Medvedev rehabilitated in the doubles. Historic victory for the United States