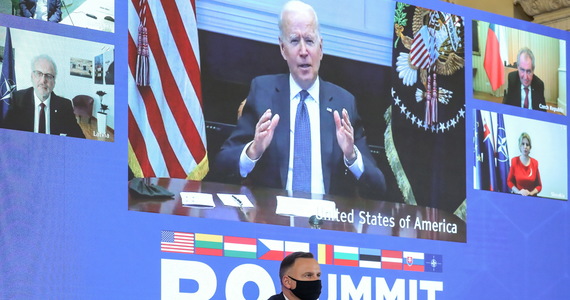 Power has changed in the United States, but not the strategic policy of the United States in building security areas and keeping the word of allies. President Joe Biden reaffirmed NATO’s commitments to our countries, as President Andre Duda said after the B-9 summit in Bucharest.

During a joint speech with Romanian President Klaus Iohannes, President Duda affirmed that the presence of the US President at the B-9 summit shows that “the Euro-Atlantic bonds are still alive”.

The interest of the President of the United States in our meeting, as an ally, as a member of NATO, as the largest army within the alliance (…), the commander in chief of this army, and stressed that Euro-Atlantic cooperation clearly shows that Euro-Atlantic cooperation is already alive in its very detailed aspect It is the eastern side of NATO, that is, only part of Europe, in addition to the side furthest from the United States.

The President assessed that the presence of the US President could be seen as “a very clear sign of the serious interest of the United States also in our part of Europe and our security.” At the same time, he drew attention to a portion of Joe Biden’s Monday speech, in which the US President strongly emphasized the fact that Article 5 Concerning Preparedness for Collective Defense is in effect “and the physical presence of the United States.” Forces on the eastern flank of NATO, and thus In our countries. “

In this context, Duda referred – as he said – to “the various ongoing discussions about the American presence,” and recalled that joint work with the Romanian president in recent years.

It is said that the United States will withdraw, and there are various rumors. I would like to stress one thing of the analysis for all who are discussing it. (…) In 2014, there was no military presence of the United States in this part of Europe, and there were no NATO forces here, except for our forces, which were, of course, members of NATO at the time, but not There was no presence of allies here.This presence is the result of our cooperation and work with the President to create the Bucharest Nine Formula, hosted by the President (Romania) here in Bucharest in 2015, the arrangements we adopted at that time, and which we subsequently submitted to the NATO Summit in Warsaw in 2016. Work on it all the time – Doda noticed.

André Duda also noted that during the “democratic” administration of President Barack Obama, “during his presidency, decisions were taken, also in the United States, regarding the American presence in the eastern flank, and of course the presence of NATO in the eastern flank.” President Duda indicated that these decisions were consistently supported and then expanded during the era of the next US President Donald Trump and his Republican administration.

– So the government changed in the United States, and the strategic policy of the United States continued in this area to build security zones and maintain the word of allies all the time. Today we have another American administration, we have the Democratic President of the United States again, President Joe Biden, who is at the 9th Bucharest Summit, affirms NATO’s commitments to our countries, and affirms the American presence in our part of Europe – emphasized Duda.

He assessed that the presence of the NATO Secretary General on board the B-9 “clearly shows the value of our cooperation as part of NATO in this part of Europe.”

Don't Miss it The White House after the B9 summit meeting with Duda: “Biden stressed the importance of democracy and the rule of law.” world News
Up Next PS5 DualSense with full remote play support on Apple devices