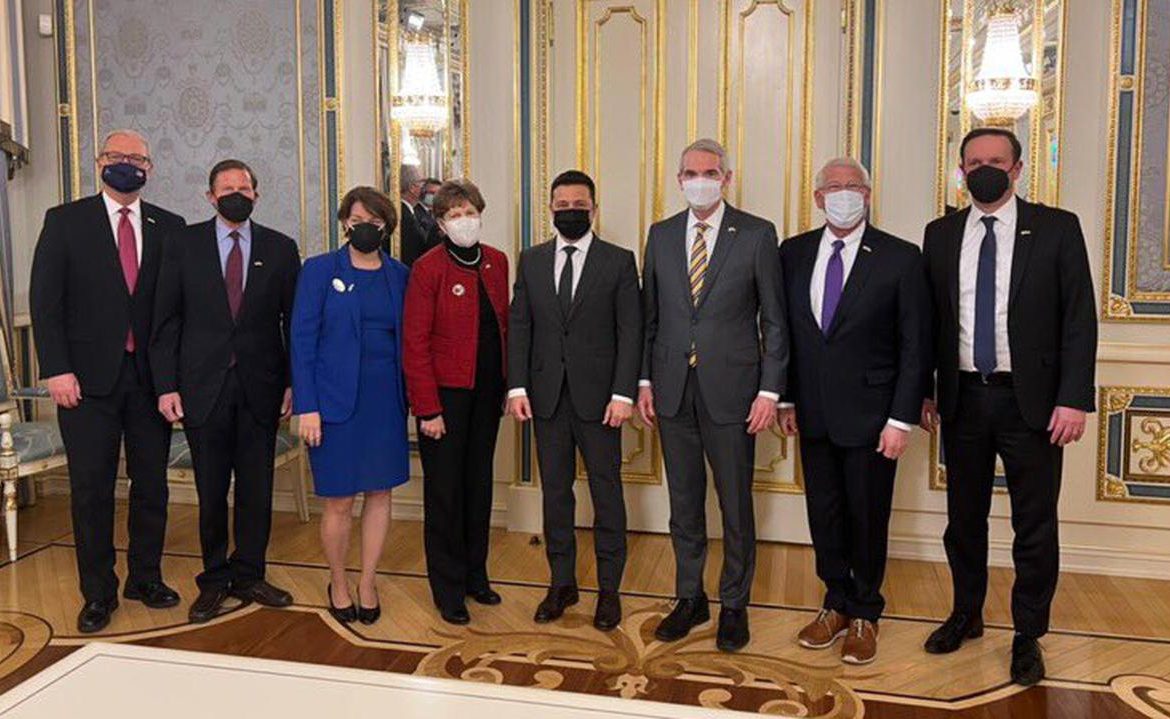 The President of Ukraine, Volodymyr Zelensky, during a meeting with the US Congressional delegation in Kiev, said that Russia wants to create a reason for escalation in order to “defend Russian citizens”, so Russian passports are constantly issued to residents of Donbass. Senators assured the authorities in Kiev that Russia would face “devastating sanctions” in the event of aggression, and that the Ukrainians would receive the lethal weapons they need to defend their lives.

Volodymyr Zelensky’s office reported that during Monday’s meeting with the bipartisan delegation, the President of Ukraine thanked the US Congress for its solidarity with the Ukrainian people and informed senators about the security situation throughout Ukraine, as well as about steps in favor of de-escalation. . The President of Ukraine stressed that it is necessary to prepare a preventive package of sanctions against Russia in order to confront aggression.

Zelensky told US senators that Russia continues to issue passports to residents of the part of Donbass that is not under the control of the authorities in Kiev. According to him, Moscow wants to create a reason for escalation under the guise of “defense of Russian citizens.”

Also, on Monday in Kiev, a delegation from the US Congress met the head of the Ministry of the Interior, Denis Monastirsky. According to the minister, senators confirmed that the United States is ready to strengthen its support in the event of a deterioration of the situation in Ukraine. Monastirsky also said that not only the possibility of external aggression is being considered, but also the destabilization of the internal situation in Ukraine.

– The visit of senators to Kiev confirms that Ukraine has strong bipartisan support in the context of bringing Russian forces to the borders of the state and territories temporarily occupied by Russia – said the head of the Ministry of Foreign Affairs Dmytro Kuleba. On Tuesday, his ministry quoted the minister as confirming during a meeting with senators that “the strength of Ukraine is the best factor in stopping Russian aggression.”

According to the ministry, the two sides discussed the steps taken by Ukraine, the United States and its allies to prevent Russia from further aggression and to strengthen Ukraine’s defense capabilities.

Reuters reported that senators had promised the authorities in Kiev solidarity with Ukraine as well as arms shipments, while warning Russian President Vladimir Putin against launching a new military attack on the country.

“I think Vladimir Putin made the biggest mistake of his career, underestimating how brave the people of Ukraine would be to fight in the event of an attack,” Senator Richard Blumenthal told reporters in Kiev.

After the meeting with Zelensky, the representative of the Democratic Party spoke about the imposition of “disastrous economic sanctions against Russia.” “But most importantly, we will give the people of Ukraine the lethal weapons they need to defend their lives and the means of action,” he added. Blumenthal said the weapons could include Javelin anti-tank missiles, Stinger missiles, small arms and cutters.

Our message is: There will be consequences if (Putin – ed.) decides to desecrate this democracy – Senator Amy Klobuchar added for her part.

Don't Miss it Half of Polish companies plan to invest in climate-friendly activities within 3 years – Inwestycje.pl
Up Next The Polish Embassy responds to the Russian Foreign Ministry and quotes Winnie the Pooh