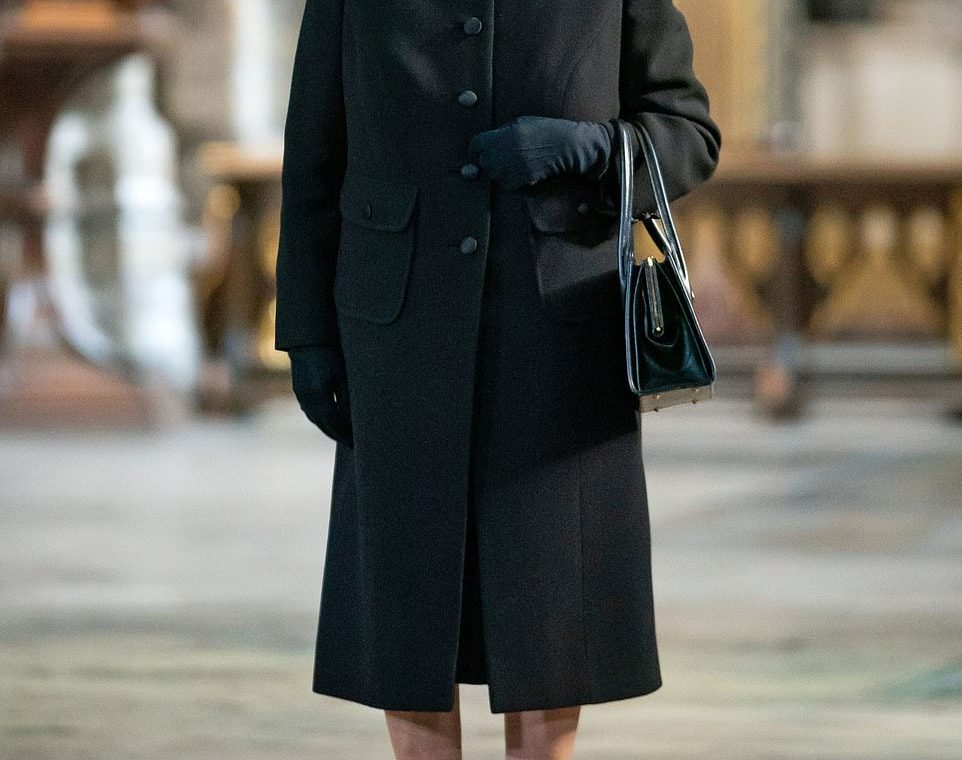 The Queen wore a face mask for the first time in public last week as she marked the centenary of the burial of the Unknown Warrior at a small private party in Westminster Abbey.

Her Majesty, 94, honored the British soldier, whose identity remains a mystery, and the royal family’s links to World War I at London Abbey before the Sunday commemoration.

The head of state, who wore all black with a bouquet of orchids and myrtle at the grave, was required to cover her face while performing the worship under government restrictions.

Reflecting the tradition of royal wedding bouquets placed on the grave, a tradition that began in 1923 when Lady Elizabeth Bowes-Lyon, Queen Elizabeth the future Queen Mother, placed her bouquet upon entering the convent in memory of her brother Fergus, who was killed in the Battle of Luce in 1915.

Since then, several royal brides have sent their bouquets to the grave in Westminster Abbey.

Before her death in 2002, the Queen Mother also requested that her funeral wreath be placed at the grave of the unknown warrior – a wish that was honored in the monastery the day after her funeral.

Greetings: The Queen commemorates the centenary of the burial of the unknown warrior, an unknown British soldier who died in World War I, in Westminster Abbey on Wednesday 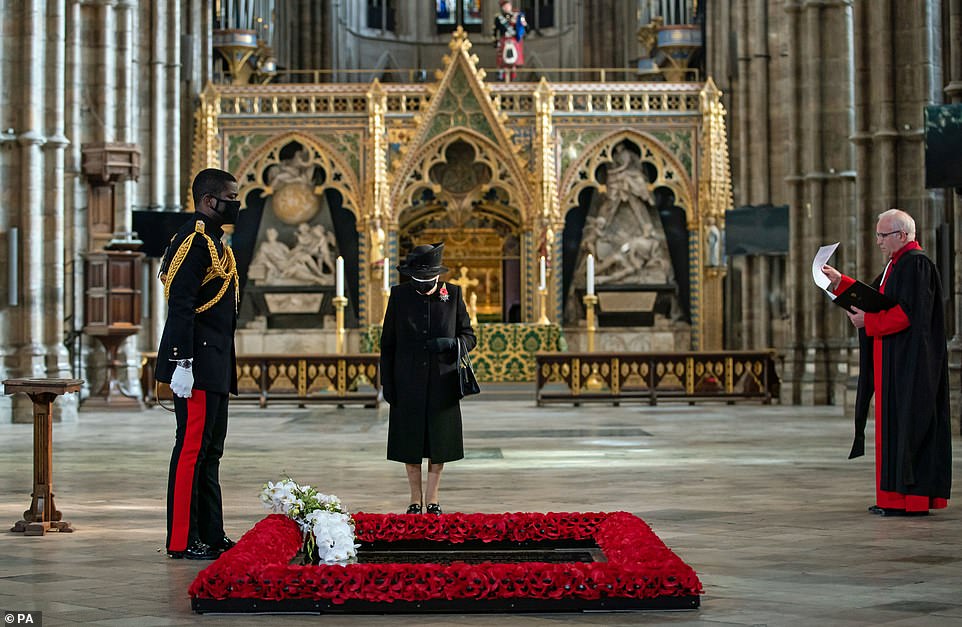 David Howell, Dean of Westminster Abbey (right), watches Queen Nana Kofi Tomasi-Ankara laying a bouquet of flowers on the grave of the unknown warrior in front of the Queen in Westminster Abbey. 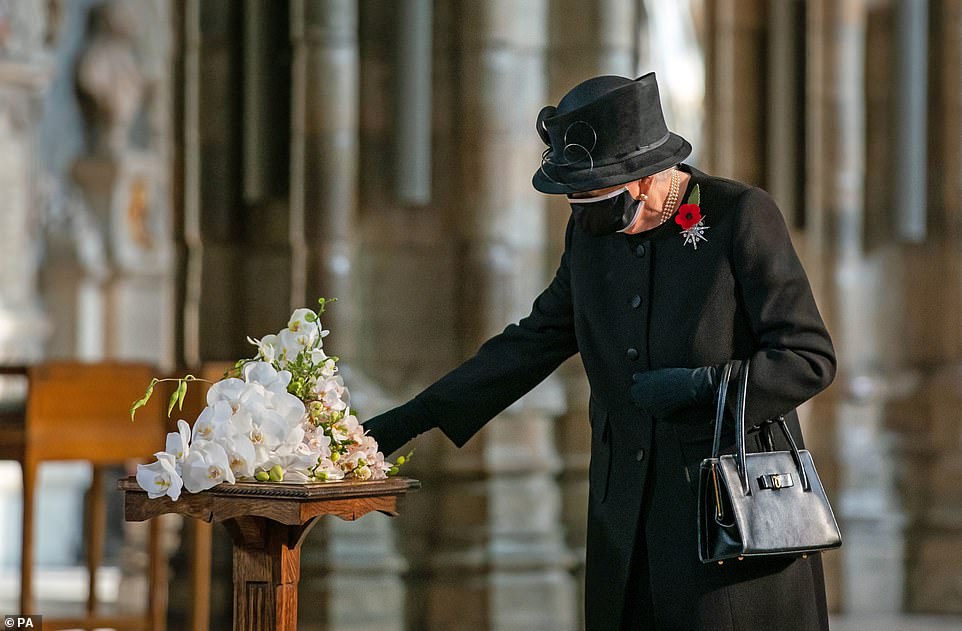 Commemoration: The Queen inspects a bouquet of flowers to put on the grave of unknown warrior Lieutenant Colonel Nana Kofi Tomasi-Ankara 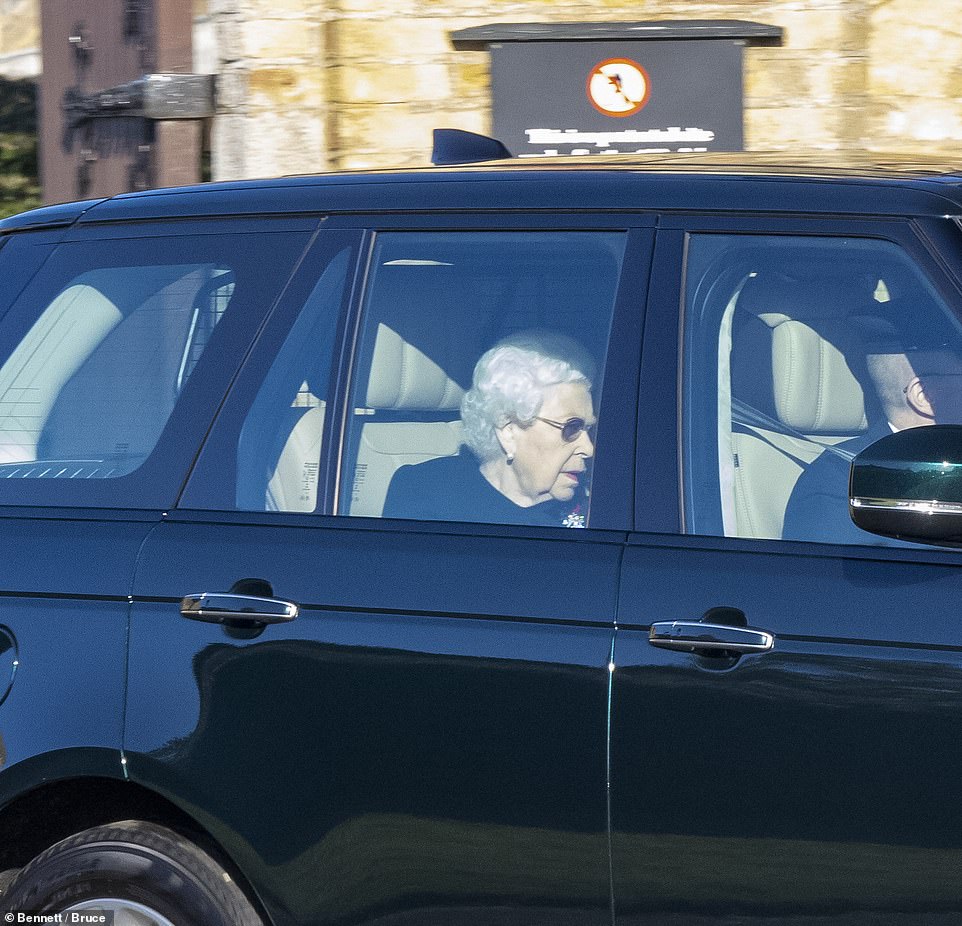 Condolence: The Queen, 94, traveled by car from Windsor Castle to London to celebrate the centenary of the burial of the unknown warrior, according to the court post. The Queen was photographed leaving Windsor Castle yesterday (pictured) before returning two hours later, but the reason for the excursion was not announced.

See also  Voula Island, the calendar there is different from the rest of the country 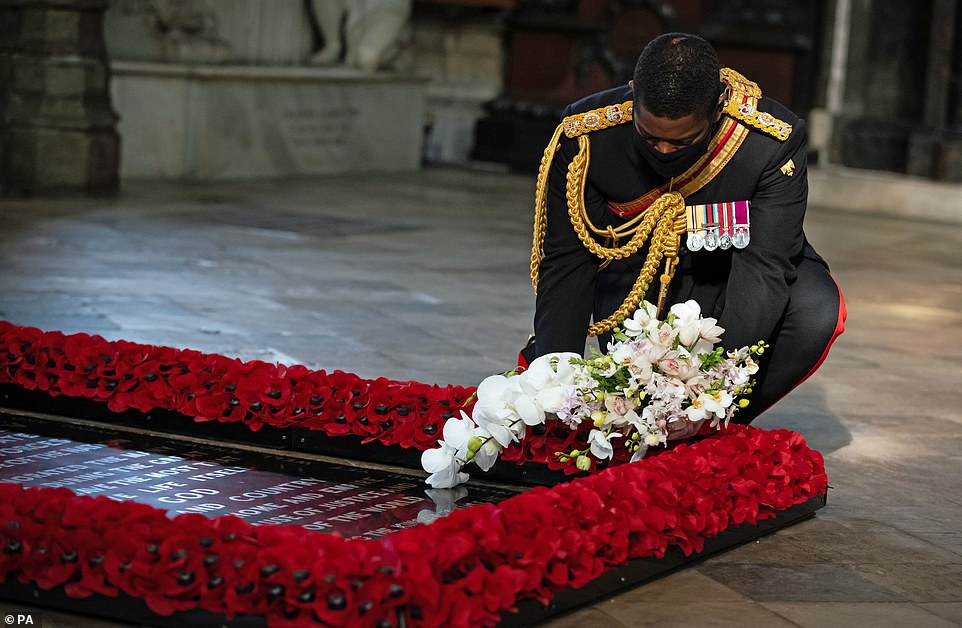 Honorable Mention: Lieutenant Colonel Nana Kofi Tomasi-Ankara laying a bouquet of flowers on the grave of the unknown warrior during a ceremony at Westminster Abbey 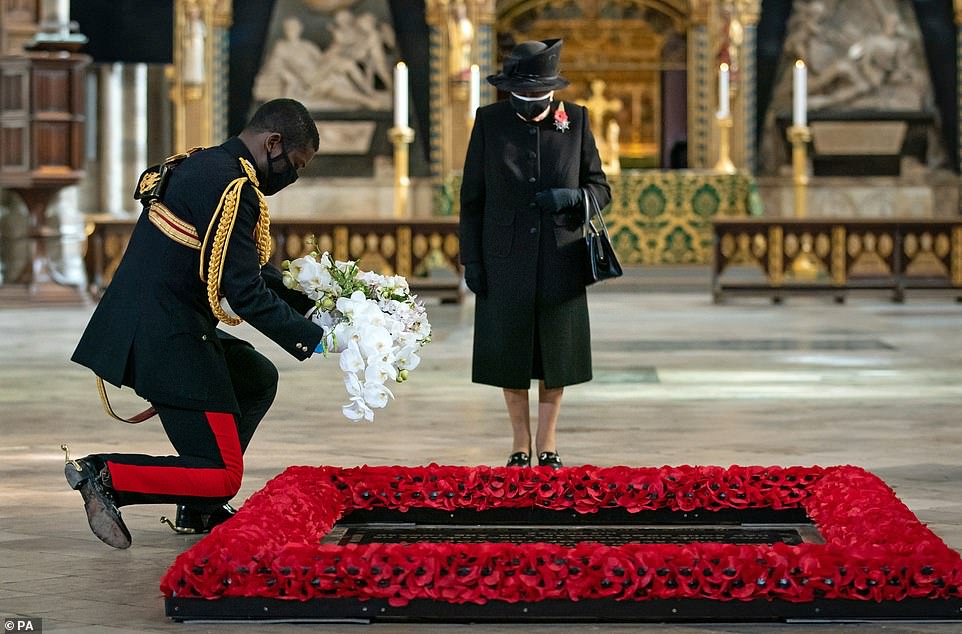 With respect: The Queen’s Mare, Lieutenant Colonel Nana Kofi Tomasi-Ankra, places a bouquet of flowers on the grave of the unknown warrior on behalf of the Queen during a ceremony in Westminster Abbey 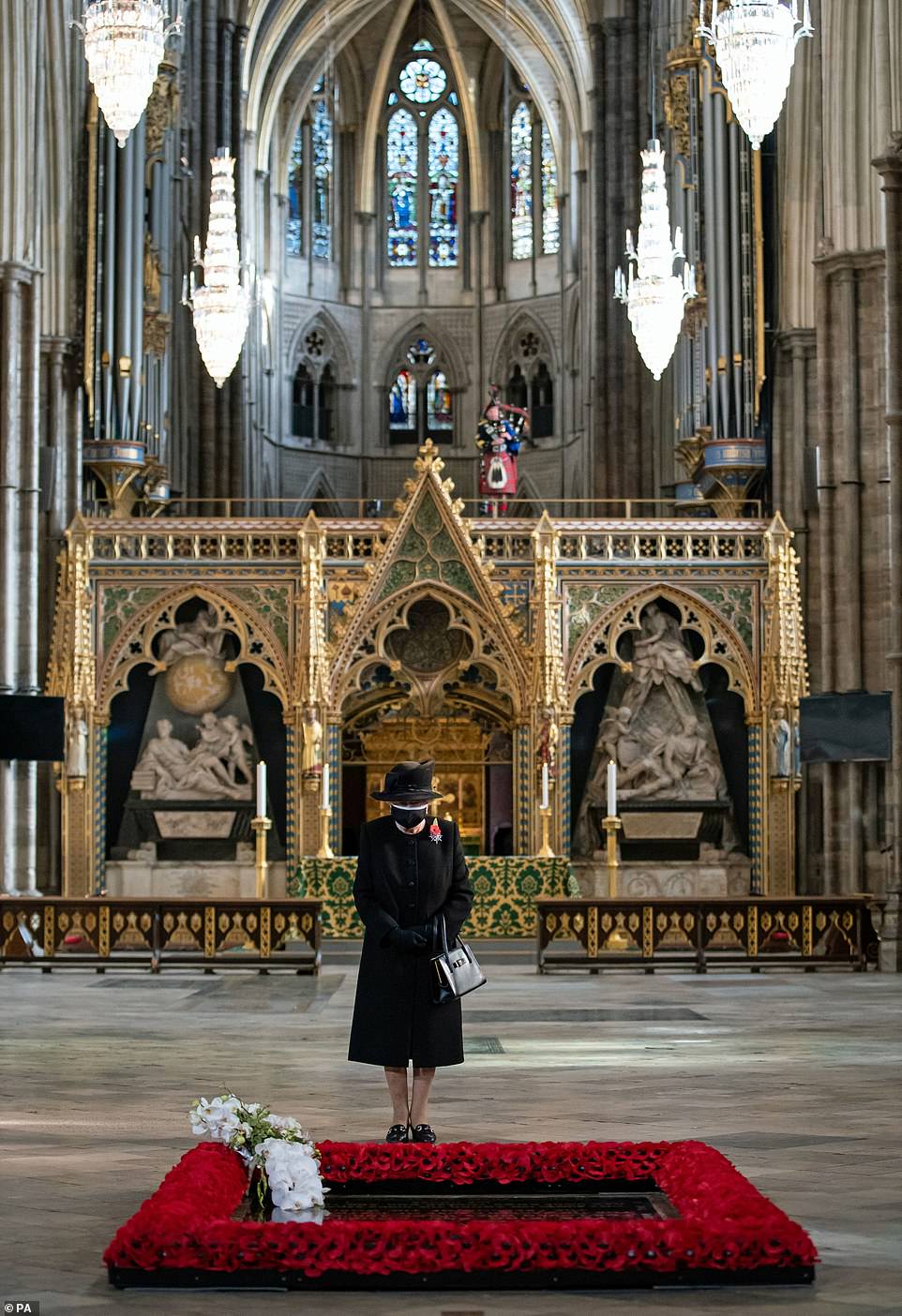 Greeting: The Queen inspects a bouquet of flowers placed on her behalf in the grave of an unknown warrior by her knights

What royal wedding bouquets were placed on the grave of the unknown warrior?

During the ceremony this week, Her Majesty the Queen also joined the Dean of Westminster in prayer and a moment of reflection after placing the bouquet on the grave, before Queen Piper plays a lament of the jungle flowers.

The Tomb of the Unknown Warrior is the last burial place of an unknown British soldier who died on the battlefields during World War I. The soldier’s body was brought from northern France and buried in Westminster Abbey on November 11, 1920 after a procession through Whitehall.

Later on, His Majesty threw a handful of dirt from France on the soldier’s coffin as it was lowered into the grave of the monastery.

He was joined at the burial by his son, the future King George VI.

The Queen was photographed leaving Windsor Castle on Wednesday before returning two hours later, as it is understood that she is now in isolation with her husband Prince Philip, 99.

She looked bluesy in a black ensemble, and is usually only worn during mourning, at a funeral, or on Memorial Day and Remembrance Day.

The court bulletin issued on November 4 states: “The Queen this morning celebrated the centenary of the burial of the unknown warrior in Westminster Abbey, London SW1, and was received by the Dean of Westminster (Reverend Dr. David Hoyle) at the Great West Gate.) 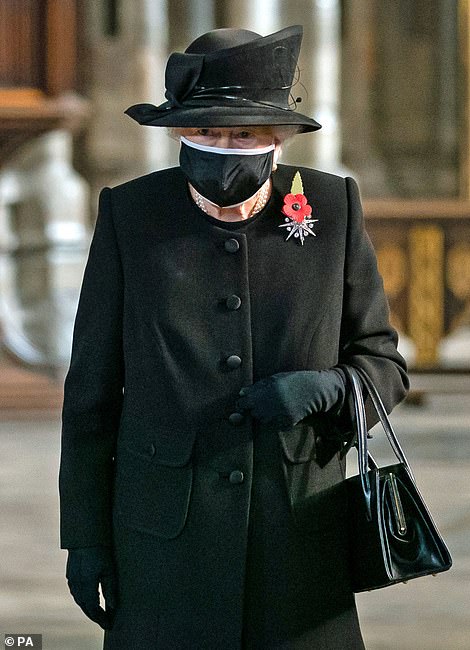 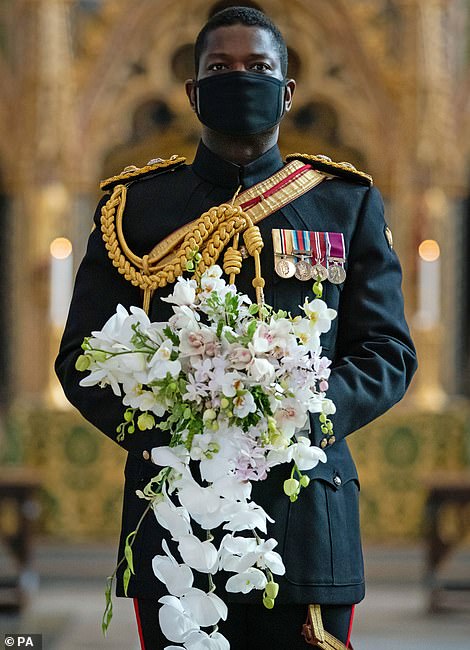 Tribute: The Queen pays tribute to an unknown warrior while her knight, Lieutenant Colonel Nana Kofi Tuomasi-Ankara, carries a bouquet of flowers to put on his grave 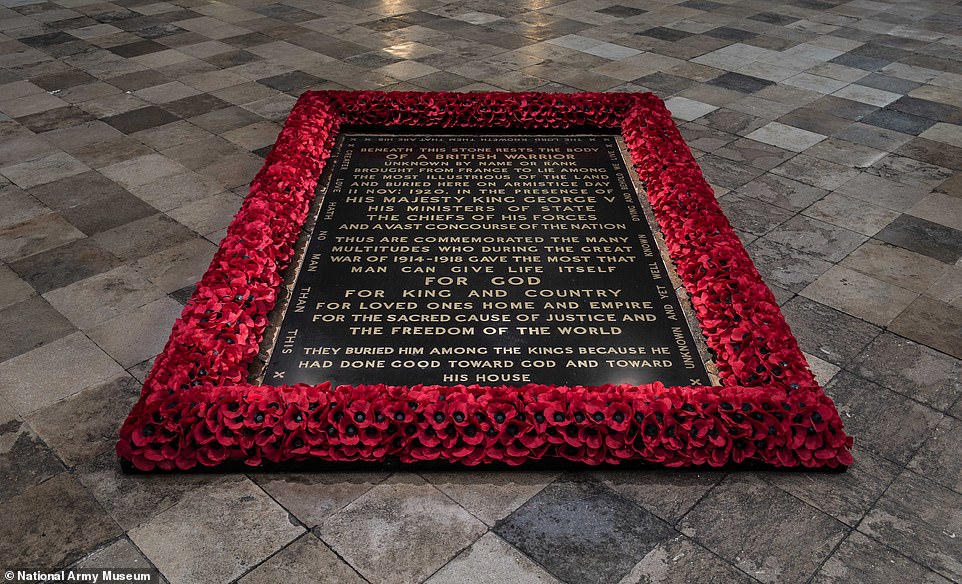 Greetings: The Unknown Soldier was buried in Westminster Abbey on November 11, 1920 but lockdown restrictions mean commemorations must take place in advance. File image 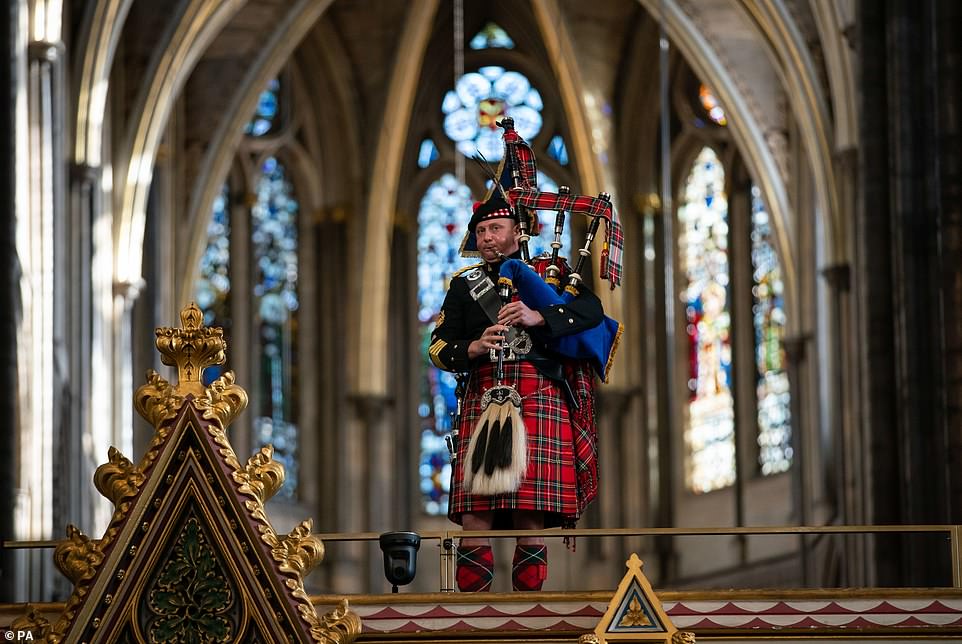 The Queen Piper plays at a party in Westminster Abbey, London, which the Queen attended last week 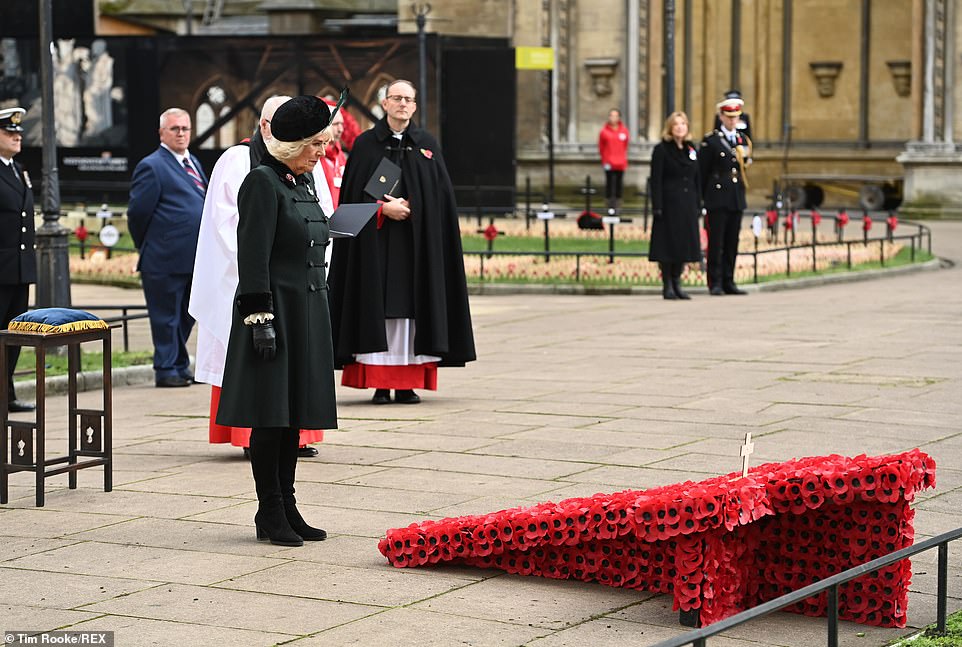 Royal ceremonies: The Duchess of Cornwall also had an engagement in Westminster Abbey yesterday, and stood in front of Prince Harry to visit Memorial Square 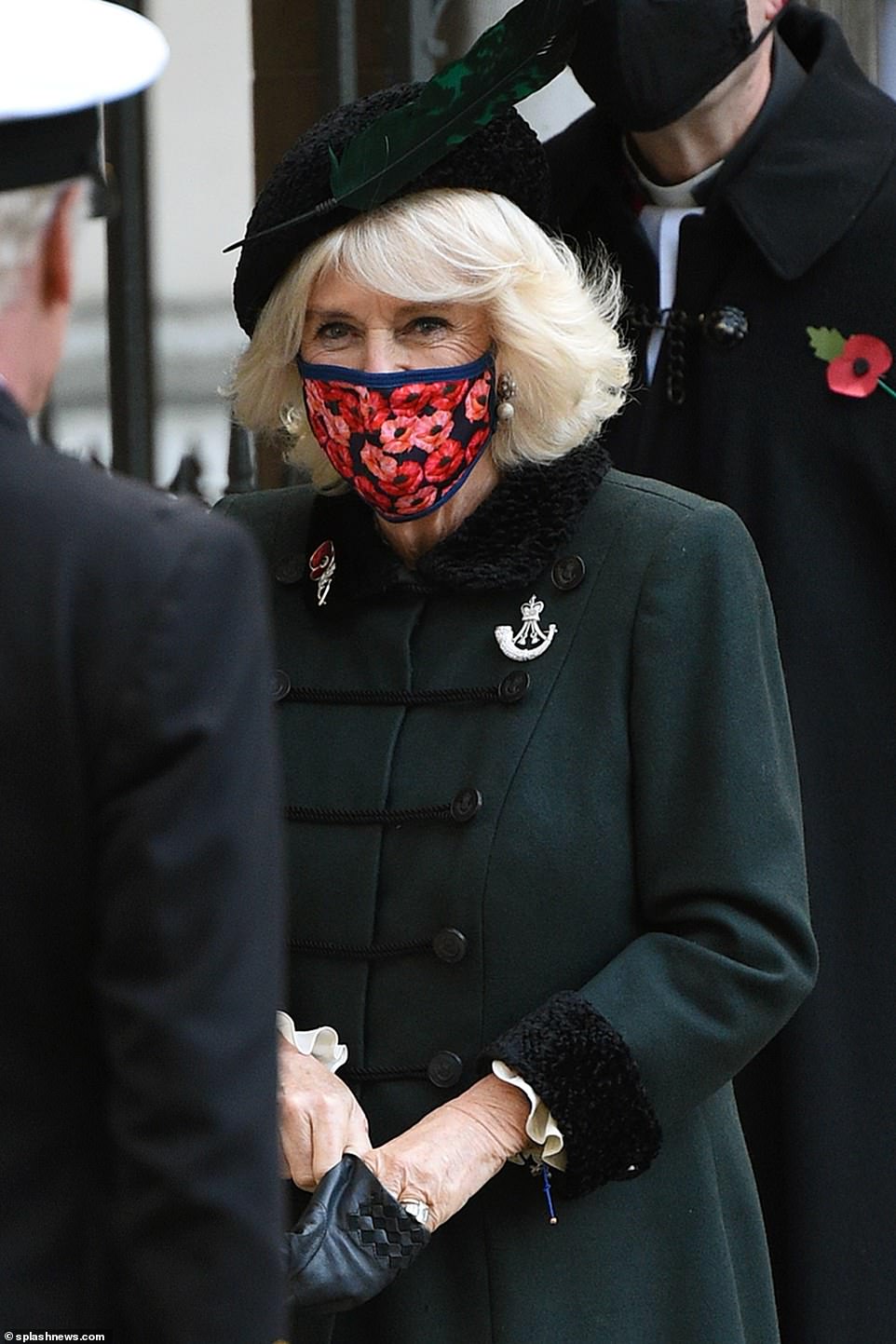 Camilla, 73, wearing a poppy face mask, pays homage to the soldiers and women who sacrificed their lives for their country and stood in solemn silence while the Last Post was played. 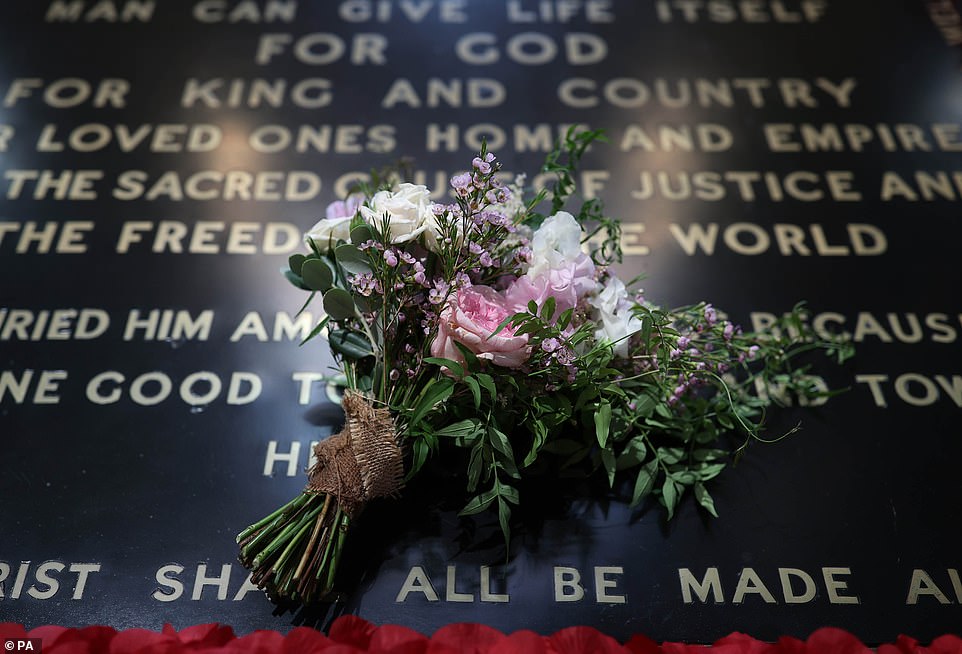 The Queen Mother completed this tradition for the first time when she married King George VI in 1923. Pictured is Princess Beatrice’s wedding bouquet at the grave earlier this year.

The Queen has made quite a few engagements since March, and is expected to stay out of the limelight over the next month as she and he are Duke of Edinburgh, 99, spend together at Windsor Castle.

The Duchess of Cornwall also had an engagement in Westminster Abbey yesterday, as she was standing in front of Prince Harry to visit Memorial Square.

Then she stood before the crosses from the graves of the unknown while the dean was praying, before formally placing her own cross of remembrance and bending her head in reflection.

Trumpeter on The Last Post, followed by two minutes of silence, then the memorial incitement, as Big Ben rang at 2 p.m.

Next, the Duchess toured 308 plots of land filled with more than 60,000 crosses and symbols of all faiths, laid down by staff and volunteers, with surgeon Admiral Lionel Jarvis, head of The Poppy Factory.

Sunday memorial services, which are traditionally part of collective worship, cannot continue as planned on November 8 due to lockdown restrictions

However, instead of banning it entirely, the government has put in place a series of guidelines for local authorities and religious leaders hoping to establish services.