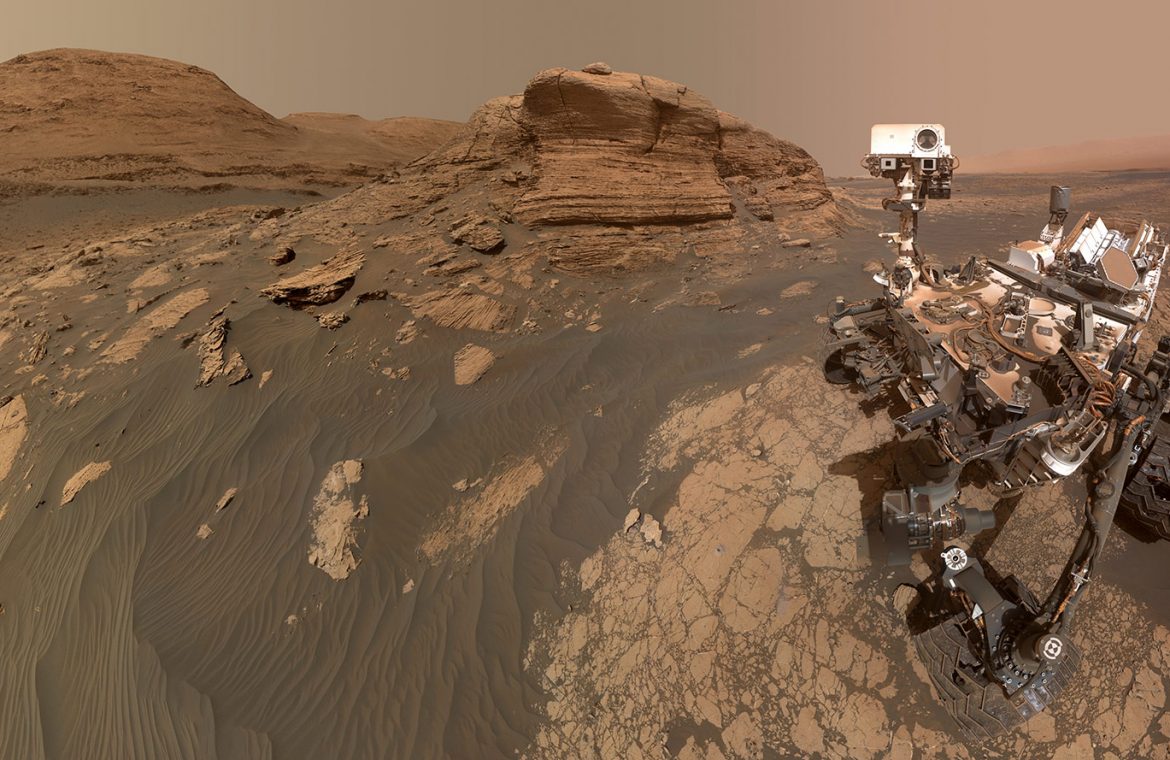 Website addresses were recently stolen by mobile cart DeterminationWhich It landed on Mars in February. Hardly anyone remembers it, but the Curiosity rover has also been around the Red Planet since 2012, which apparently doesn’t want to be forgotten. The car just sent us a giant 318-megapixel selfie.

Curiosity of He took nearly 800,000 photos while on the surface of Mars. The most recent photo is the result of combining 71 photos taken with two cameras.

Selfie of Mars with hidden surprise and greeting to the French.

The new image appears Curiosity of In front of “Monte Merko”, a rock is 6 meters high. NASA says the rover had to use two different cameras to create this selfie.

The panorama consists of 60 photos taken by the Mars Hand Lens Imager (MAHLI) camera on the robot arm on March 26, 2021, on the 3070 Mars (Mars days) mission from Curiosity. These images were combined with 11 photos taken by Mastcam, another Curiosity camera, taken on March 16 (3060 Mars missions). The combined image has a resolution of 318 megapixels. The image can be downloaded at NASA website.

When we take a closer look Image from MarsOn the left of the rover, you can see a small hole in the ground. Curiosity dug a well there to take a sample. As reported by NASA, this particular specimen has the name “Nontron”. Maybe the name says something to some of you. Nontron is a town and municipality in the New Aquitaine region of France, in the southwestern part of France. NASA is using names from these parts of France to identify samples from the Martian region where the Curiosity spacecraft is currently operating.

This is not the first time Selfie of Mars from Curiosity

Curiosity uploads amazing photos from the planet Mars For many years now. One can recall a beautiful panorama with the rover in the center, taken in 2013. The image shows the roof below, as well as the dusty sky. The photo was taken in Yellowknife Bay in the Gale Crater region on Mars.

A year later, Curiosity was delighted with other selfies taken from a slightly closer perspective.

a year ago Curiosity took a selfie from Greenheugh Pediment. In the photo, right in front of the rover, you can also see the hole drilled by this device while taking a soil sample for testing. The entire portrait photo is a 360-degree panorama, combined into 86 photos that were sent to Earth. The picture shows Curiosity of Stand 3.4 meters below the point where the rover ascended to the summit.

The pictures are great, but let’s remember that the rover was equipped with pretty old equipment from today’s perspective. The spacecraft landed on Mars 9 years ago, but work on its design began many years earlier. So it is, in part, a technology from the beginning of the 21st century.

Curiosity has several digital cameras, and you can find a description of them at NASA website.

One of the Curiosity rover’s two main cameras, the Mastcam 100, has a CCD matrix with a Bayer filter with a resolution of 1600 x 1200 pixels, which works with an autofocus lens with a focal length of 100mm and an f / 10 aperture.

MAHLI, the second camera with which the most recent selfie was captured, also has a CCD sensor with a resolution of 1600 x 1200 pixels, but it was primarily intended for capturing macro images of the geological elements studied by the probe. The camera is located in the front arm of the Curiosity, thanks to which it is also suitable for capturing diagnostic photos of the rover itself and … anniversary selfies.

MAHLI has an intensity of 22.5mm and can work at night, as it is equipped with 6 LEDs, of which two emit ultraviolet light.

Read also: “My Xiaomi device takes better pictures than the billion dollar Martian rover photos.” What cameras and processors does Perseverance have?

I wonder what these photos would look like if Curiosity had cameras that offer quality, for example, in leading modern cameras, like Sony A1 rain DSC R5. Instead, it would not be possible to implant these arrays or entire devices directly, as they are not adapted to the conditions prevailing outside the Earth. Instead, I mean the image quality we would expect if the Mars rover were to use the very latest imaging technology available to humans.