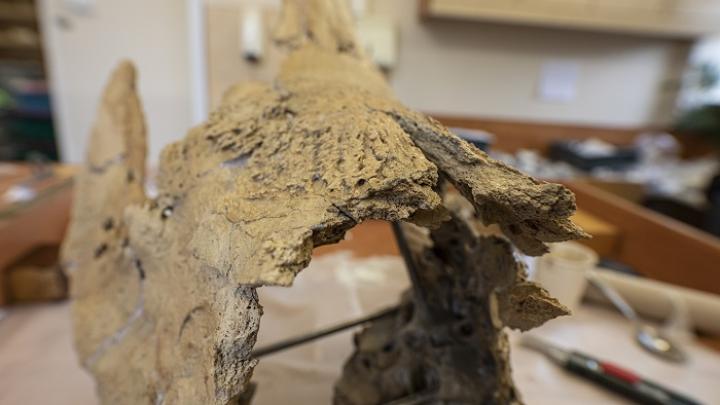 Staff of the Department of Paleobiology at the University of Wroclaw have reconstructed the skeleton of a fossil rhinoceros called Stefania. For now, their focus is on putting the skull back together again. “We are in the final stages of getting the rhinoceros back on its feet,” they say.

The website of the University of Wroclaw reported on the last stage of the reconstruction.

“We are in the final stage of getting the rhino to get back on its feet again. After a long and arduous process, all the bones have finally been cleaned, prepared and preserved. There were bones preserved in perfect condition, and there are also very delicate items, such as the skull. Now we are trying to reconstruct the skull.” We invited an artist and a sculptor to collaborate with us, who will help us combine these elements together. The skull was very deformed, crushed “- says the participant in these works veterinarian Adam Kotovsky.

“Currently, in Poland, we are dealing with the remains of many species of these animals” – says the professor. Krzysztof Stefaniak, Head of the Department of Paleobiology at the Faculty of Biological Sciences, University of Wroclaw. The reconstruction is an element of the broader work – in the Department of Paleobiology, a research project is being carried out on many aspects of the life of the fossil rhinoceros, which relates to a specimen called Stefania. Scientists have discovered almost all of its remains near Gorzów Wielkopolski.

See also  Learn drawing from scratch - how to get started? Tips and rules for beginners

“At the moment, we are focused on assembling the rhino skull. Previously, it was believed that this species of rhinoceros feeds mainly on grass. And it turns out that our Stefania also feeds on shoots – so she lived in the forests. Another species, the woolly rhino, that feeds on leaves, for example. As a result of climate change, Stefania became extinct about 40,000 years ago, and the woolly rhino about 10,000 years ago. We cannot say whether it was only climate change or human activity that contributed to the extinction. Today we cannot allow With this happening. The few species of rhinoceros still remaining in the world will become extinct. We must save them “- says the professor. Stefaniak.

Don't Miss it Alan Wake Remastered in the first match. Adventurous gameplay shows in 4K resolution
Up Next No plan to drop out of education due to COVID-19, says Koca