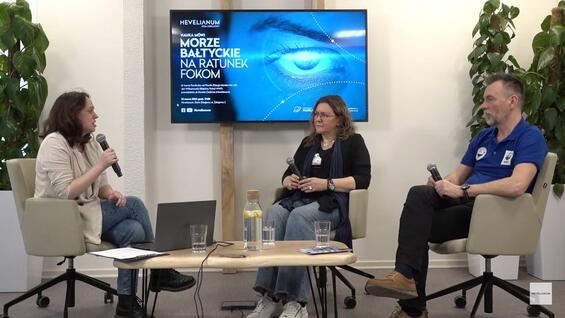 How do seals help? What is the future of these mammals in the Baltic Sea? Hevelianum on March 22 at 17:00 invites you to Dom Zdrojowy in Brzeźno for the next meeting in the series “Science Says”: the Baltic Sea. To save seals.

Science Talks is a monthly series of conversations about the impact of science on the reality around us, about the opportunities and possibilities that lie in its development and about socially important issues. The course started in September 2020.

At the second meeting in 2022 – on March 22 – the topic of conversation was SEALs: the Baltic Sea. To save seals.

Dr. Iona Paulicka Phil Paulic PhD in Earth Sciences in the field of oceanography. From 2016 the Director of the Naval Station A. Krzysztof Skora of the Institute of Oceanography at the University of Gdask in Hel. The main topic of her scientific and educational work is the biology and ecology of marine mammals in the Baltic. Author and co-author of numerous reports, expert opinions and scientific publications in the field, with a particular focus on the aspect of mammal protection in the Baltic Sea. Participant in research missions related to the estimation of the number and distribution of porpoises in the Baltic, North Sea and Danish Straits. Actively participates in the work of consulting and expert groups, incl. ASCOBANS (Agreements for the Conservation of Small Cetaceans in the Baltic Sea (…) and the North Sea), Baltic Seal Working Groups of the Helsinki Commission (HELCOM), Specialized Groups of the International Council for the Exploration of the Sea (ICES)). He conducts academic educational classes and substantively supervises the marine education project for schoolchildren called The Blue School at the UG Naval Station was implemented in cooperation with the Gdask University Development Foundation. He is a board member of the European MARS Network of Marine Research Stations.

See also  The augmented reality mural series is a tribute to women, space and science

Jan Wilkanovsky – Instructor, tour guide by profession, associated with the WWF Blue Patrol since 2009, initially as a volunteer, and since 2013 as a local leader of the WWF Blue Patrol in the Piaski – Mikoszewo division. Working for the WWF Blue Patrol led to professional changes (physical education teacher became a biology teacher) and the writing of a book that was independently published in 2020 – “Blue Tales” about the animals and plants of Baltic nature and the people involved in their protection. Hobbies: Sports, Photography, Music, Tourism, Sightseeing.

in the leadership role Dr.. Dorota Chileka – Ph.D. in Biological Sciences, defended her degree in the Department of Plant Taxonomy and Nature Conservation at the University of Gdask. At Hevelianum, as the chief specialist in scientific matters, he is responsible for activities related to education and scientific communication. She is fascinated by ideas and motivated by new challenges. A supporter of simple solutions.

Don't Miss it It is already happening. Roberto Soldeo is coming. hack information
Up Next Navalny activists: the yacht moored on the beaches of Carrara is owned by Putin