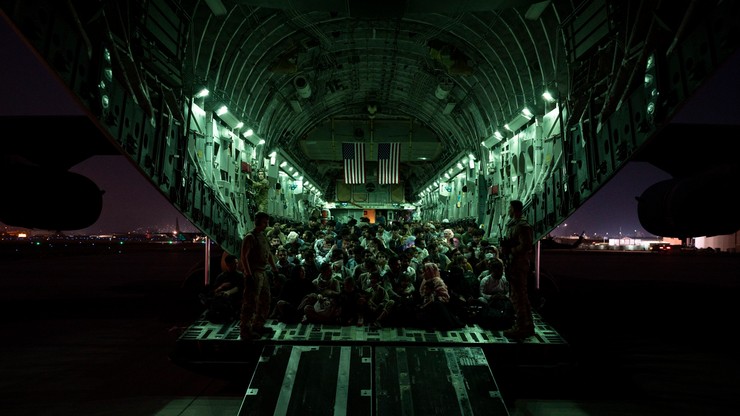 In front of the Kabul airport gate, crowds of Afghans are still gathering, wanting to get out of the Taliban-controlled country. Access has been blocked within a few kilometers of the airport, in front of which thousands of refugees are camped, according to the BBC.

The atmosphere is very tense, Afghan forces guarding order are chasing journalists, sometimes you hear gunshots – according to the British station. He adds that among the thousands of people trying to make their way to the airport, there are often former Afghan collaborators with Western governments and institutions. Not all of them are on the evacuation lists of Western countries and have documents that allow them to travel.

According to CNN, about 6,500 people waited for evacuation at the airport on Tuesday morning. Persons. The station said that since all access roads to the airport are under Taliban control, Western citizens and Afghan associates are being handed over in organized groups agreed with the Taliban. He adds that people admitted by the Afghan security forces stationed there by the pro-Western government that was toppled by the Taliban, also arrived at the airport.

Some countries, including the United Kingdom and Spain, have announced that by August 31 – the scheduled date for the withdrawal of US forces from Afghanistan – they will not be able to safely deport all Afghans who must be evacuated.

See also  This is just a giant cable. Google linked the US to Europe

The United States is under pressure from Western allies to extend its military presence at the airport beyond August 31. This was one of the points of discussion during the G7 leaders’ meeting on Afghanistan on Tuesday. According to Reuters, the final decision will be made by US President Joe Biden, and should be made on Tuesday. And the Taliban announced that the postponement of the withdrawal of US forces would be a breach of previous arrangements and would face consequences for its part.

“The US president has not mentioned any new dates today after the known date of August 31,” Merkel said in Berlin.

She added that intense discussions were underway about the possibility of using a civilian airport after this date and that Germany was ready to work with Afghanistan’s neighbors, such as Pakistan and Iran, to help the refugees.

6 thousand American soldiers are secured at the airport

Except for about 6 thousand. The forces of the American unit at the airport, the forces of the Western countries that are there will not be able to control the airport and continue the evacuation. Currently, more than a thousand British soldiers are stationed at Kabul airport and smaller military groups, including from Turkey, France, Germany and Poland.

In the past 10 days, 58.7 thousand people were transferred from Kabul Airport. People – Reuters reported on Tuesday, citing sources in NATO. The White House announced Tuesday that coalition forces have evacuated 21,600 people since Monday morning. Persons.

See also  The accounts of the US President have been banned. This heralds a dangerous direction - the region

Don't Miss it Extinction Rebellion against the City of London. first round
Up Next Japan: First Yakuza leader to be executed