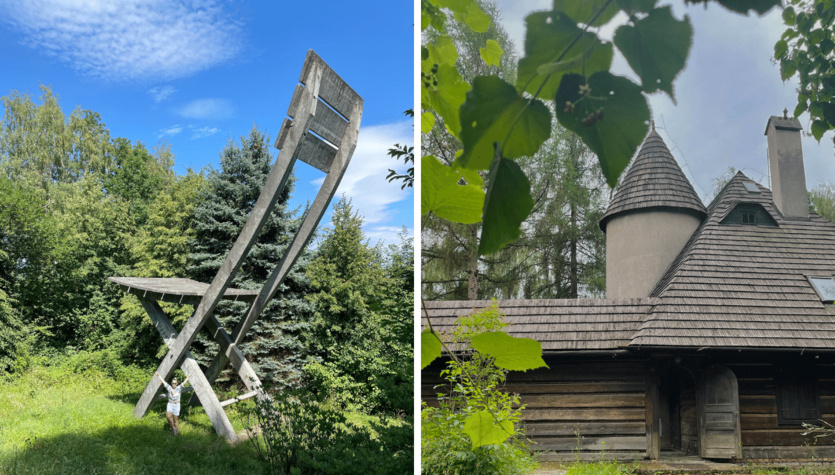 In the middle of the forest, on a small hill, less than an hour’s drive from Krakow, past Wieliczka towards Gdów, we will see a small sign with the inscription: “T. Kantor Hucisko’s chair”. Literally in the middle of nowhere, next to the artist’s only architectural project – the house in which he and his wife Maria Stangrite Kantor lived and worked, there is a 14-meter concrete chair. How did you come to that?


In one of the villages of Malopolska, in the middle of a forest, we find a unique little-known tourist attraction
/Agnieszka Maciaszek /private archive

Although Kantor’s gesture to elevate vulgar things to the rank of art one can find a continuation of the activities of the avant-garde in the early century, he – unlike the Dadaists – did not make the object a work in itself, but rather used it as a separate work item. Umbrellas became fragments of collages and gatherings, while chairs became elements organizing the space. Chairs, either by stacking them or by scaling them to a gigantic scale, are no longer a boring piece of furniture, and have acquired a kind of subjectivity. They imposed certain movements, reactions and behaviors on people and in their surroundings (as was the case, for example, in the play “The Madman and the Nun”).

The idea of ​​the impossible monument first came to Cantor’s mind in the early 1960s and 1970s. During the seminar held in Villa Luca, the artist performed “The Chair-Emballage”. This drumming can still be seen in the Croatian town’s cultural center and was just a prelude to more activities. In 1970 Kantor submitted the first “impossible architecture” project to the “Wrocław 70” Art Symposium. The organizers asked to prepare things that could become part of the city space. The artist proposed a massive chair, a not too massive monument based on a model of the simplest folding chair. It was an ordinary and unremarkable everyday thing to become an integral part of the city centre.

This artistic situation was not in him (the chair), it was not in the form, but in its surroundings. That is, by the presence of this object, the entire environment has become artistic

These justifications were useless. The authorities viewed the project as a mockery of the system and the way socialist monuments were erected throughout Poland. Thus, in Wroclaw, a concrete outdoor sculpture, created according to a design based on the artist’s original drawing from 1970, was not erected on Rzeznicza Street until 2011.

Interestingly, the idea of ​​the massive chair was so intriguing that a revised version of this design was successfully implemented in 1971 in Høvikodden near Oslo. The argument was the opening of the Tadeusz Kantor Gallery in this place. A huge wooden statue stands on a hill next to the Henie-Onstad Kunstenter Center for the Arts. However, due to weather conditions, the work did not survive the test of time and after one of the storms broke the support, the author himself decided to dismantle the damaged statue.

However, according to the master’s idea, placing a giant chair in a public place did not change the behavior of passers-by so much as it changed the character of the place, transforming it from a street or square space into an art space. In this way, simple equipment ceased to be a piece of furniture and began to perform functions close to architecture. It became what Cantor called “impossible architecture”.

The only completed architectural project of Tadeusz Kantor – a house that was to become a museum dedicated to the work of him and his wife Maria Stangret-Kantor was built in Hucisko (Gdów municipality). The artist purchased the plot of land from Baron Lipowski and took an active part in the construction, overseeing the progress of the work. A concept that evokes the huts of Zakopane and a wooden mansion with a distinctive white-brick tower, executed rigorously under Cantor’s supervision, was completed in the early 1980s.

Wood was brought from the mountains, there were carpenters on the spot, all the furniture and accessories were selected very carefully. – Wooden summer villa in Lesser Poland Hucisko, led by dirt roads from Wieliczka, from the outside probably resembles a traditional Zakopane hut, were it not for some architectural styles that would disrupt the details: a semicircular tower that rises above the high ceiling resembles a medieval castle tower, just like Like white stone foundation and tall chimney. There are more surprises. As with Cantor. Because this house is a story about him and his theater – Piotr Stępień, the Krakow architect who helped Tadeusz Kantor to implement the project, said in an interview with Culture.pl.

Today, the house can only be visited by appointment, and if you decide to go there automatically, the gate will be closed by four triggers. Cantor’s home is not easy to find, despite the signs. A narrow, sweaty path in the middle of the woods may trick you. On rainy days, leave your car on the main road and walk. You can see the house and yard through the gate. Those who are lucky enough to arrange a specific day and time will see the drawing studios, living room and kitchen on the ground floor. There is a bedroom on the first floor. The whole house is like the scene in question – leaving one room, we unexpectedly find ourselves in unexpected places, for example in the middle of the stairs. Everything has a fun and unique atmosphere of an art space. There are paintings, archive photos and drawings on the walls. There are also personal belongings of the artists. The museum potential of this place is huge.

Tadeusz Kantor died suddenly on December 8, 1990 in Krakow. In 1994, his wife created the Tadeusz Kantor Foundation. Discussions about the artist’s monument continued. Initially, it was supposed to be a statue presenting Cantor as a pilgrim. Among other things, due to the costs, the level of complexity of the project, as well as voices that raise the fact that the monument in the case of this artist would be “retrospective and totally inappropriate”, did not happen. At that time it was decided to implement the project of the series “Impossible Monuments” next to the country mansion in Hucisko, which at that time was still in the field of ideas. Thus, next to the house, a huge 14-meter cement chair was placed.

When it was built, it was visible from afar, and today it also towers over the manor house, although it is hidden from the surrounding trees. His sight, according to the master’s idea and intent, is surprising as something completely unexpected. For Cantor he was a master of a vulgar subject. The trivial, common, available things are owned by the rich and the poor. On the one hand, things are so trite that we do not even notice their presence, and on the other hand, so basic that without them it would be difficult to imagine normal functioning. Chair – Sometimes comfortable, signed with the artist’s name, but often not quite finished, limp, uncomfortable, and repainted. The simplest piece of furniture, even in the cheapest hotels, the most hated apartments for rent, even in prison cells. A piece of furniture without which an interior would seem uninhabitable.

It is worth going to small Hucisko to see this unique monument with your own eyes and for a moment feel the spirit of the maker of Cricot 2 theater. It is a pity that a place with such potential can remain without any regular upgrade or care.

Vacation, it’s vacation again! Poles are moving in crowds for their long-awaited rest, we want to accompany them and give good advice to be seen in our beautiful country. Maybe great attractions are too close? You praise others, and you do not know yourself – the poet wrote. And we want to show that it really is. So we will look at Sosnowiec, Radom and Fabrzych, we will check the “Polish Maldives” and many other inconspicuous places. Stay with us all summer!

swoopsk. The city of the witch and the bear
They burn huge fires called al-Huda. Mysterious rituals of the inhabitants of the Ugsol Highlands

Don't Miss it Alicia Rusulska stepped into the action. This is her 15th appearance at Wimbledon
Up Next Espargaro is exhausted from the need to fight for the championship