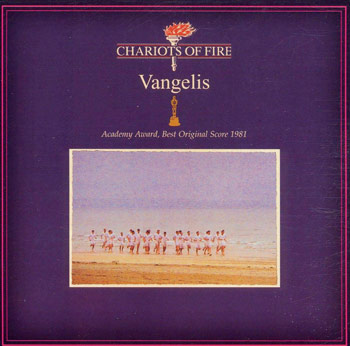 40 years ago, the Oscar-winning album Chariots Of Fire was released. Last Monday, her composer turned 78 years old. His name is Evángelos Odysséas Papathanassíou, and he is known all over the world as Vangelis.

In 1976, thanks to Polish Radio 3, I was introduced to the album Heaven and Hell, which was released in December 1975. This was my first encounter with Vangelis’ wonderful music. However, it was the later albums – Spiral, Opera Sauvage, China, or just Chariots Of Fire – that got much closer to me.
However, to this point. In poor PRL’s distant times, it was easier to hear a soundtrack than to watch the movie the soundtrack was taken from. This also applies to Chariots of Fire, although it was known that Vangelis, who already had a good reputation as a well-known composer, wrote the music for an important and valuable film.
Here, as a reminder, a few words about Hugh Hudgson’s Oscar-winning movie. In the description of the DVD distributor you can read: 1924 – the year of the Olympic Games. Britain’s greatest athletes begin their path to fame. Their success will be the glory of the entire nation, but for the best runners, Eric Liddell and Harold Abrahams, it will be a personal, challenging, and awesome game. It should be noted that the story of the film was based on real events and related to two young athletes: Liddell – a pious Scottish who comes from a family of Presbyterian missionaries, and Abrahams – an ambitious English Jew, who studies in Cambridge and persistently seeks the approval of his colleagues. Both are competing in the 100 meters at the Olympics in Paris. The first of them runs “to the glory of Jesus”, and the second – to gain fame.
The film’s director, Hugh Hudgson, admired the Opera Sauvage and China albums, and convinced Vangelis to compose the music. In an interview with American Film in 1982, the composer said: I didn’t want to make old music. I tried to compose contemporary music still in time with the movie. But I also didn’t want to choose a completely electronic audio.
However, it must be emphasized that the music that filled the album was almost completely re-recorded and seemed to be slightly different from that used in the movie. It mainly contains richer arrangements, and is particularly audible in the main theme, that is, in the opening track titles. By the way, this configuration, also known as fire chariots, was a huge success in the world, and reached the top of the charts in many countries, including the United Kingdom, the United States and Japan.

The following combination, Five Circles, is no less beautiful than the titles. It’s also hard to deny the magic of the rest, which was on the front page of the long show, namely: Abraham’s Theme, Eric’s Theme, 100 Meters and the only one not composed by Vangelis – Jerusalem, by Hubert Berry, written to the lyrics of William Blake and performed by a choir of Ambrosian singers.
The second aspect of the vinyl release was littered with only one composition – the title set, Chariots of Fire, which is an effective mix of several first-page themes, including, of course, the titles.
Some of the original themes used in the film did not appear on the CD soundtrack, among them Hymn’s song from Opéra sauvage, the basis of the sequence in which Eric Liddell works in the Scottish Mountains.
In fact, there is no reason to be surprised, because in Fanglis’ words: The album is something other than the movie. It should contain changes – not just for technical reasons.
It should be noted that Vangelis dedicated the result of his work to his father Ulysses Papathanassiou, who was, like the characters in the film, a runner.

Chariots Of Fire was at the top of the Billboard Bestsellers list for four weeks. In a similar ranking in Canada it ranked second, and in Great Britain and Australia it ranked fifth. In Austria, France and Hong Kong. In the United States, Great Britain and Spain, it moved to platinum, while in Canada it took the triple platinum position.
No other album of the artist has such achievements. Another question, is it the best work of a composer? Moot point. What’s more, when you take into account the opinion of Vangelis himself: it is extremely rare for a composer to consider his most famous piece to be the best. I am no exception to this rule. I find my soundtrack for Mutiny on the Bounty much more interesting than fire buggies.

Don't Miss it Combination therapy is effective in Marburg virus infection
Up Next Seafarers’ Taxes: A New Tax Deal With The United States In 2021?