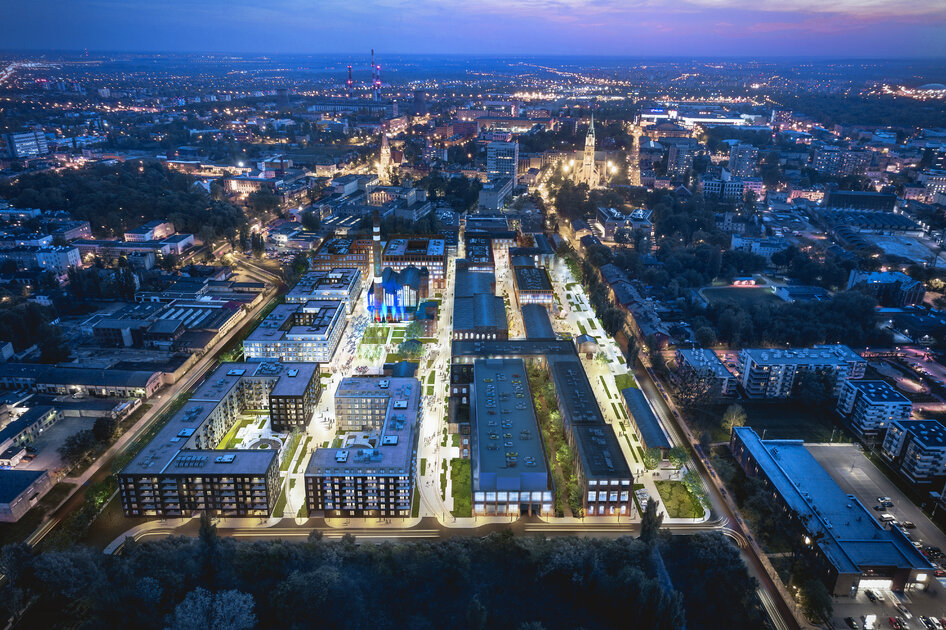 Echo Investment, a developer operating in the post-industrial areas of ód The Fazjah project has signed an agreement with the city authorities according to which a new road will be built alongside the investment. Tymienieckiego Street will connect to Milionowa Street, and will be completed in 2022. Fuzja is located in the heart of the city, nearly eight hectares of land and historic buildings after Carol Schipler’s former textile empire. The revitalization of this place would allow Lodz to reclaim a large quarter of the city and give new jobs to the post-industrial space. In Fuzja you will be able to live comfortably, work effectively and spend your free time with pleasure.

The new road, to be built on the eastern side of Fozja, will connect Milionowa Street with Tymienieckiego Street in the section between Piotrkowska Street and Kilińskiego. It will have a positive effect on traffic regulation and this area of ​​the city will reduce the traffic volume. Echo Investment will allocate about 4 million PLN to the investment.

Fozja is a joint venture city setting that will combine residential, office and leisure functions in addition to excellent public spaces. We will preserve the identity of Lodz and connect history with the future. The merger will unite at different levels and in different aspects, also from a practical point of view, resulting in a new road concept linking the streets in the investment area. The new road will improve traffic in the vicinity of the complex as well as integrate with the city – Says Anna Malarcic-Arcidikono, Project Manager Fozja. – The gradual integration becomes an integral part of ód, so we implement the road infrastructure around the project so that it serves all the residents of the city to the maximum extent possible.. We can confidently speak of the complete success of the merger between local government and businesses, for the benefit of the local community – Adds Anna Malarkczyk-Arcidikono.

The new road will consist of two lanes with wide pavements on both sides, which will give a total of 14 meters of the width of the entire roadway. The new street concept connecting Tymienieckiego and Milionowa is the result of a broad perspective and vision of the entire complex, whereby not only the developer’s land is taken into consideration, but also the surrounding surrounding areas for the investment. The merger will be naturally linked to the city, open and consistent with the nearby urban development, which will translate into an ideal coexistence of investment with the surrounding area.

Investors are increasingly aware of their true impact on creating urban space. We are pleased that one of the largest developers operating in Poland has assumed joint responsibility for the infrastructure of Lodz. Echo Investment is revitalizing the post-industrial area of ​​Carol Schipler’s former empire, which will soon be handed over to the city and its residents. The new street will be a very important component of the whole project, which will improve communication in this area – Says Adam Postelnick, deputy mayor of Lodz.

The merger by Echo Investment will revive the post-industrial areas of the former Karol Scheibler plant in ód. On nearly 8 hectares in the Mujahideen. Tymienieckiego Street, the revived historic buildings will regain their splendor and, thanks to their new functions, will fill with people again. There will also be other facilities that will complement the existing urban fabric with new places to live, work and meet.

In the end, the entire project will consist of four residential buildings, offices, service spaces, shops and restaurants in historic buildings, in addition to a perfectly designed public space of about 4 hectares, with squares, green spaces, and urban infrastructure. Fujitsu Corporation is the principal tenant of the first two office buildings. In June of next year, the square will be put into operation at the power plant, which will create a new and unique space for meetings and social activities. All this will make Fuzja a unique place on the map of Lodz, and attractive to employees, residents and tourists.

Don't Miss it Biznes alert: German report warns of potential disaster and radioactive cloud from Poland
Up Next Additionally, it follows in the footsteps of Orange, enabling free roaming in the UK