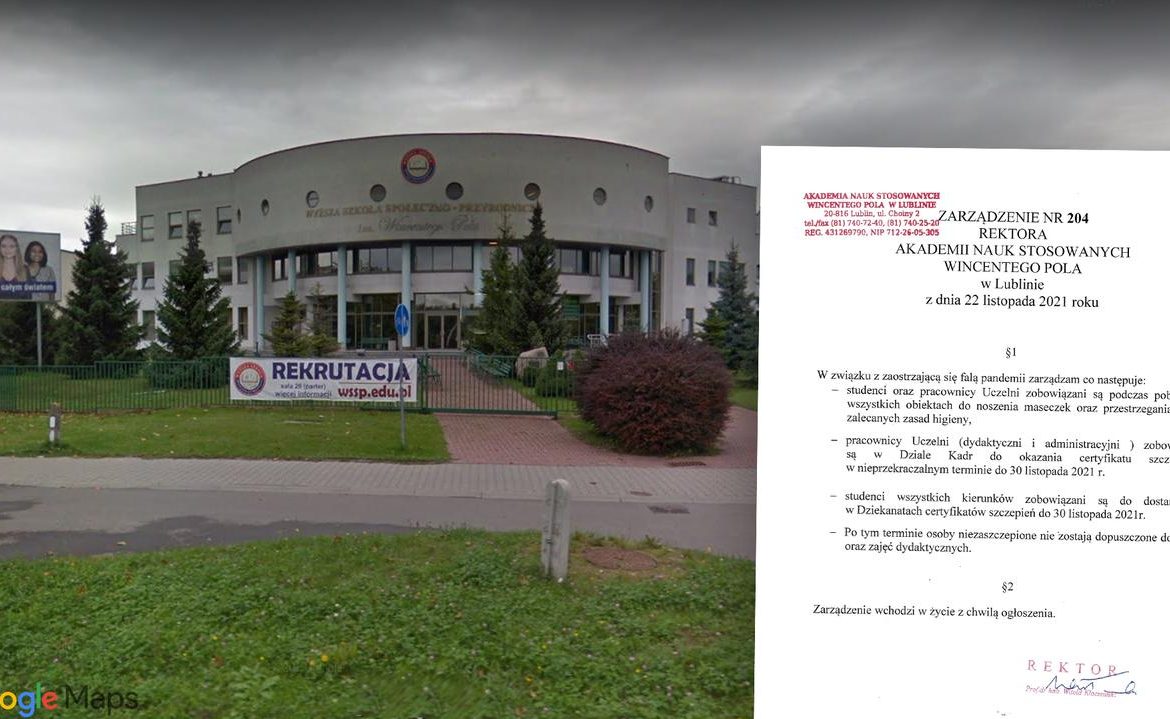 The President of the Wincenty Pol Academy of Applied Sciences in Lublin has issued an order that lecturers, administrative staff and students have until the end of November to present a certificate confirming vaccination against COVID-19. Otherwise, they will not enter the campus. This is the first university in the city to take such a step. Previously, similar rules were introduced by two universities in Warsaw.

Anyone wishing to enter the premises of the Wincenty Pol Academy of Applied Sciences in Lublin (formerly Wincenty Pol University of Social and Life Sciences in Lublin) after November 30 must be fully vaccinated against COVID-19. Such a rule was introduced by the rector of the university in a decree issued on Monday (22 November).

College only for those vaccinated against COVID-19

The document states that faculty and administrators as well as students must show certificates confirming vaccination against COVID-19 by the end of November.

“After this date, unvaccinated people will not be allowed to work and educational classes” – reads the decree.

Similarly, at two universities in Warsaw

The academy is the first university in Lublin that decided to introduce such rules. At the beginning of November, two universities in Warsaw were introducing similar regulations. This is the Public Theater Academy. A. Zelwerowicz and Private Medical University Maria Skodowski-Curie.

Wojciech Malajkat, dean of the Zelwerowicz Theater Academy, says his university has decided to take such a first step in Poland. The rules state that people can enter the campus: those who have been vaccinated with at least the first dose, those who have had COVID-19 in the past six months, and those who tested negative seven days ago. There are very few people in the latter category. Malaikat says the exams they take are paid for by the university.

He adds that the rules are in effect from the beginning of the school year and that each employee or student has a choice, because it is possible to take classes online.

– Immediately after applying the rules I received a letter of protest signed by 11 students. But after I talked to them, everyone decided they would attend class activities and stick to the rules. It is completely voluntary, and I also explained it to one of the deputies, the ombudsman and the various organizations that have sent us letters on this topic – explains the rector. He adds that so far he has received dozens of phone calls from deans from all over Poland who have asked for details of the solutions used in the academy.

– They were not only advisors to art academies, but above all medical academies. I will participate in an online episode with the latter in the coming days, during which we will talk about this topic, confirms Wojciech Malajkat.

Threats against the university president

a. Doctor Hub. says med. Krzysztof J. Filipiak, rector of MSC Medical University in Warsaw and co-author of the first Polish textbook on COVID-19, said that since the introduction of the new rules, he has received messages with threats and threats punishable by law – especially via social media.

– I post many of them regularly on my face book – says the professor. Krzysztof J. Filipiak. The interest of university deans is great. On this issue, there is a debate among the deans at the Nicolas Copernican University in Torun, among others – he confirms.

The rules in force at his university state that classes may only be attended by persons who have “(i) received a full vaccination against COVID-19 or (ii) completed home isolation, isolation or hospitalization due to SARS-2 infection, no later than before more than 6 months after the start of classes, or (3) they have a negative result of the diagnostic test against COVID-19.”

Students were required to submit documents confirming the above circumstances to the Dean’s Office by October 29.

– The regulation is still in effect, it is a classic transfer of the 3G model that is in force in most European countries. But I do not know what her future will be – admits the rector. – We just received today a letter from the human rights defender to Minister (Education and Science Przemyslav) Kazarnik regarding this decree. It makes clear, according to the Ombudsman, that the solutions we adopt, “although motivated by the right intentions, constitute an unjustified limitation of the constitutionally protected rights, that is, the right to education, as well as the right to privacy protection when the university processes students’ health data.” He also emphasized The spokesperson emphasized that “the legislator did not provide for the possibility of limiting the education of people who have not been vaccinated against COVID-19, nor did it establish a legal basis for the verification of this fact by universities” – quoting our interlocutor.

According to Filipiak, there is no room for violating the constitution, because Article 68 states that everyone has the right to health protection. – Coercion to study with someone who is not immune, which threatens the health and lives of others, violates – in a pandemic – this article, while the rector assesses it.

He adds that seven people have so far submitted a written protest and demanded a change in the law. Two fields of study are in nursing, emergency medical services and cosmetology, and the other is in medicine – science. When asked if students and lecturers who did not comply with the decree could participate in the classes remotely, he answered in the affirmative.

The answer we received the next day shows that MEiN has no indication that other universities, except for the three universities we describe, have imposed restrictions on unvaccinated people. At the same time, being an art teacher, Akademia Teatralna im. Alexander Zelorovich under the supervision of the Minister of Culture.

– In the case of the Wincenty Pola Academy of Applied Sciences in Lublin and Maria Skłodowska-Curie Medical University, we asked the deans to clarify the legal grounds on which they decided to take such measures and to provide urgent explanations in this matter. We understand that the solutions developed are undoubtedly the result of concern for the safety and health of members of the academic community. However, there are reasonable doubts about the legality of such actions. Its introduction could effectively be called into question from the point of view of protected rights, which would be constrained by such a solution – reports Anna Ostrowska, MEiN press spokesperson.

Don't Miss it Polish representation. The fight for promotion to the World Cup begins. Basketball
Up Next Amazon Studios is working on a Mass E…