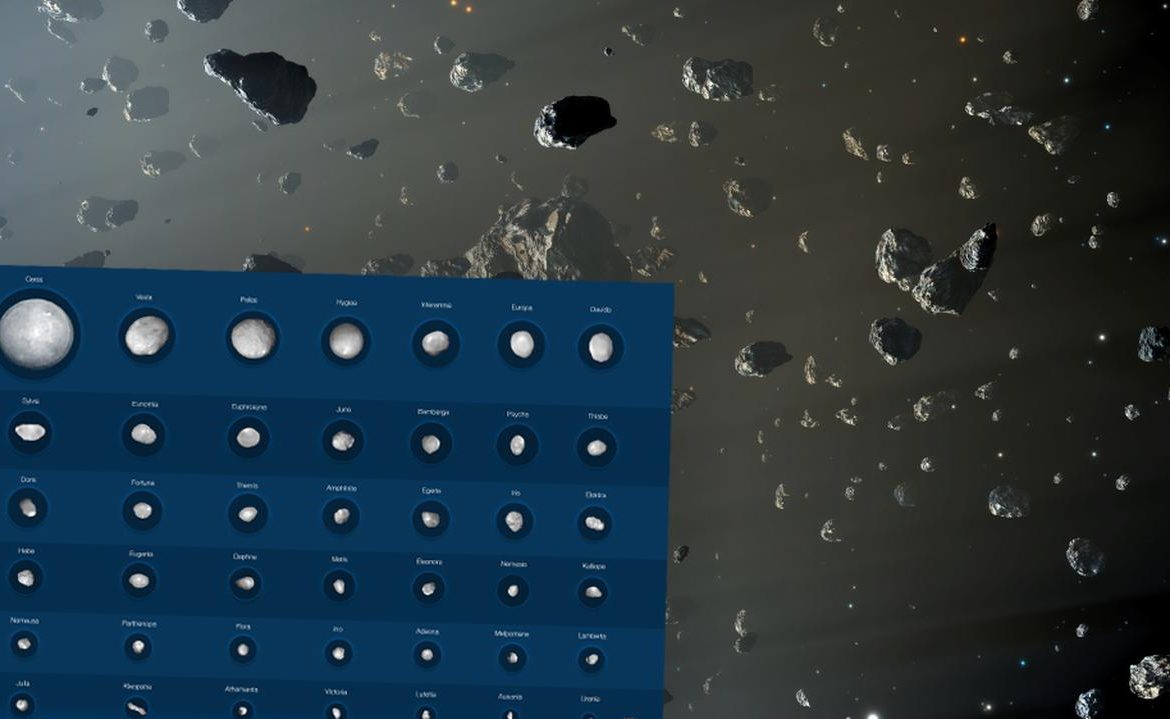 Astronomers have photographed the 42 largest objects in the Solar System’s main asteroid belt between the orbits of Mars and Jupiter. The European Southern Observatory (ESO) confirmed that such clear images had not been obtained before for such a large group of asteroids. Observations have allowed their density to be determined and their shapes to be known, and these may be very unusual.

An international team of scientists, including from Poland, has published the results of observations of asteroids (asteroids) made with the VLT telescope located in Chile, of the European Southern Observatory (ESO). Images are shown of dozens of the largest objects in the main asteroid belt between the orbits of Mars and Jupiter.

The press release published by the European Southern Observatory, on Tuesday, confirmed that accurate images of such a large group of asteroids constitute a leap forward in the study of these objects. Observations show a wide range of strange shapes, from spherical to dog bones, helping astronomers understand the origins of asteroids in the solar system.

So far, only three large objects in the main belt – Ceres, Vesta, and Lutetia – have been imaged with an adequate level of detail because the Dawn and Rosetta space missions have visited them. Our ESO observations have provided sharp images for many purposes, 42 in total, said Pierre Vernazza of the Astrophysics Laboratories de Marseille in France, who led the research in astronomy and astrophysics.

See also  Ghostwire: Tokyo Preludium for free on PS4 and PS5; The game will also hit the PC

The lack of detailed observations meant that the main properties of these objects, such as 3D shapes and density, remained largely unknown. To fill this gap, scientists conducted observations from 2017 to 2019.

Most of the objects examined have a diameter of more than 100 km, including almost all the larger ones, which measure more than 200 km (20 of the 23 objects in the main asteroid belt). The largest objects examined are Ceres (940 km) and Vesta (520 km), the first of which has been classified as a dwarf planet. In contrast, the smallest specimens in the analyzed sample are Urania and Osonia, each with a diameter of about 90 km.

The reconstruction of the figure showed that the observed asteroids are divided into two main families. The first are almost completely spherical bodies (for example, Hygiea and Ceres), the second are bodies of unusual elongated shapes (the most unusual here seem to be Cleopatra, in the form of dog bones). We wrote more about the discoveries about this asteroid at the beginning of September.

What is its density?

These large differences in density may indicate large differences in the composition of these bodies, which in turn could mean that they come from different regions of the solar system. So it is probably correct to assume that less dense asteroids originated in the far regions of the solar system, far from the orbit of Neptune, and then migrated to their current positions.

A very large telescope will be able to see more

Scientists hope that when the Extremely Large Telescope (ELT), which is currently being built by the European Southern Observatory, begins its observations within a few years, it will be possible to study asteroids with smaller diameters, from 35 to 80 km, as well as craters on their surfaces ranging in size from 35 to 80 km from the Earth’s surface .10 to 25 km. It’s also possible that dozens of objects can be imaged correctly from the Kuiper belt, a very distant group of asteroid-like objects.

Among the authors of the article published in the Journal of Astronomy and Astrophysics are several Polish names: Edyta Podlewska-Gaca, Przemysław Bartczak, Grzegorz Dudziński, Agnieszka Kryszczyńska, Anna Marciniak, Tadeusz Michałowski and Joel Adam B. Socha (Nieborowice). Astronomers from Poznan specialize in studying asteroids, particularly in modeling their shapes.

Don't Miss it Illegal immigrants arrive in Germany via Poland. ‘The number is growing fast’
Up Next slag. Raffaie Dubroque on Interia: He was the perfect choice