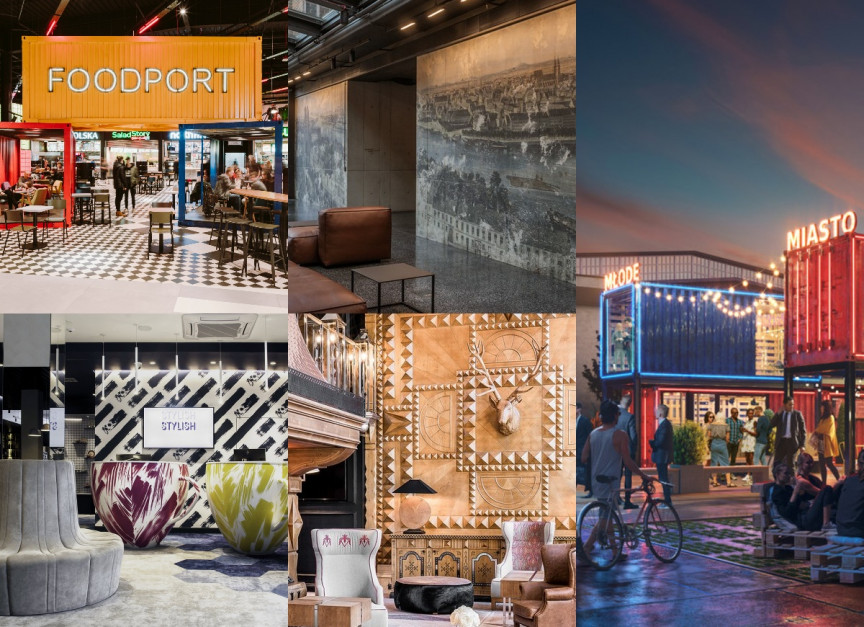 Architects avidly use local motifs in commercial projects. Thanks to them, they build a brand identity, indicate the heritage of the place, and provide storytelling in their projects. The local accent in the project may be a fresco referring to the famous city facility, but also, for example, port containers integrated into the arrangement of the space.

The redesign of the current dining hall at CH Galaxy Szczecin by studio MIXD reflects the local feel of the atmosphere of a seaside town where almost everyone had or had sailors and workers at the shipyard. The name itself, Foodport, is of course a nod to Szczecin’s tradition as a town where life revolves around the port – a point where ships are called from long voyages and where new ships are built at shipyards.

The designers from MIXD decided to recreate the visual atmosphere of the port. The central courtyard is approximately 2000 square meters. The dining hall is surrounded by a wall of containers covered with graffiti artists in Szczecin. Restaurants and other restaurants are somehow built in this circle and open freely towards its centre.

Here again we find single containers dividing the space, shards of different industrial floors – as if laid and completed over the years, until they turn into a veritable patchwork of tiles. A basketball court and stands made of pallets appeared on a real street in improvised style.

The 5-star Hotel Bridge Wrocław MGallery is located in Ostrów Tumski, in the historical part of Wrocław. Local studio Forum Architekci is responsible for designing the hotel, and Medusa Group is responsible for interior design. The investor is Tacit Investment.

The facility is located in Cathedral Square, directly opposite the neo-Gothic school building, and fits perfectly with the atmosphere and architecture of the ocean, forming a bridge between the past and the present. The building’s design includes numerous references to the architecture found in the Ostrów Tumski district – the regular rhythm of two-story columns, a prominent frieze, and a massive roof form. In addition, the architects translated the strict symmetry of the facade of the seminary into the axial composition of the hotel facade.

In the interiors we can find large-scale drawings in the form of reliefs on the walls, referring to the heritage of Wroclaw. These original renderings were created in collaboration with the National Museum in Wroclaw and the Kolektyf design studio. One of the distinguishing elements of the bridge is the water wall in the lobby, a reference to the Oder and the former bridge where the hotel is located today. The interiors also feature Gothic references, for example in the form of curtains with wax candles in the rooms.

The space around the Palio Office Park buildings

The project prepared by Cavatina is in line with the trend of revitalizing post-industrial urban spaces, inspired by the existing local heritage. The modern architecture of the Palio Office Park, referring to the traditions of the ports, will be complemented by a rich service and recreational infrastructure, thanks to which the inhabitants of Gdansk will restore the former square for their use.

See also  Deputy Minister Merzina Mashajik is a guest at the conference “Expected Changes based on the Education for All Model” - Ministry of Education and Science
Don't Miss it Weird West – We know the release date of the new game co-optwrcw Dishonored
Up Next These are JVC’s first OLED TVs! There’s HDMI 2.1, premiering in November! Cheap competition from the giants?