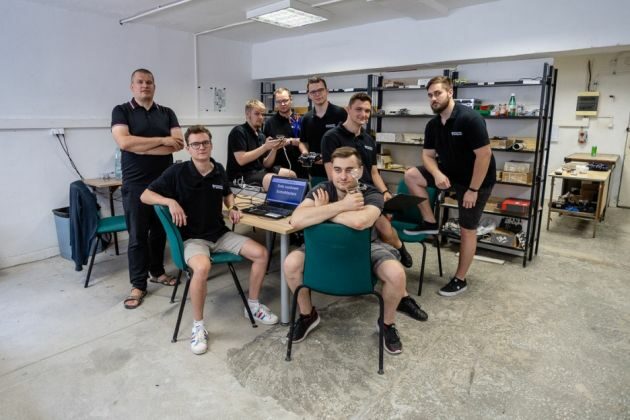 Another success of the robot from Białystok University of Technology. He won a prestigious competition in Japan.

Robots from Białystok University of Technology have already stood on the podium several times. This time, a robot from Bialystok took first place in the robotics competition in Japan – the All Japan Robot Sumo International Championships in Tokyo. It was created by SumoMasters – a department of the Robotics Student Research Group at the Faculty of Mechanical Engineering at Białystok University of Technology. It consists of students who have been building sumo robots for years, which are designed to be able to move and fight in the ring. Their robots have won many awards many times.

“As our biggest success, we can think of winning the world’s best team title in the Japanese competition in 2017,” says Marcin Dzyubek, a third-year second-class student in mechanics and machine building at the Faculty of Mechanical Engineering at Białystok University of Technology. – It was the first and so far only success of the participants from Poland in this competition. So far, no other team from our country has won this much in the Autonomous Sumo Robots category.

However, it should be noted that before the students could introduce the robot in Tokyo, they had to put a lot of knowledge and time into it. First, during a brainstorming session, young people from Bialystok made assumptions that the robot they had prepared should meet with him. Then they share responsibilities with each other.

– We share our work between mechanics, electronics and programming – says Marcin Dzyubek. – Everyone does what they are best at. We have some colleagues who prefer working from home. They are basically programmers – they come here, they show the results of their work and you can see that they are actually working at home.

Designing and building robots is an opportunity for a comprehensive exchange of experiences.

– The fact that a person deals mainly with mechanics and has dealt with it mainly for the past three years, does not prevent him from proving himself in other areas – in electronics or in programming – confirms Michai Valkovsky, a student of the third semester of second-degree studies in the field of mechatronics At the Faculty of Mechanical Engineering, Bialystok University of Technology. – For many years I dealt mainly with mechanics, then I decided that it would be interesting to learn something new and created the complete control system for the latest mega sumo robot: the main power and control panel.

Students gain a lot from working together, and acquire new skills that may be useful to them in the future.
In the Student Research Club, you can expand your competencies, and learn something new from colleagues from another college, says Marcin Dziobek. – This is a plus for the future in the first place – we go to work where interdisciplinarity is required, and we always welcome the broadest competencies.

Participation in competitions is also a lesson from which they can learn a lot. They know what needs improvement and what is already at a good enough level.

– When we have a robot ready, we put it in competition and check if our ideas are good, or if we are going in the wrong direction – Kacper Zalewski explains. For a robot to win, it must be fully autonomous. We cannot control it. After the start of the fight, it is forbidden to interfere with the way the robot works. We have to think of everything before starting a particular battle. Bots have many tactics loaded – we set the chosen option taking into account the type of enemy.

During the competition, they must also carefully examine the opponent to see if he is faster, stronger, etc. Thanks to this, they know what tactics to choose in the ring, where to set the robot, etc.

Participation in competitions is an opportunity to get to know many

Participation in competitions is not only a science experience for students. Thanks to them, they can meet people from all over the world and visit many places.

– At competitions we often meet other student research clubs from all over Poland – recalls Michal Walkovsky. – Most often these are wheels from ódź, Wrocław, Gdańsk, Warsaw. We often appear in the same teams, and we’ve known these people for years. Although we compete in the same categories, we are kind of competitive for each other, yet we maintain very good relations and share experiences often. There doesn’t seem to be such ferocity – of course – during the fight – yes, but after the fight we analyze the mistakes we made, and exchange ideas based on the battles we had. This bodes well for the future later on.

SumoMasters, a division of the Science Club for Robotics Students at the Faculty of Mechanical Engineering at Białystok University of Technology, is waiting for students who want to join the winning team.

Don't Miss it Modern pentathlon – European U-17 and U-19 Championships: Dębska and Jakubowska take gold in the U17 relay
Up Next TAURON Car Studio Cinema