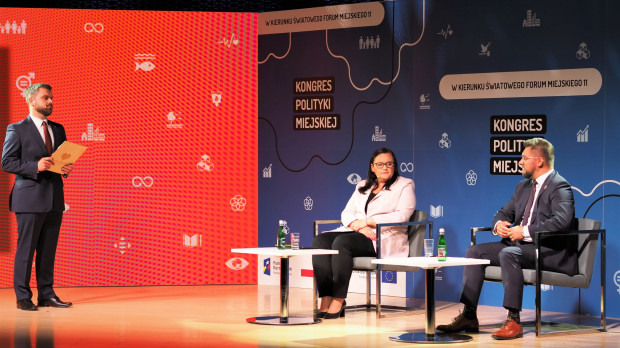 – WUF11 With new ideas, the new approach can serve as a positive impetus that encourages necessary actions in areas such as: adaptation to climate change, implementation of a circular economy, easy access to green spaces for all, priority treatment of pedestrians, bicycles and public transport – emphasized the Government Commissioner of the World Urban Forum 11.

As she emphasized, the post-pandemic reality prompted officials, city experts, local government representatives and academia to gather as part of the coordination team to prepare for the eleventh session of the World City Forum, to develop an Action Plan for Cities – Achievements from WUF11.

The plan consists of 4 components:

As part of the Urban Policy Conference, a V4+4 Ministerial Committee was organized on cooperation within WUF11 and the legacy of WUF11. Ministers Responsible for Urban Affairs in V4+4: Czech Republic, Slovakia, Hungary, Croatia, Slovenia and Romania discussed why it is worth participating in the World Urban Forum and how they will participate in the work of the programme. They also talked about including cities in Poland’s proposed Cities Action Plan, which would shape the legacy of the Eleventh World Urban Forum. In addition, there was a symbolic handover of the presidency of the Visegrad group to Hungary.

In the segment devoted to climate issues and the involvement of cities in the NAZCA (Non-State Climate Action Network), Minister Jarosińska-Jedynak emphasized the prevention of energy poverty. Poland plans to double the pace of building renovations. We plan to achieve the assumed goals by adding capital to the Modernization and Renovation Fund for Multifamily Buildings and the Clean Air Program for Single Family Buildings.

Don't Miss it Historic achievement for the Faroe Islands. Football the last great years
Up Next Anya Taylor-Joy and Ralph Fiennes will star in a culinary thriller…