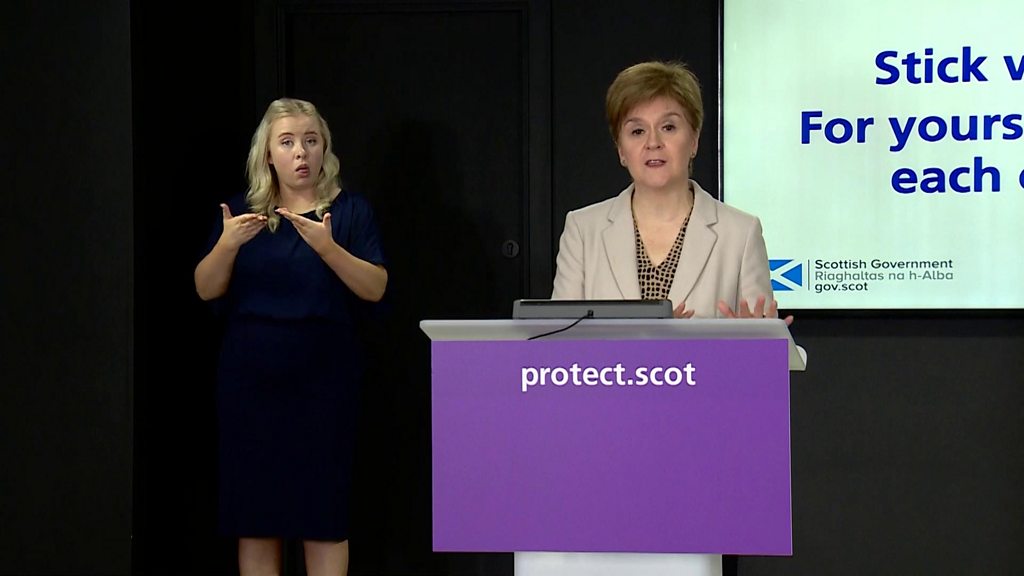 Nicola Sturgeon said new coronavirus restrictions on Scotland will be announced on Wednesday – but not yet another full lockdown.

On Tuesday morning, the Scottish Cabinet discussed options for the so-called “circuit breaker” to slow the spread of the virus.

But the prime minister said that people would not be required to stay home, and there would be no national travel ban.

Schools will only be closed during the October holidays.

However, the prime minister did not rule out imposing local travel restrictions, or the possibility of bars and restaurants being closed, in areas with high rates of HIV infection.

Ms Sturgeon was speaking as 800 new cases of Covid-19 were confirmed in Scotland.

The number of people infected with the virus in hospital increased by 44 overnight, and it now stands at 262, and 25 patients are being treated in intensive care.

The virus continues to circulate throughout Scotland, but particularly in central belt areas such as Greater Glasgow, Clyde, Lanarkshire, Lothian, Forth Valley, Ayrshire and Aran.

When new measures were imposed preventing people from visiting each other inside their homes two weeks ago, an average of 285 new cases were reported every day.

That number now stands at 729 cases per day, which Ms Sturgen said showed how the epidemic was “accelerating”.

The first minister said Scotland faces “the toughest decision point yet” if it is to suppress the virus before winter.

She said the country was facing a “sharp increase in the rate of reinfection,” with cases spreading from younger age groups to the older and more vulnerable population.

But she said the government needed to “strike a balance” between the public health toll and the broader costs of shutting down the economy and people’s lives.

Some tourism and hospitality companies have warned that they may never recover from the effects of any other restrictions affecting them.

Sturgeon said the wider damages of the shutdown “weigh heavily on her shoulders,” and said she hoped the fact “carefully looking” into this matter would reassure companies.

The prime minister will outline new procedures in the Scottish Parliament on Wednesday after further talks with ministers and advisors – but stressed that “we are not going back to where we were in March.”

She said, “We are not proposing another closure at this stage, not even temporarily.”

“We will not ask you to stay indoors like we did in March.

“ While we have been asking people to think carefully about non-essential travel, and while travel restrictions may sometimes be an option and necessary for hotspot areas, we are not about to impose restrictions on the entire country.

“We are not talking about shutting down the entire economy or stopping the replenishment of the National Health Service.

Regardless of the October holiday, we are not suggesting that schools be closed, even partially.

Sturgeon refused to rely on the specific measures being considered, but said its statement would address whether it should be imposed at the Scottish level or locally.

She will “outline the rationale” and the scientific basis for any decisions in her letter to MSPs.

Scottish Conservative Party leader Douglas Ross said any further restrictions would need to be supported by further measures to protect jobs and businesses.

“There has never been a single policy from the SNP anywhere close to the ambition of what (UK Chancellor) Rishi Sunak has put forth.

“All SNP has done is try to return the money to the UK government. Until now, they have given companies and people who fear losing their jobs nothing but empty words.

“The money is there for SNP to work. We heard this week that the £ 500m growth plan has delivered half of the promised financing. The lost millions must be handed over to the companies now, this week, before it’s too late.”