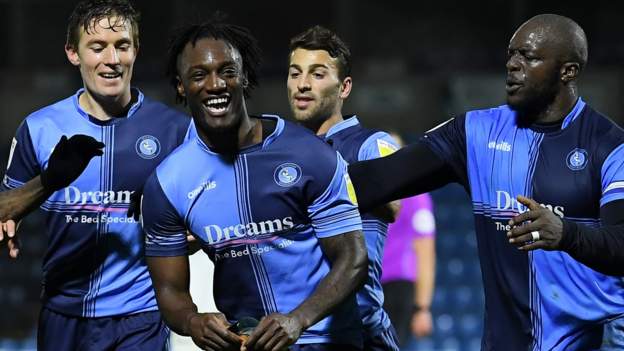 Wycombe Wanderers earned their first tournament point this season by drawing a draw with Watford at Adams Park.

Ismaela Sarr headed Kiko Viminia’s cross with a header to head the visitors’ lead in the 52nd minute.

But Wycombe, who lost their first seven league matches in that match, quickly regained their balance as defender Anthony Stewart nodded in a corner kick by Joe Jacobson midway through the second half.

They were denied victory late after Alex Samuel was ruled to block Watford goalkeeper Ben Foster, who diverted the ball into his own goal after a corner kick in stoppage time.

But the hosts dominated the game, having given the start of the season for the first time to 38-year-old target player Adipio Akinfenwa, and the former Watford youth player wore the Gareth Ainsworth team badge.

Akinfenwa missed a great opportunity with the scoring level in the 41st minute, as he fired on the crossbar with Foster stranded after Scott Kashkit was downgraded.

Moments later, Watford’s Joao Pedro scored a disallowed goal, as he inadvertently veered a low cross pass from the arm in a quiet first half.

Wanderers twice tested Foster through Akinvenua and David Wheeler early in the second half before Sarr opened the scoring with his first meaningful opening for Watford.

But Cherboys’ team was deserved and denied a complete turnaround with referee John Brooks punishing Samuels for fouling Foster, who deflected Jacobson’s corner kick into his net.

Substitute Glenn Murray then at Watford pulled a good effort wide with the last kick of the match. Wycombe maintains the 23rd position in the table while Watford ranks third.

See also  Lille - Chelsea: broadcast. Where do you watch the Champions League match?

“It’s amazing we got this point. I think it’s coming, all the hard work we put into in the last three games. We deserved a point and today I think we might get three points.”

“I thought we were the best team against a side that nearly stayed in the Premier League last season. It’s an exceptional effort from my kids, and I’m really proud of them.”

Regarding a late-on-no-go goal on his part: “It seems like there’s absolutely nothing wrong with that, but I don’t want to be a judge. I have said that I will not get involved in criticizing the officials. I hope in the second half of the season we get some. These decisions. ”

“(It was) a tough night, we were expecting something like this before the match. Today we didn’t do our job to the best of our ability.

“We had a lot of problems in our defensive form. When we had the ball we couldn’t make things. That’s something we have to work on.”