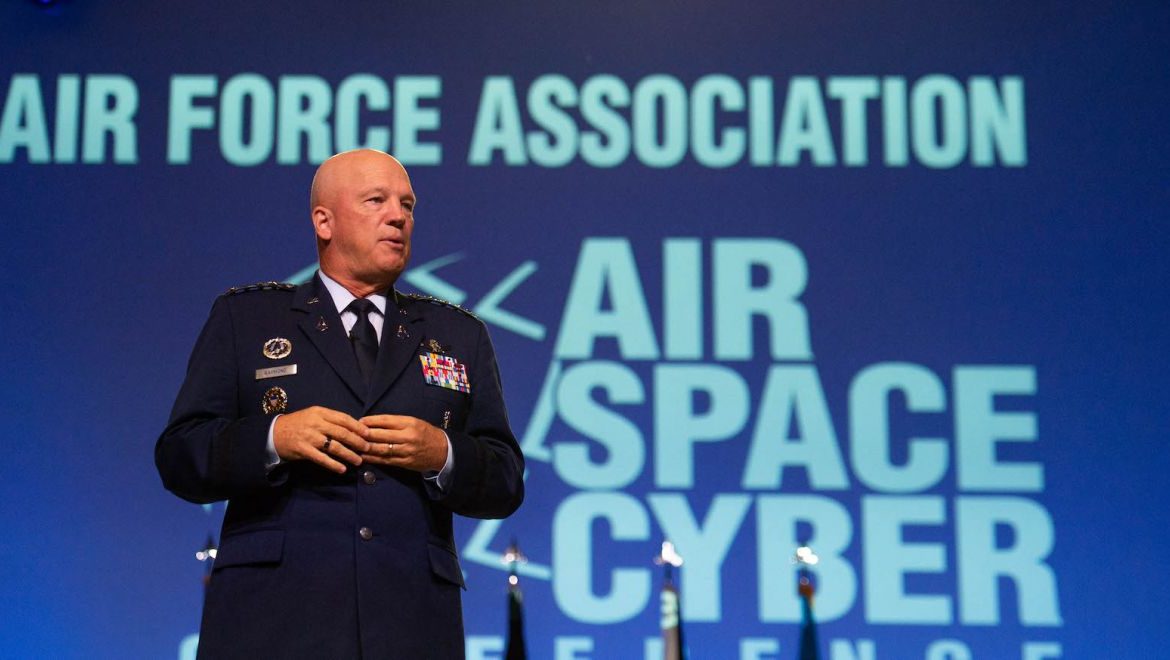 The component’s new uniform and insignia were presented in the presence of the Commander in Chief of US Space Operations, General John “Jay” W. Raymond. US Space Force personnel will use them in their daily service, in formal and ceremonial settings. Raymond stressed that a test batch of uniforms had already been sent to soldiers to evaluate and comment on their merits.

The uniform set includes a single-breasted dark blue jacket fastened with six silver buttons, arranged in a thread that extends asymmetrically and runs along the right side of the torso. On the left side, on the other hand, is the logo and title of the US Space Force – along with a place for the straps and a name tag in the shape of an elongated hexagon.

At this point, it is worth adding a few words about what it means to use this shape, and not the classic rectangular shape of the identifier. This is a direct reference to the fact that the US Armed Forces are made up of six components: the US Army, the Navy, the US Air Force, the US Marine Corps, the Coast Guard (National Guard) and the Space Force as the newest type of armed forces. In order to symbolically emphasize this fact, it was decided to use the aforementioned polygon as a dominant element of the USSF uniform.

On the other hand, the sleeves feature narrow silver edges. Silver appears with dark blue (symbolizing the depths of outer space). The first color appears on the collar and denotes the ceremonial scarves worn by students of this formation.

Did you know that the class of 2020 was the first graduation class to be enrolled in Tweet embed ?

86 students wear a silver sash at graduation indicating the space force officers with many of them being athletic rookies! #to fly pic.twitter.com/pgOzX4UjEU

On the other hand, Internet users have repeatedly pointed out the visual similarities of the new uniform with those in the works of films of the science fiction (sci-fi) category. Several commentators have pointed out the striking similarity to the uniforms used in the TV series Battlestar Galactica.

At least it doesn’t have six buttons like the ones in Battlestar Galactica!

Uh. Do not care. pic.twitter.com/bEnmYrxw7v

On the other hand, others pointed out feelings related to the series Star Trek – indicating that the designers of not only the uniform, but also the symbolism of the entire American space force, according to some commentators, did not refrain from copying the emblems and cutting out the directly displayed costumes.

The entire service is a Star Trek heist…. pic.twitter.com/pzAJ5OGUdO

The alleged inspiration has also been linked to actual patterns once introduced, as suggested by General George Patton for use in armored forces.

The US Space Force was established by decision of President Donald Trump on December 20, 2019. Their scope of service relates to conducting space operations (by sending and maintaining satellites) and ensuring the availability of services and activities based on space infrastructure. This includes securing US and NATO interests in space and ultimately securing the continued use of extraterrestrial space.

There are three commands in the USSF: Space Operations Command (SPOC), Space Systems Command (SSC) and Training and Readiness Command (STARCOM). The first of them is responsible for conducting orbital, cyber and intelligence operations. Subsequent command is responsible for acquiring, developing and implementing new solutions, including launch systems and satellites for the US Space Forces, and overseeing scientific and technological activities. The third and last is concerned with the training of USSF personnel, as well as the construction and implementation of research infrastructure.

See also  Hospitals in Greater Manchester suspend non-urgent surgeries | UK News
Don't Miss it Cycling World Cup: Filippo Baroncini wins the youth race
Up Next Great Britain lifts restrictions. “This is the first day to get back to normal.”