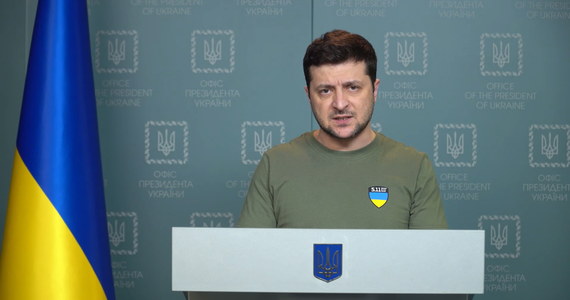 And on Saturday evening, the Ukrainian President, Volodymyr Zelensky, addressed his countrymen in another speech. He said, “You have to fight and expel evil from our land.”

You have to fight. Every time that is possible, you have to take to the streets and drive evil out of our cities, out of our land – said the Ukrainian leader in another word, referring to the organization of civil resistance against the Russians.

This occupation is artificial and temporary – added Zelensky, after which he described the actions of the Ukrainians who had not yet surrendered, blocked roads, chanted “Go home” to the occupiers and expel the Russians from the Ukrainian lands.

Then the president turned to the people who live in Donbass. Donbass, remember that we said that Donbass will not come to its knees. It’s your time Zelensky said.

I appeal to all people in the temporarily occupied territories. (…) For those who have not yet made up their minds – fight for your rights, for Ukraine exclaimed the Ukrainian leader.

As he said, the work of the Russian media is lying on a daily basis to society. He noted that, according to these means, it is the Ukrainians who destroy cities and kill, when in fact the crimes are committed by the Russians. “

Look at the schools and kindergartens that were bombed … Look at all that Russia did before your eyes, and therefore – defend yourself – Zelensky concluded his speech.

See also  Unrest at the opening of the Slovenian presidency

Don't Miss it How to settle income tax for 2021 with income in Great Britain? Brexit since 2021 has fundamentally changed the rules – check it out! [5.03.2022]
Up Next Trojan horse on Google Play. The famous QR code scanner was stealing passwords