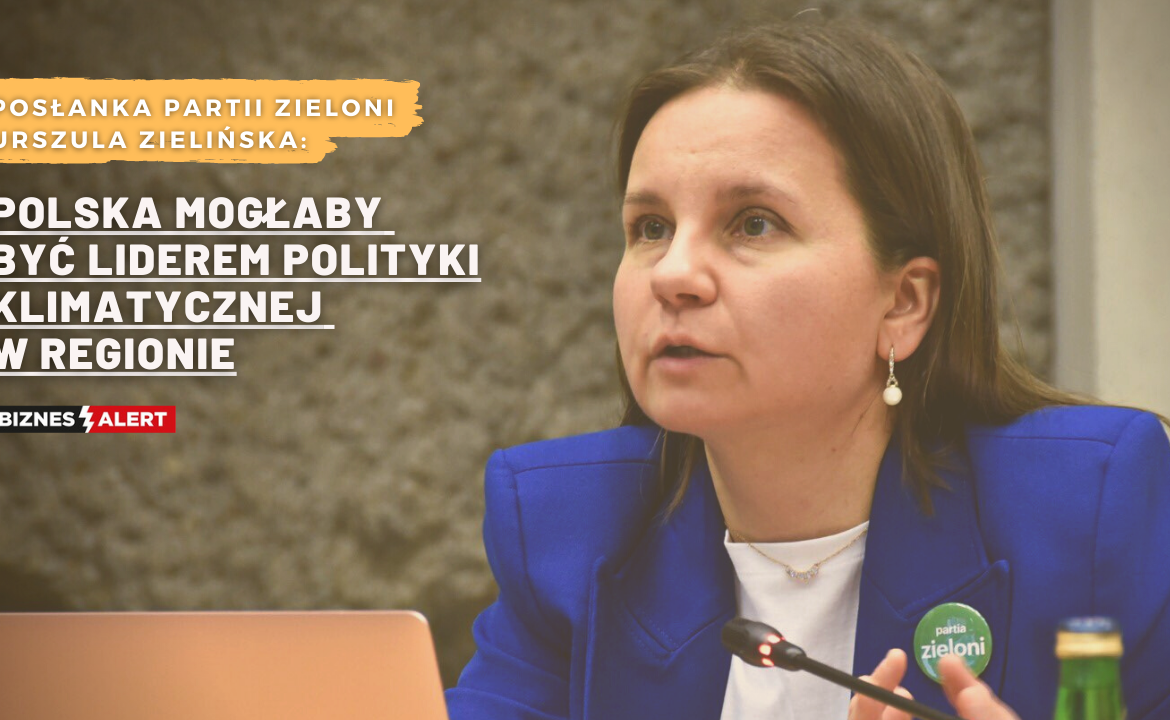 – I would like Poland to participate in the Climate Summit as a leader in Central and Eastern Europe. A leader in decarbonization, innovation development and a fair transition. As a large country that has always been at the forefront of changes in the region, we have such opportunities and this potential – says Ursula Zielinska, Member of the Green Party in an interview with BiznesAlert.pl.

BiznesAlert.pl: Do you think the pessimistic mood about COP26 is justified?

Ursula Zelenska: Yes, it is partly justified because the presidents of China or Russia do not participate in the COP26 summit. China and Russia are among the top five producers of greenhouse gases. Approximately 30 percent of carbon dioxide emissions are located in the Middle Kingdom. Unfortunately, they are absent from Glasgow A real reason for pessimism because we cannot engage in dialogue with them. On the other hand, there was also some positive news, such as the conclusion of an agreement to stop global deforestation. I myself have high hopes for the Glasgow Climate Summit, although I am also skeptical. Even British Prime Minister Boris Johnson warned a few days ago that the summit could end in failure, although he was somewhat optimistic so far.

What must happen for the COP26 summit to be successful?

First of all, one must adopt such national goals that will be consistent with the position of science and will allow to keep the increase in the average temperature on Earth below 1.5 ° C, as we decided in the Paris Agreement. The Paris Agreement scenario states that emissions must be reduced by 65% ​​by 2030 (compared to 1990), and net emissions will be achieved by 2040. This is the easiest way to remember, but not easy to implement, to contain the climate crisis.

How do you rate Prime Minister Mateusz Morawiecki’s speech at COP26?

It was interesting that Prime Minister Morawiecki boasted about the climate ambitions of the European Union. It was new. I am glad that the Prime Minister has finally noticed that the efforts of the Union are commendable (laughs). Europe has a fairly ambitious goal of cutting gas emissions by 55 percent by 2030 and becoming the first climate-neutral continent. This is what the Prime Minister boasted about. However, he did not provide any details about what he and his government would do to bring Poland closer to achieving these goals. The facts are harsh. Poland does not have a plan to decarbonize the economy, not even a plan to decarbonize the energy sector. In addition, the government does not have a detailed plan for achieving the goals of the Paris Agreement. Other countries have laws that regulate and monitor emissions limits for the coming years. Poland has no such regulations and no clear plan for achieving climate neutrality. The Polish government, like other EU countries, was obligated to prepare the so-called “National Energy and Climate Plan 2021-2050 – Long-Term Strategy” until January 1, 2020. Almost two years have passed since that date, and Poland has not yet submitted the plan to European Commission. The only document the government has, Poland’s Energy Policy 2040, assumes that our economy will remain partly based on coal until 2040. Prime Minister Morawiecki also spoke on Monday of a fair turn, and on Friday his party rejected an amendment to the law on hard coal mine work, which guarantees equality To receive one-time severance pay for all miners covered by the closure of mines. . Today, not all miners have access to such an evacuation. The Prime Minister also talked about developing renewable energy sources and promised 300,000 new jobs in this sector. Meanwhile, the Law and Justice Act government hampered the development of wind power in 2016, Solar development will be seriously slowed by the new settlement rules law from last week, and for new jobs – we don’t know exactly what the plan is. In short, Prime Minister Morawiki’s speech was full of empty promises without specifics, and his statements contradict the actual actions of his government.

What then is Poland’s role in international climate policy?

I would like Poland to participate in the Climate Summit as a leader in Central and Eastern Europe. A leader in decarbonization, innovation development, and a fair transition. As a large country that has always been at the forefront of changes in the region, we have such opportunities and this potential. Poland, along with the V4 countries, can negotiate with the European Commission support for our decarbonization plan and a specific plan for investments in new branches of the economy. Too bad that didn’t happen. I hope that’s what we’ll start doing soon.

Hungary fights Brussels, but puts itself at the center of climate policy at COP26

Don't Miss it How to revive Hogwarts. 20th Anniversary of “Harry Potter and the Philosopher’s Stone”
Up Next Shocking search results in the USA: Teens are ‘plugged in’ with screens. It destroys their health