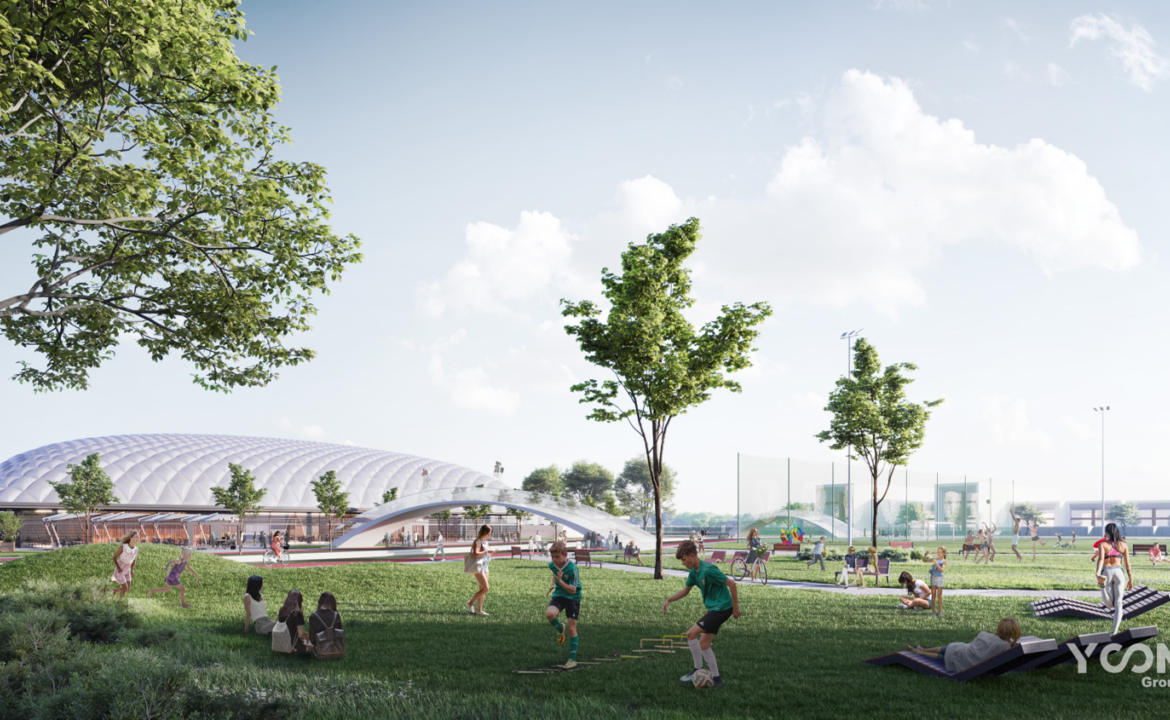 11 football fields, including one roofed, a school for indoor sports leagues, a skate park, a gymnasium, playgrounds, volleyball and basketball courts, as well as recreation areas for residents – these are elements of the Wrocław Sports Center. The Ministry of Culture, National Heritage and Sport accepted Śląsk Wrocław’s request, qualifying the project to build the center into the “Program of Investments of Special Importance for Sport”.

The development of the Academy is associated not only with the success of the first team, but also with the increased participation of the population of Wroclaw in sports, especially children and youth. Now Śląsk Wrocław is the largest football club in Poland in terms of the number of teams at the central levels, including women’s and men’s teams. The construction of the center will cover all training and matching needs. The investment plan includes 11 pitches – including two synthetic boards and one roofed one, comprehensive facilities (locker rooms, gymnasium and bioregeneration rooms) for all WKS teams and the club’s administration building. The venues will meet licensing requirements for the PZPN Central Games – Women’s Extrag, Men’s League Two, as well as juniors and juniors.

– We would like to treat the Wroclaw Sports Center as our common interest. The creation of such a center will provide a modern sports infrastructure that in no way will deviate from European standards, known from the academies of famous clubs. At the same time, we were able to design the space in such a way that it was also fully adapted to our privacy in Wrocaw. The innovative nature of the project is to combine, within a single complex, the recreation and sports area generally accessible to residents and the club dealing with professional football training. This place will also be associated with our values: love of sports, a healthy lifestyle, education and safety – emphasizes Jacek Sotrik, Mayor of Wroclaw.

The complex will be built in the western part of the city, near the Wroclaw Stadium, at the intersection of ul. Żernicka and al. Architects. It will cover an area of ​​23.67 hectares. In addition to football fields, residents will be able to use basketball and volleyball courts, a skate park, playgrounds, an outdoor gym and recreational areas on the Lugovina River. The space arranged in this way would fit into the design of the Nowe Żerniki (WUWA2) estate, which serves the local community as a place for leisure and regular meetings.

The facility will also be adapted to organize inter-club football tournaments for the youngest age groups for girls and boys. The center will also host training camps for the representation of the Lower Silesian Football Association and the Polish Football Association as well as training sessions and courses for the coaching staff. On the other hand, the commercial basis of the Wrocław Sports Center will be revenue from the activities carried out in the commercial part of the complex.

An important component of the Wrocaw Sports Center will be the Indoor Sports Championship School, which will host several hundred young athletes from Wroclaw and the Wroclaw conglomerate, practicing many disciplines (including handball, football, volleyball, judo, table tennis and basketball). The sports part of the center will also house the Football Association of Lower Silesia. The Wrocław Sports Center will be the only large sports complex in Poland located within the city limits. The location was also chosen because of the investment location in the immediate vicinity of both the public transport stations and the railway station.

– While working on this unique project, we were guided by our motto: Design and Build Your Dreams – which literally means Design and Build Dreams. We believe that the Wroclaw Sports Center is a dream come true for the inhabitants of Wroclaw. We are proud to have the opportunity to participate in the creation of a common urban fabric, which will be accessible to the residents of Wroclaw and Lower Silesia. The facility we designed is not just another concrete deck, but a green recreational space that will be able to revitalize the residents and develop the athletic abilities of the athletes. The project assumes a number of environmental solutions, including: rainwater retention, which will be used to irrigate sports stadiums and other green areas within the investment, photovoltaic systems that ensure power supply, and heat pumps as a complement to the system. We are pleased to have the opportunity to participate in the creation of this innovative idea – says Junsik Yoon, President of Yoon Group, sponsor of Silesia, whose architects prepared the architectural concept for the facility.

The estimated cost of the investment is 80 million PLN. The key element in the implementation of the project is to obtain external sources of financing. Several months ago, the club started the procedures for applying to qualify for the ministerial program “Program for Investments of Special Importance to Sport”. At the end of September, Śląsk Wrocław’s application was approved – the project was included in the multi-year plan of the program. Now the club will have three years to start investing. In short, government funding can be as high as 50 percent.

Don't Miss it slag. Thursday outside. The Premier League semi-final rounds are gaining momentum
Up Next El Dio de la Borra comes to Poland from the slave school