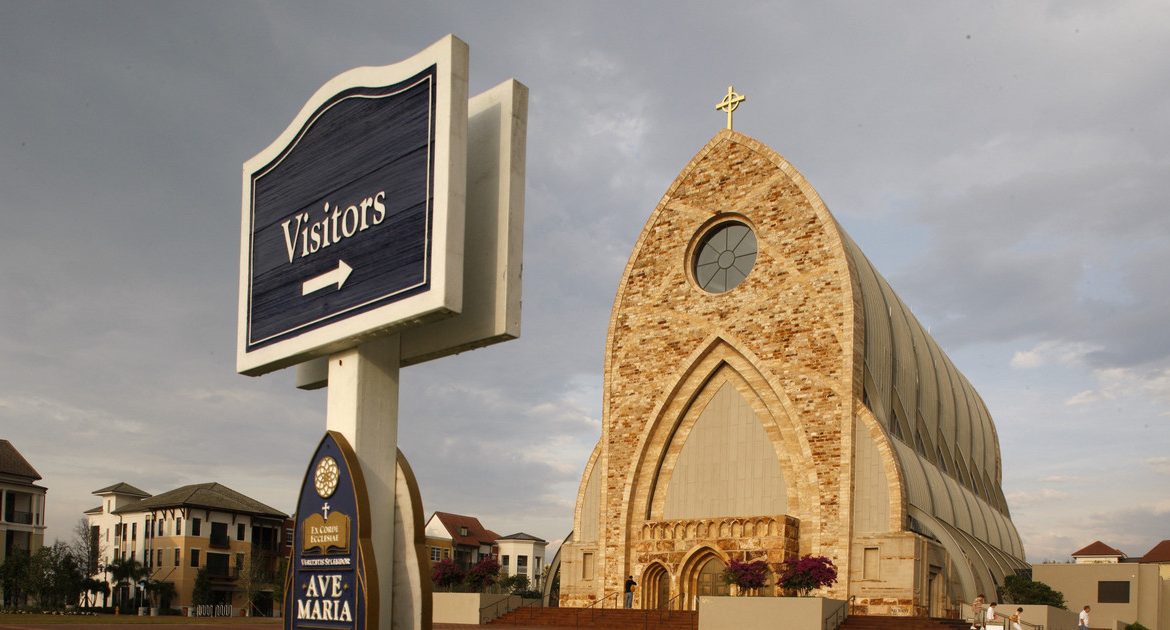 The history of the city of Ave Maria is still very short. Its creator is millionaire Tom Monaghan, owner of the world-famous “Domino’s Pizza” chain. Now the 84-year-old businessman, a devout Catholic for years, has long supported Catholic organizations, especially those aimed at protecting life. After leaving his company in 1998, he pursued his great vision: to create a private Catholic university with a “connected” city. – I want to save souls. I have received so much from God and now I want to give something to my neighbor. I will better help them go to heaven and avoid hell – Monaghan justified his decision.

The first attempt to implement the project in his hometown of Ann Arbor, Michigan, was unsuccessful. Monaghan did not obtain a building permit, so he moved to South Florida, where local authorities offered him widely undeveloped land near Naples. The first works on the construction of the university and the city began in February 2006, and a year later the campus was ready for occupation. At the same time, Monaghan took the position of rector of the university.

It is estimated that he invested about 250 million in the infrastructure of the university and the city of Monaghan. Countries. 11 thousand. And many shopping areas, construction work is underway in many places. The city center built in the Italianate style has been ready for a long time, and its main point – the church erected during the year from March 2006 to March 2007. Perhaps the architect who built it used Monaghan’s drawing.

The facade of the temple is decorated with a nine-meter-high scene of the Annunciation, in which the Archangel Michael greets Mary with the words: “Ave Maria.” The steel structure is also noteworthy, much of it can be seen inside and outside the 30-meter-high church that can accommodate 1,100 worshippers. To the left of the church is the university campus and to the right the city center. The oval square around the church is called the Square of the Annunciation. All city streets lead to it.

Strict regulations in the city

Over the past 15 years, people have moved to Ave Maria from all over the United States. Currently, the city has about 10,000. residents. There are already many restaurants, shops, medical clinics and schools. Residents enjoy the family friendly atmosphere and communication with like-minded people. Although most of them are Catholic, they stress that they are open to accepting anyone. Ave Maria submits applications for new citizens on its website and on social networks, providing homes, apartments and opportunities for recreation.

The private university is also gaining more and more recognition, outside the Catholic sphere as well. During 15 years from the beginning of its activity, it currently has a thousand students in various fields of study. Many young people can get scholarships. There are dress codes on campus: for example, strapless shirts, shorts, or clothes that are too tight are not allowed. Dormitories are separate for female and male students, and there are strict hours for visitors. While the rules are generally accepted, many students leave dormitories, especially on weekends, and go where there is more freedom and “nightlife”, such as the posh Naples beach not far away.

There are also other strict regulations on Ave Maria. In accordance with the wishes of the founder, Tom Monaghan, store owners are not allowed to sell contraceptives or pornography for example. There is also no Domino’s Pizza in town.

Don't Miss it United States of America. Companies experience a four-day work week. “It’s like a gift from heaven.”
Up Next Might and Magic 10 pulled from sale; Players review the bombing