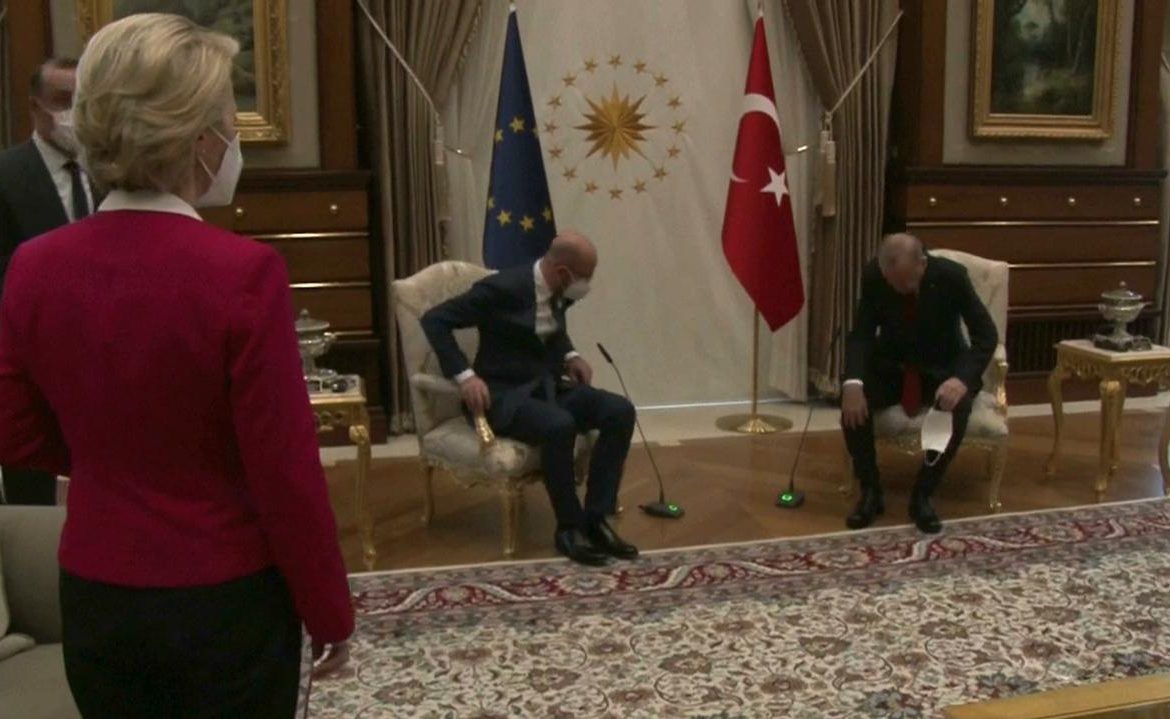 The President of the European Commission, Ursula von der Leyen, during her speech at the European Parliament, referred to the situation that occurred during her visit to Turkey, when a chair was not prepared for her in a meeting with President Recep Tayyip Erdogan. I do not find in the treaties any justification for this treatment. She said, so I must conclude that it happened because I am a woman.

Two chairs were set up in the room where the president’s talks with European Union leaders took place. Charles Michel sat next to the Turkish leader, and Ursula von der Leyen was forced to take a less formal seat on the sofa.

The video shows the president of the European Commission pointing to Michel and Erdogan. None of the men reacted to this uncomfortable position.

The recordings of this meeting were met with heavy criticism on social media and accusations of gender discrimination against von der Leyen.

The Turkish Foreign Ministry said in a statement after the event that “the applied protocol is in line with the Turkish principles and hospitality known internationally.”.

“I do not find in the treaties any justification for such treatment.”

On Monday, von der Leyen stated in one of her most passionate speeches in the European Parliament that Ankara did not have a chair for her because she is a woman. Von der Leyen believes the recording of the meeting with the President of Turkey “speaks for itself”.

“I felt offended and alone as a woman and as a European.”

– Would this have happened if I had been wearing a suit and tie? In the photos from previous meetings, she added, I didn’t see the chairs missing. Meanwhile, Ursula von der Leyen confirmed that she did not see any women in any of the photos.

I felt offended and lonely as a woman and as a European. She said it’s not about the number of seats or the protocol. – Goes to the heart of who we are. She added that our union is behind this. The European Commission president said the situation in Turkey “demonstrated how much more must be done before women are treated on an equal basis with men.”

Von der Leyen admitted that she is in “a privileged position” because she is the president of a respected institution and that she “can speak loudly and be heard”. “But what about the millions of women who are not in this position?” Every day we hear the voices of women who don’t have enough strength or office to speak up – she indicated.

See also  Biden: There is no reason for conflict with China, but I expect Xi to abide by the rules

On recording the incident in Ankara, she said, “There is no need for translation or translation.” “The pictures speak for themselves,” she said. But we all know that thousands of similar accidents, most of them far more serious, go unnoticed. Nobody sees them, nobody hears about them, because there is no camera, because no one cares about them. We have to make sure these stories are also told – they restarted.

“These pictures were offensive to a lot of women.”

The incident in Turkey was a disaster for the portrait of Charles Michel, according to The Guardian. The British newspaper expects that the former Belgian prime minister may not be re-elected. And the President of the European Council, von der Leyen, promised before his speech that such a “protocol incident” would never happen again, adding that he had not acted after that for fear of undermining the purpose of the visit. I have publicly expressed my regret about the situation. Michel stressed that I apologize to the committee and to anyone else who might be affected by this situation.

Ursula von der Leyen and I have pledged to ensure that this does not happen again in the future. To this end, he added, we have issued instructions to our protocol and diplomatic teams.

Now, of course, I understand that these photos were offensive to many women, but I want to reassure you of my complete dedication to promoting women and gender equality. He added that this is something that I have dealt with regularly in my political career.

See also  The head of the German Foreign Ministry announced the lifting of the veto in the European Union. Media: It's a 'warning shot'

Don't Miss it Study: Poles have more confidence in messenger RNA vaccines for COVID-19
Up Next Millennials love to use mobile banking apps