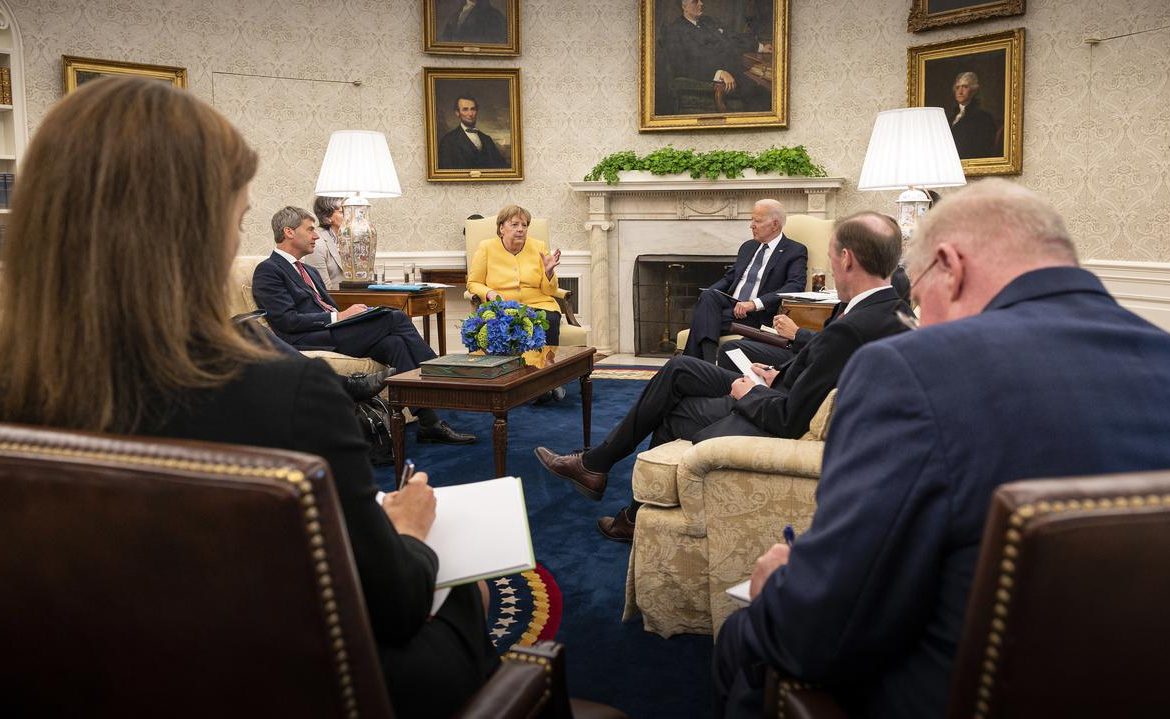 The talks between German Chancellor Angela Merkel and US President Joe Biden at the White House lasted two hours. The German chancellor is the first European leader to be adopted by President Biden in the White House. Biden, in turn, is the fourth US president that Merkel has met during her 16-year tenure.

During the press conference, after more than two hours of talks in the White House, the leaders emphasized above all the friendship between the United States and Germany, their views and values. Joe Biden thanked Angela Merkel for her “historic” role as the first woman prime minister, and joked that because of her frequent visits to Washington during four US presidents, she knows the Oval Office better than he does.

Biden stressed that the United States and Germany have a joint responsibility to defend the eastern flank of NATO against Russian aggression, and that these countries also share in support of Ukraine’s sovereignty and territorial integrity and the integration of Western Balkan countries with the European Union. Biden also stated that the United States and West Germany are united in their support for human rights as they are being undermined by “China and any other country.” “We remain united in the face of the erosion of democracy, corruption and false populism in the European Union, among candidate countries and wherever we find them,” he said.

Differences of opinion about Nord Stream 2

Nord Stream 2 was one of the few cases in which Biden and Merkel indicated a difference of opinion. Biden said he reiterated Merkel’s “concerns” about the pipeline, though he added that both Washington and Berlin were united in their opposition to using energy as leverage against Ukraine. “Good friends can tolerate differences of opinion,” he noted.

Merkel admitted that she and Biden “reached different conclusions” about the consequences of Nord Stream 2, but indicated that she would not allow Ukraine to be blackmailed in the energy field. – We will act actively if Russia does not respect the law of Ukraine as a transit country – announced the German chancellor.

She added that Nord Stream 2’s goal would not be to overlook Ukraine when it came to gas transportation. He added that the EU has a full set of tools, including the possibility of imposing sanctions to counter such a scenario. Talks between Berlin and Washington representatives on resolving the conflict have been going on for weeks. In return, Washington wants Germany to reduce the negative effects on Ukraine and the countries of the region by lifting some sanctions imposed on the project.

On the topic of sanctions, Joe Biden stated that when he took office, the project was “90 percent complete” and therefore “it seems pointless to impose sanctions.” He added that he preferred to start talks with the Germans instead. He added that it remains to be seen whether they will provide practical solutions that would contribute to increasing European energy security.

The leaders of the USA and Germany also announced the establishment of a Partnership on Climate Change and Energy, which aims to deepen energy security in Europe and ensure sustainable technological development of the energy sector.

On another controversial topic, the policy toward China, the German chancellor acknowledged that the United States and Germany may have different interests, but added that she wanted greater coordination of Beijing’s policy with the United States. She also stressed that Germany will not remain silent when it comes to human rights violations. However, she stressed that cooperation with China is essential, among other things, on climate change and trade.

The two leaders adopted the “Washington Declaration,” which outlined common principles of action and values ​​that will guide both countries in facing the challenges of the future.

The German chancellor is the first European leader to be adopted by President Biden in the White House. Biden, in turn, is the fourth US president that Merkel has met during her 16-year tenure. This is her last visit to Washington, where she announced her resignation after the parliamentary elections in Germany in September. Biden stated that he will miss meetings with the German prime minister.

Before meeting Biden, Chancellor Merkel spoke with Vice President Kamala Harris at her residence. She also received an honorary doctorate – her 18th title – from Johns Hopkins University in Baltimore.

The final item of the visit is a dinner attended by Biden, Harris, Merkel and their wives, as well as Republican minority leaders in the Senate and House of Representatives, Mitch McConnell and Kevin McCarthy. Guests will also include former US diplomatic chiefs Colin Powell and Hillary Clinton.

Don't Miss it When will we be after we fall on Netflix? Casting, release date and everything you need to know
Up Next Pole Łukasz P. poured acid on his former partner. out of jealousy