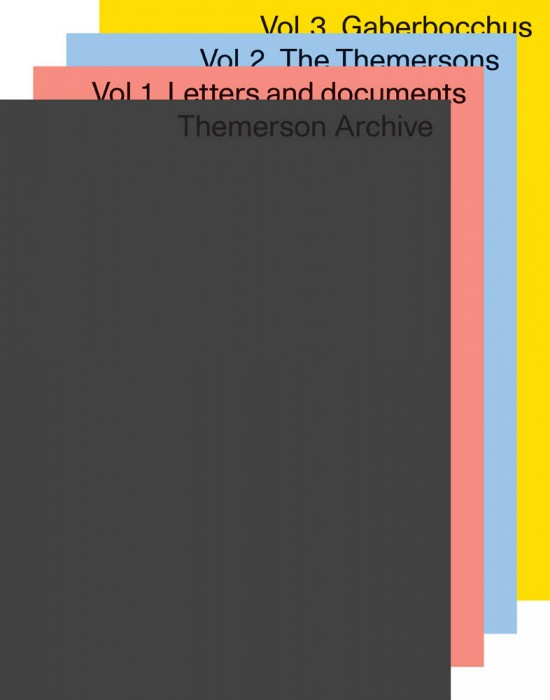 Published by Themerson Estate and MIT Press Three-volume edition of Themersons Archive. It included letters, documents, photographs, and artworks from the Stefan and Franceszik Thimerson Archives, including material from their avant-garde publishing house Gaberbocchus.

The three-volume catalog, created in London in the years 1989-2015 and recently published, displays the contents of the Themersons Archive deposited at the National Library in Warsaw.

“The initiative to publish the catalog came from the heirs of Francesca and Stephan Thimerson. The people who actively worked on their legacy for thirty years after Thimerson’s death are the art historians, Jasia Richardt, daughter-in-law of Francesca and her late partner Nicholas Wadley,” Clara Kopcińska, painter of culture, and representative of Themerson Estate in Poland .

The third volume contains information about Themersons – Gaberbocchus Press (1948–79) and the Common Room. 70 books were published by Gaberbocchus, the first leading publishing house in Great Britain. His ambition was not to publish too many best-selling books, but to “best viewers,” providing titles that had not yet been translated into English, and those that were not interested in more commercial publishing houses. The Common Room was a discussion club for artists and scholars – the first of its kind in London.

The creation of this catalog is the result of more than thirty years of work done by many people. Clara Kopchainska has also been involved in work related to the archive.

“I ended up in an archive in London, or rather in a room that was just starting to be one, shortly after the death of the Thimmersons (they died a few months later, both in 1988) when I was young right after graduation. The first of the work was emptying the boxes in which all the artists’ belongings arrived: there were letters, notes, drawings, documents, photos, photographs, galleys, and also completely unrelated papers, so they were all reasonably marked and divided and placed in the appropriate files. Themersons hated the labels, and in At the same time everything that was left of it had to be classified so that I could move around.Later on, I also translated texts that had not previously been translated, and after my return to Poland, I collaborated with several people to promote their work, with Piotr Rypson we organized an exhibition for Themersons + Oko i ucho + at Ujazdowski Castle in 1993, with Marek Gala Sincher we had a selection of texts and drawings in Płock, also collaborated at the Themersons Festival in Gdańsk, organized by Jadwiga Charzyńska “- Kopcińska for PAP.

“After me, a few people worked in the archives, including Małgorzata Sady, but of course Jasia and Nick made the most effort, periodically putting aside their careers so they could carry out the next phase of work. Today, more than 30 years after their deaths. The Themersons, when the archive could already be considered a closed collection and when 3.5 tons of material were donated by Ja of Reichardt to the National Library, it was possible to + seal + end this process by issuing a catalog of most of the documents that remained of this very creative pair. That the National Library would do it, but it didn’t, perhaps for financial reasons. The publication is a project by Themerson Estate and MIT Press, which piqued his interest in the topic after showing the online version of the catalog created by Jaś and Nick. I am the representative of Themerson Estate in Poland, You can contact me with all questions + personal, I will try to help them or direct them to the right person, “he adds.

Although the Polish catalog is not yet planned, Kopcińska believes the publishing house will contribute to popularizing the production of this pair of artists.

“The publishing house is aimed at everyone who is interested in the life and work of Francesca and Stephen Thimerson. Although they are not particularly known to a wider audience, the specialized interest in their work is very great. I and Jasia Richards receive a lot of questions, at the moment a film is being written about them, Article Knowing, a few months ago I had the pleasure to announce their films being shown during the virtual London edition of the Emigra Festival. Sure, they are a couple who have always had a group of fans who, as Jerzy Pralczyk claims, want everyone to know Themersons, on the other hand. , That they have only for themselves. This post will definitely help in finding and popularizing their work. For many years, Stefan has been a more conspicuous creator, but I would like Francesca’s character, who was very charismatic, to come out of the shadows., A strong, intelligent and hard-working artist, “she explains .

Kopcińska also maintains that Themersons can still be an inspiration for many artists.

“Themersons can be an inspiration not only to artists today, and in many ways. The first is about attitude, and above all, the courage to go beyond usual patterns, try new things, and undertake activities in many fields – it can be said that he is included in the spirit of the avant-garde but, on the one hand. Other, the Themersons were humble and rare among all the avant-garde, and the awareness that the + world is more complex than our facts about it +, and that it must be viewed from different perspectives. What they had to communicate was searching for the best way to convey the moral messages that Stefan Thimerson himself called Old-fashioned – such as the great association with the notion of decency, specifically capital P. Even a higher goal does not justify inappropriate means, a certain fitness of means that are the goal above the goals ”- he asserts.

Stephan Thimerson was born on January 25, 1910 in Block, and his future wife Francesca on June 28, 1907 in Warsaw. Both came from cultured and integrated Jewish families. They met during their studies in Warsaw – she graduated from the Academy of Music and the Academy of Fine Arts, studied architecture and physics. They had been working together since the end of the 1920s, illustrating Hebrew elementary schools, and writing fairy tales for children, supplemented with her drawings. They spent money from the books on their experimental films. They even founded a filmmakers’ cooperative, which included young left-wing filmmakers, including. Alexander Ford, Wanda Jakoboska, young musician, and Lutoslavsky born

Stefan Thimerson built a special table for deceptive shots: The camera recorded objects lying on the glass from below. They played with light and shadow and put the negative as well as positive. They managed to make seven films, most of which were lost during World War II. Themersons’ most famous pre-war movie of 1937 was “The Good Man’s Adventure” – “Irrational Humor” about an official who suddenly begins to walk backwards. Other residents are angry, and hold signs that read, “We all go first!”

A year before the outbreak of World War II, the Themersons left for Paris, where they intended to continue working on experimental films. In September 1939, they both reported Polish units formed in France: they were sent to London, to the Ministry of Information of the Polish government-in-exile, where the unit in which Stephan had fought was destroyed. Only after two years did he manage to get to London for his wife. During the break up, Thimerson wrote his first short stories and novels for adults including Professor Mmaa’s experimental lecture on the termite world’s encounter with humans.

In London, Themersons produced “Calling Mr Smith”, which was meant to stir the consciences of the English, showing how the Germans are trying to make Poles a nation out of the illiterate by preventing them from learning and participating in culture. The Thimerson families died in the Holocaust, only Francesca’s niece, teenage Jasia Richard, who was removed from the Warsaw ghetto just before his liquidation, survived. Themersons brought her to London in 1946 and she adopted it.

In London, Themersons taught at art academies, books and comic magazines. In 1948, they founded the Gaberbocchus Press Publishing House, where unique books with Francesca illustrations were published in low circulation. The biggest hit was the first English version of Alfred Jarry’s “Ubu Król”, which was reprinted several times later. In 1953, the philosopher, logician, and writer Bertrand Russell, who won the Nobel Prize in Literature in 1950, was pleased with the quality of the Thimerson Publishing House books, which published A Primer for the Good Citizen (1953), illustrated by Francesc.

In 1948, in Bayamus, Themerson included his theory of semantic poetry, which was the result of experiments with nonlinear graphic notation that replaced words with their definitions. He gained international fame as the author of novels, short stories and essays, blending exoticism with philosophy, and freely transcending the boundaries of literary genres. Thimerson’s novels are philosophical tales in literary form, among others “Tom Harris”, “Euclid was a donkey”, “Hobson’s Island”.

The Themersons have worked together their entire lives, and they are alone in a great love. After the death of Francesca, who had died of a stroke in June 1988, he refused treatment, although he was also seriously ill. He passed away a few months after the death of his wife – in September 1988.

Don't Miss it It wasn’t a fruitful leadership lesson. The brothers turned over, then lied that the car had been stolen
Up Next USA: The cyber attack on Microsoft affected tens of thousands of companies