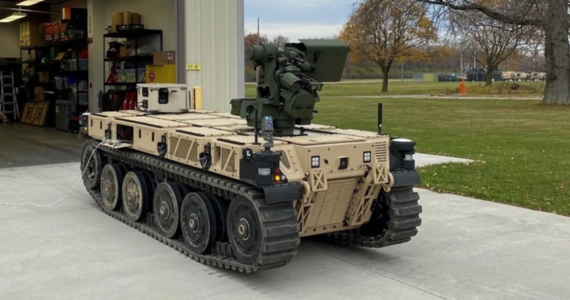 “When you are in the dark and you hear cars approaching, but you don’t really know where they are, the level of fear increases” – with these words summed up the new robots, Ross Kaufman – Major General and Team Manager responsible for implementing modern combat vehicles. Robotic Combat Vehicles (RCVs) are fully automated machines that may soon completely change the concept of the battlefield.

These are robotic combat vehicles powered by a highly efficient electric combustion engine. The devices will be available in three versions as planned. We are talking about the heavier, more heavily armed, medium-sized RCV-M and light RCV-L, often used for reconnaissance purposes. Vehicles differ from each other not only in size, but also in load capacity and performance. The middle model weighs almost 4 tons and can accelerate to speeds of up to 60 km / h. The larger robot can travel at a speed of 40 km / h, and it is additionally equipped with a 30 mm remote-controlled cannon.

QinetiQ North America and Pratt Miller are responsible for developing a prototype combat vehicle. The engineering team won their production contract a year ago – in November 2020. Four vehicles have already been delivered to the US Army Ground Vehicle Systems Facility. Here they are combined with a specially developed independent program.

All machines are tested in Fort Dix, NJ and Fort Carson, CO. Although the experiments that are currently being carried out relate only to the basic principles of their operation, the robots will soon be transferred to another unit, where they will undergo extensive combat tests. Initial assumptions are that they will be transferred to the main stage of engineering and production development in the second quarter of fiscal year 2023.

Don't Miss it The last day of the Festival of Garden and Public Space Arts – Polish Radio Lublin
Up Next How much will Angela Merkel’s pension be?

Mishaw Baranowski, head of the German Marshall Fund office in Warsaw, said during the European Economic Conference: – The center…

“Robot” (CC BY-SA 2.0) by mutednarayan Within the science fiction genre, a familiar trope is the automaton that works with perfect logic but fails…

In November, the United States opened its borders to tourists, incl. from Poland. Vaccination certificate and negative coronavirus test results…

Founded in 1910, the Boy Scouts’ association initially had a mission to “prepare young people for ‘correct’ moral and ethical…

The KGHM Board of Directors has approved the conclusion of a tripartite agreement between the company, the US company NuScale…

“President Emmanuel Macron has decided to return the French ambassador to Washington next week,” the White House said in a…