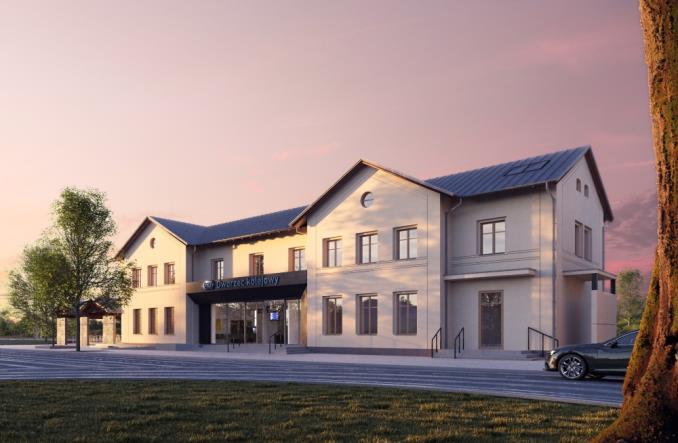 Functional, with a modern space for passenger service, a renovated facade and perimeter, as well as comfortable, accessible and environmentally friendly – this is what the Opalenica station will look like after reconstruction. PKP SA has signed a contract to modernize the facility.

The investment in Opalnica is part of the Railway Station Investment Program for the period 2016-2023, which will cover nearly 200 railway stations across Poland, including up to 13 stations in the Greater Poland Province. Thanks to EU funding, the plant will undergo a comprehensive rebuilding process. The body of the building will have a slightly different appearance. It is planned, among other things, to demolish the walls on the ground floor and replace them with glass facades. The details of the facade and roof sheathing will be recreated indicating the historical appearance and symmetry of the windows on the north facade. A bicycle shed with 56 parking spaces will be built at the annex location on the west side of the terminal. The walls of the future structure will be made of architectural concrete. According to the architect, the shape of the body would indicate the brick building that was located in this place. The new exterior of the station at Opalenica will be emphasized by the night illumination of the complex.

– Signing a contract with the contractor for the reconstruction of the station building in Opalnica is another element to prevent the exclusion of the transfer. Residents of another smaller town in the Greater Poland Province will have access to a safe and comfortable railway infrastructure. I hope that the modern and environmentally friendly building of the station will become an important center for the local community and will make it easier for passengers to travel by rail to Poznan – says Andrej Bettel, Minister of Foreign Affairs at the Ministry of Infrastructure. – Our goal is to make the station in this city practical, comfortable, accessible for all groups of travelers and be more environmentally friendly – says Irenos Malani, Board Member of PKP SA.

The station’s service space will be arranged in a modern way, with an abundance of natural light. You will enter inside through the glass facade from the city side and the large windows built into the facade from the platform side. Inside, travelers will find a spacious waiting room with seating, timetable interfaces, electronic departure and arrival boards, and a state-of-the-art audio information system. There will be ticket offices, public restrooms and a commercial and service facility in its vicinity. There is space for rent on the first floor of the building.

Rebuilding the Opalenica station will make it more accessible for people with reduced mobility and safety. Architectural barriers will be removed and a number of improvements will be implemented, such as pathways with attention areas, braille signs, and touch panels with the station’s outline and perimeter. In addition, there will be devices for signal amplification in hearing aids in ticket offices, as well as toilets for people with disabilities. Modern security systems will be used at the station: surveillance and access control systems, burglary and theft, and fire protection systems.

During the reconstruction, the station will become more environmentally friendly. Thanks to facade insulation, the use of heat pumps and the installation of new windows, doors and facades with a low heat transfer coefficient, the building will be more energy efficient. The project also provides for an energy-efficient and fully automated lighting installation. The Building Management System (BMS), which controls the operation of all fixtures and devices at the plant, will be responsible for optimizing the plant’s electricity, heat and water consumption.

As part of the investment, the immediate vicinity of the station will undergo a transformation. The roofs will be rearranged while creating pathways for the blind and visually impaired. Near the station, it is planned to install small architectural elements (benches, baskets, lighting) and arrange green spaces.

The total cost of rebuilding the Opalenica station is a total of PLN 8.7 million. The planned completion date for the investment is the second half of 2022. The project for the reconstruction of the building was prepared by the Demiurg Studio from Poznan, and the contractor for the construction work is Agrobex from Poznan.

Don't Miss it Can I Use SPF Cream at Night?
Up Next InPost will launch more refrigerators – this time in Wroclaw