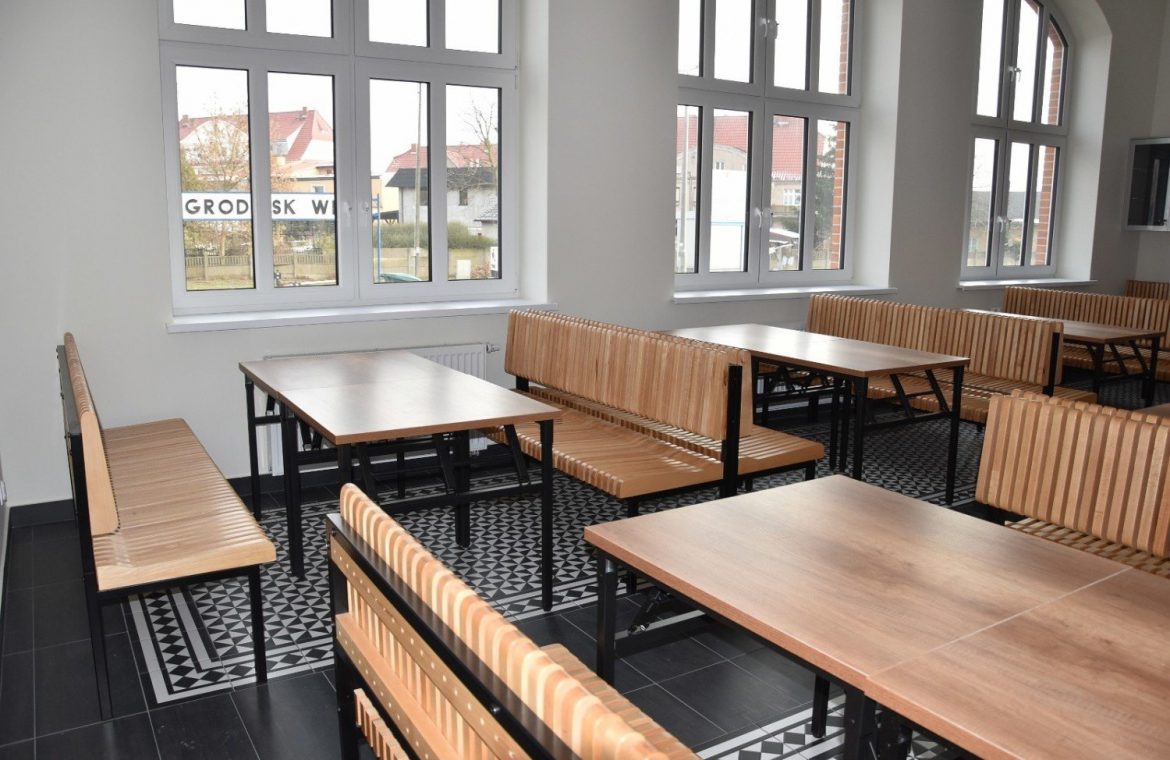 Work on the renovation of the former Grodzisk railway station building has ended, and residents are wondering when the Social Economy Center will be launched? The facility has gained a completely new face and it is hard not to admit that its modernization was an attraction.

The renovation of the former railway station building was the biggest task our municipality undertook last year. This was possible mainly thanks to the European Union funds obtained, which greatly increased the budget for this investment. Both the current and former mayors emphasized numerous times that the mission would not be possible without outside support.

The project was co-financed by the European Fund for Regional Development under the Wielkopolska Regional Operational Program for the period 2014-2020. The total value of the executed works amounted to approximately 4.6 million PLN. Co-financing from European Union funds is just over 3.8 million.

Let us also remind you that Przedsiębiorstwo Budowlane Budomont Sp. Z oo has taken over part of the construction work. z oo from Kościan, and facility equipment – Dom-drawed company from Grodzisk Wielkopolski.

It’s hard not to be satisfied with the results. The building gained a new glow, and it may never have looked so good. Really beautiful, and it still smells fresh. Now our task will be to fill it with activities, but we are not lacking in ideas. I hope it bustles with life soon, says Mayor Piotr Hogan, that not only becomes another facility supported by the municipality, but will truly serve residents.

It’s hard not to admit that the facility is amazing. She gained a completely new face, but the station’s character was preserved. The black and white tiled floor adds style, but also the wooden benches hint at old railway utility equipment. An interesting element, located at the focal point of the building, is the forgotten historical spots in the attic. Now it will please the eyes of all visitors to this place.

What will be the center of the social economy? The place is intended for all residents of the municipality. A large part of the activities will be directed towards socially excluded people, because that is the idea behind this project. It is not only about exclusion that is directly understood, that is, disability, it is also about people who are constantly looking for their place in life, want to pursue their passions, but have no place or need to instill it in them. This is what this activation and social development space is supposed to serve the population – as Piotr Hogan explains.

Tailor shop, beauty shop, pottery workshop, railway station cafeteria – these are just a few of the places that have been created in the center of the social economy. The latter will be run by a social cooperative. There is a cultural and entertainment space on the second floor, which will operate in conjunction with the Grodzysk Public Library and the Rondo Cultural Center. – This is where the various artistic activities, meetings and maybe even take place Book discussion club. The possibilities are endless. In other words, we’re collecting the ideas – since we’re at the station, it’s time to create a new one timetable– The mayor adds.

The first idea to use this space was to move the library here. However, the municipality did not receive funding for this purpose and a decision was made to submit another application, this time to establish the Social Economy Center.

The only opportunity to renew this facility was social stimulation, hence the idea. It is often heard in the city that residents have nowhere to go, and nothing to do. We have created a place where activities like this can be carried out, but it will also be possible to help those who do not find themselves fully in today’s world. I would like this space to serve not only the elderly, but also the young Grodzysk.

The mayor assures that this place should be open primarily to the needs of the residents. This means that anyone looking for a space to pursue their interests will be able to use the opportunities provided by the Center for Social Economy.

But the revitalized terminal building will also retain one of its primary functions – it will be available to travelers at all times. With them in mind, the waiting room has been separated, which will be open during the center’s business hours. There will also be a cafeteria managed by a new socio-economic entity. It is run similarly to the “Na Piątkę Social Cooperative”, which has been in operation in our city for several years Disabled peopleWhich, as Piotr Hogan explains, in such places they can learn duty and responsibility and join community life through their work.

The facility is ready and residents are asking when it will open. However, the mayor points out that it does not make sense at the present time to launch the social economy center, because due to government restrictions and restrictions, it cannot function anyway. – The real date is March, but we will see how it all turns out – he adds.

Don't Miss it “I have an experience in the bunker where mafia trials took place.”
Up Next Britain’s exit from the European Union is at a turning point, with only two weeks left