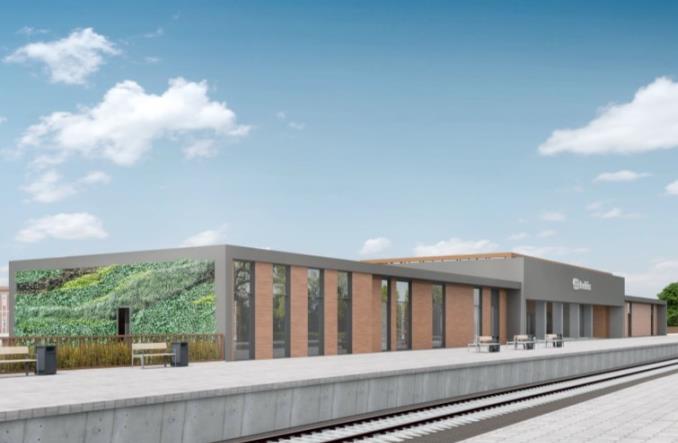 Functionally designed space, balcony above the main entrance, cubist shape, modern interior as well as green walls on the facade – these are just some of the features of Racibórz railway station after reconstruction. PKP SA has signed a contract with the contractor.

The reconstruction of the railway station in Racibórz is one of the six investments made in the Silesian Voivodeship as part of the railway station investments program for the period 2016-2023. Thanks to her, the station will acquire a completely new face and functionality. It will cease to be just a building for travelers, but will also become the center of cultural life in Racibórz. perceptions here.

The body of the former railway station, built in the 1970s, will undergo a massive transformation. The building will consist of three functionally connected sections. The elevation of the station will acquire a modern and somewhat industrial look. A large area glass is designed in the facade to illuminate the interior of the building. On the ground floor, between the viewing windows, wire facade cladding was chosen, while on the first floor, the spaces between them would be filled with clinker bricks. An interesting decorative element in the most representative central part of the facade would be the placement of corten steel columns in the height of the first floor (this is a special type of metal with a rust-like surface layer, used in architecture to give the space an industrial feel). They “break the system” on the facade, adding to it an interesting character. The top of the central part will be crowned with a clock and an illuminated inscription with the name of the railway station. Regardless of the facade, the southern wall of the building will look especially interesting. A “green wall” of 60 square meters is designed, on which grow almost five hundred plants of seven species, including, among others, euonymus, periwinkle or sedge. The facade of the station in the new version will acquire new lighting that emphasizes its shape.

After reconstruction, the station will be smaller than it is now. A modern space for travel service was designed in the central part on the ground floor, i.e. the hall and the adjacent waiting room. Particular attention will be paid to the interior, where fashionable “gray” will be combined with the cladding made of Corten laminate. The interior will be complemented by seating, showcases for timetables, electronic boards for the arrival and departure of trains, and modern lighting. Next to the waiting room and the hall in one of the rooms there will be a bicycle parking. It can accommodate at least 26 two-wheelers. Cyclists will also find a bike repair station there. After the reconstruction, the path to the platforms will change slightly. You can get to the tunnel leading to them by going directly through the central part of the building or by entering it from the waiting room. On the first floor of the central part of the building, a summer waiting room is designed, which is also a viewing terrace – an open space, covered with a roof with a skylight in the central part, with green spaces and small architecture. We can access it from the pier or by elevator from the ground floor of the station. From the balcony, which will be located on the parade axis of Mikivitza Street, you will be able to see, among other things, the tower of the Church of the Assumption of the Blessed Virgin Mary.

Thanks to the reconstruction, the wings of the building will acquire completely new functions. In the northern part, on the ground floor, the municipal space of Racibórz is designed, and on the first floor there are offices of railway companies. On the other hand, in the south wing at street level, there will be commercial and service buildings, and on the first floor there will be a cultural area run by the local government.

See also  MEiN: Applications can be submitted in the STER program until June 30

– Thanks to the reconstruction, the railway station in Racibórz will undergo a real transformation. It will become convenient, safe and environmental. Inside, travelers will find a tastefully and modernly furnished passenger service space and an urban culture area. Among the most interesting architectural solutions, mention should be made of the balcony on the roof of the building and the “green wall” made of plants on the southern facade of the station – says Irenos Malani, board member of PKP SA.

The construction of the Racibórz station in the new version will be suitable for people with reduced mobility. Architectural barriers will be removed. The building will have new solutions, such as lines with areas of interest, Braille signs, elevators, ramps and a number of other solutions, which will positively affect the comfort of occupants.

The investment is not just about improving aesthetics and increasing passenger comfort. A number of environmental solutions will be implemented at the station. Among them are energy-saving lighting, rainwater recovery and use as gray water, ventilation with heat recovery, photovoltaic panels for “green energy”. Thanks to the modern monitoring and fire safety system, security at the station and its surroundings will be improved.

A small car park will be built on the south side of the station, and sidewalks will be renovated along the building.

The investment in Racibórz costs a little more than a total of 30 million PLN. It is jointly financed by the state budget. The investor is PKP SA. The business contractor is Texom from Krakow, and the design documents were prepared by GPVT Studio from Pozna. The planned completion date of the investment is the first half of 2024.

See also  Leisure and learning - Crowds at the picnic of the National Armed Forces - Szczecińskie24.pl

Don't Miss it History is happening before our eyes. The first such success
Up Next New Mike Flanagan Horror Movie Coming Soon to Netflix! There is a trailer