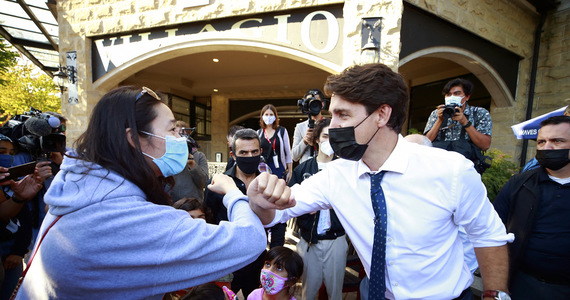 There were several anti-vaccine demonstrations in Canada on Monday, and doctors and politicians criticized them for intimidating health services and patients. Some politicians are calling for the law to be tightened to better protect hospitals and clinics.

“In Canada, everyone should be able to safely enter a hospital or clinic, without fear of obstacles, intimidation or threats,” Canadian Prime Minister Justin Trudeau wrote on Twitter. He announced that if the Liberals form a government after the elections to be held within a week, he will change the rules so that it is a crime to deny access to buildings where health care services are provided.

It is not acceptable to prevent someone from entering a hospital or clinic, or to threaten the health care professional who is providing care to the patient. We will protect health care workers, patients and their families. https://t.co/7IIaYHkk9w pic.twitter.com/SkNjb7AWdv
Justin Trudeau (@JustinTrudeau)
September 13, 2021

The protesters were also criticized by the leaders of the New Democratic Party, Jagmeet Singh and the Conservative Party, Irene O’Toole.

The Ontario Doctors and Nurses Associations published a joint statement condemning the protests and calling for the establishment of protection zones around health facilities. The administration of Ottawa Hospital, one of Canada’s largest scientific and clinical hospitals, tweeted on Monday that “those demonstrating outside hospitals are not only endangering workers and doctors, but also hundreds of patients.”

Toronto police warned Sunday that they respect the right to peaceful protest, but that the operation of hospitals and the safety of people should not be jeopardized. Ontario Premier Doug Ford called the protests “selfish, cowardly and reckless” and Toronto Mayor John Tory condemned the demonstrations and expressed support for police action. He wrote on Twitter: “It’s been too long since I endured the tyranny of a few people obstructing access to healthcare during a pandemic.”

Alberta Premier Jason Kenney condemned demonstrations outside hospitals in Edmonton and Calgary and threatened to act against “defend critical infrastructure” laws. This is a local ordinance intended to stymie the actions of environmentalists protesting the pipeline construction. In Alberta, the number of cases is increasing so rapidly that the occupancy rate in intensive care units is now 130%. – The media reported.

Vaccines gathered outside hospitals across Canada on Monday as part of a “silent demonstration”. The organizers are Canadian Front Line Nurses, a group founded by two Ontario nurses that is spreading false information about COVID-19, vaccines, and treatments. Both nurses are investigated by the professional organization of the Ontario College of Nursing.

No one has yet explained how two nurses and a group of colleagues managed to conduct such extensive campaigns across Canada.

Anti-vaccine advocates criticize vaccine passports as discrimination, slogans of government tyranny and “crimes against humanity”. Vaccines, including associated politicians, appeared on social media on Monday, announcing that they would bring weapons to Monday’s demonstrations, invade hospitals and prove that “Covid-19 is fake.” However, no such events were recorded on Monday afternoon. On the other hand, protesters appeared in front of Toronto General Hospital with the words “I demand my right to be ignorant and selfish.”

Some Canadian provinces have already introduced vaccine passports, which are valid in British Columbia on Monday, and within 10 days they will be partially available in Ontario, and many offices and companies are asking employees to vaccinate.

The problem of vaccines in Canada is not new. In early September, in several cities in British Columbia, vaccines, also called Canadian front line nurses, blocked access to hospitals. Then similar events occurred in Toronto.

Canadian addiction doctor Gabor Mattei, best known from his books, told CBC public radio that one reason for the spread of vaccines may be trauma, which leads to mistrust and anger. These movements give a sense of societal and psychological comfort, but they are also addictive.

According to the latest data from the Federal Ministry of Health, 88.1 percent. New unvaccinated cases 10.4%. They are people who still have incomplete immunity, 1.5 per cent. They are people after both doses of the vaccine.

In Canada, 85.1% of people over the age of 12 have received at least one dose of the vaccine, and 78.2 percent. They were fully vaccinated.

According to the Canadian Institute of Health Information report, the cost of treating a COVID-19 patient admitted to the intensive care unit is PLN 50,000. CAD (Canadian dollars), while treatment in intensive care for a person after a heart attack is 8.4 thousand. Bastard – scoundrel.

“Juveniles”: vaccination has begun in schools, but no one wants to
polsat news