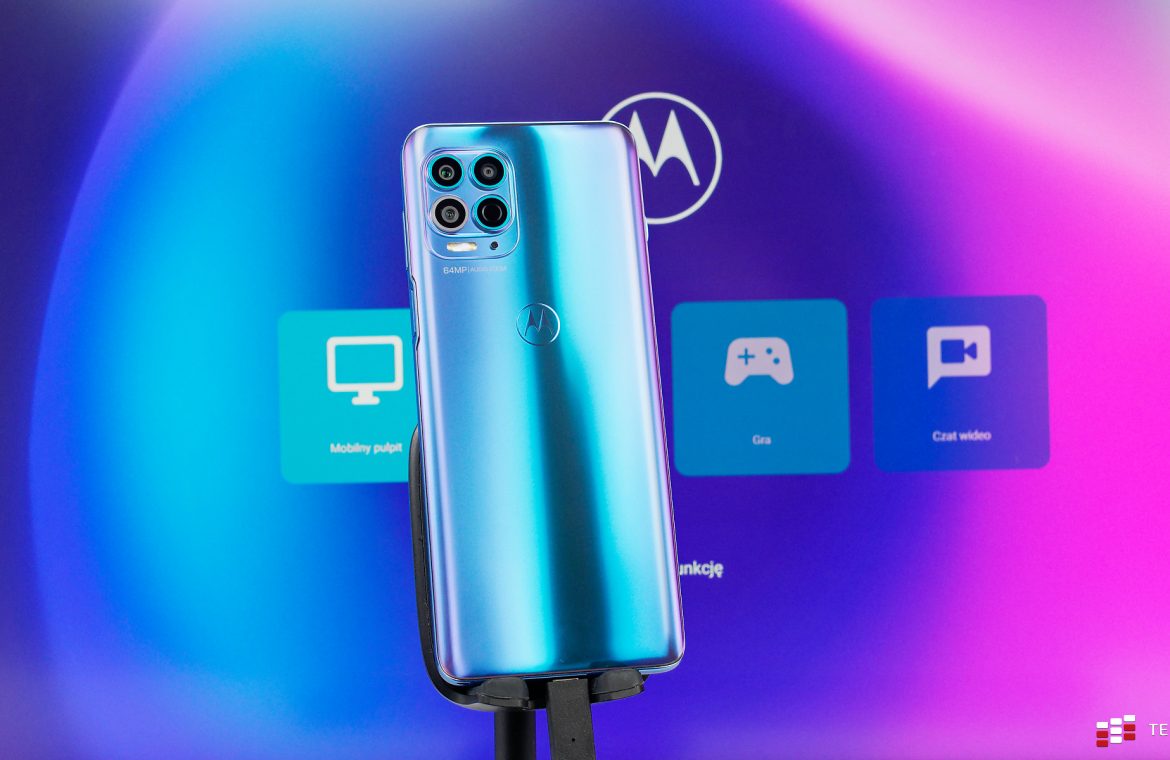 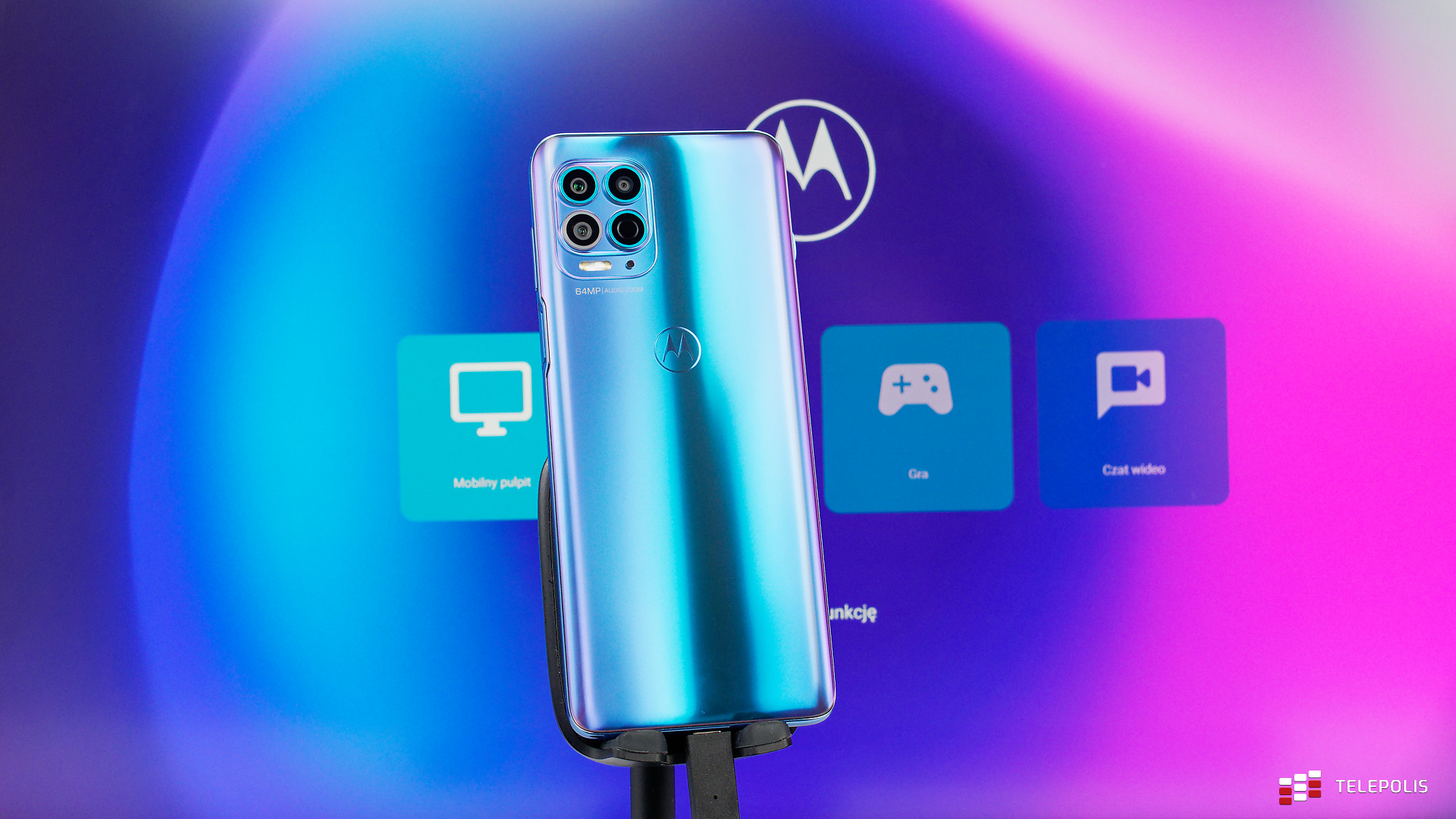 I’ve been saying for a long time that the computer I carry in my pocket is enough for me. I have a lot of strength to work after hours? There are too many games on Google Play and not enough life for them. All you need is a bigger screen, a decent keyboard and of course a phone that works well as a desktop. The Motorola g100 with Ready For features is perfect for this.

Motorola Ready For is portable entertainment on the big screen

This isn’t the most common one, but it’s the best use of Ready For by far. After I connect my phone to the bigger screen, I can go straight to Game or TV to get started. I play a lot and try to find games on Google Play that work well with the console. Then Motorola Moto g100 turns into a console.

The Android interface has been reduced to a list of games that I can navigate using the console. The phone is good at sending a full screen image to my 4K screen, although mobile games are instead rendered in 1080p. She played, among others, in “Sky: Children of the Light”, “Dead Cells” and “Minecraft”. They all worked perfectly and the controls were comfortable and responsive.

At any time, I can pause the game, unplug the console, leave the house and continue on a small screen, like a tram. Unlike using streaming services, I can also play offline. 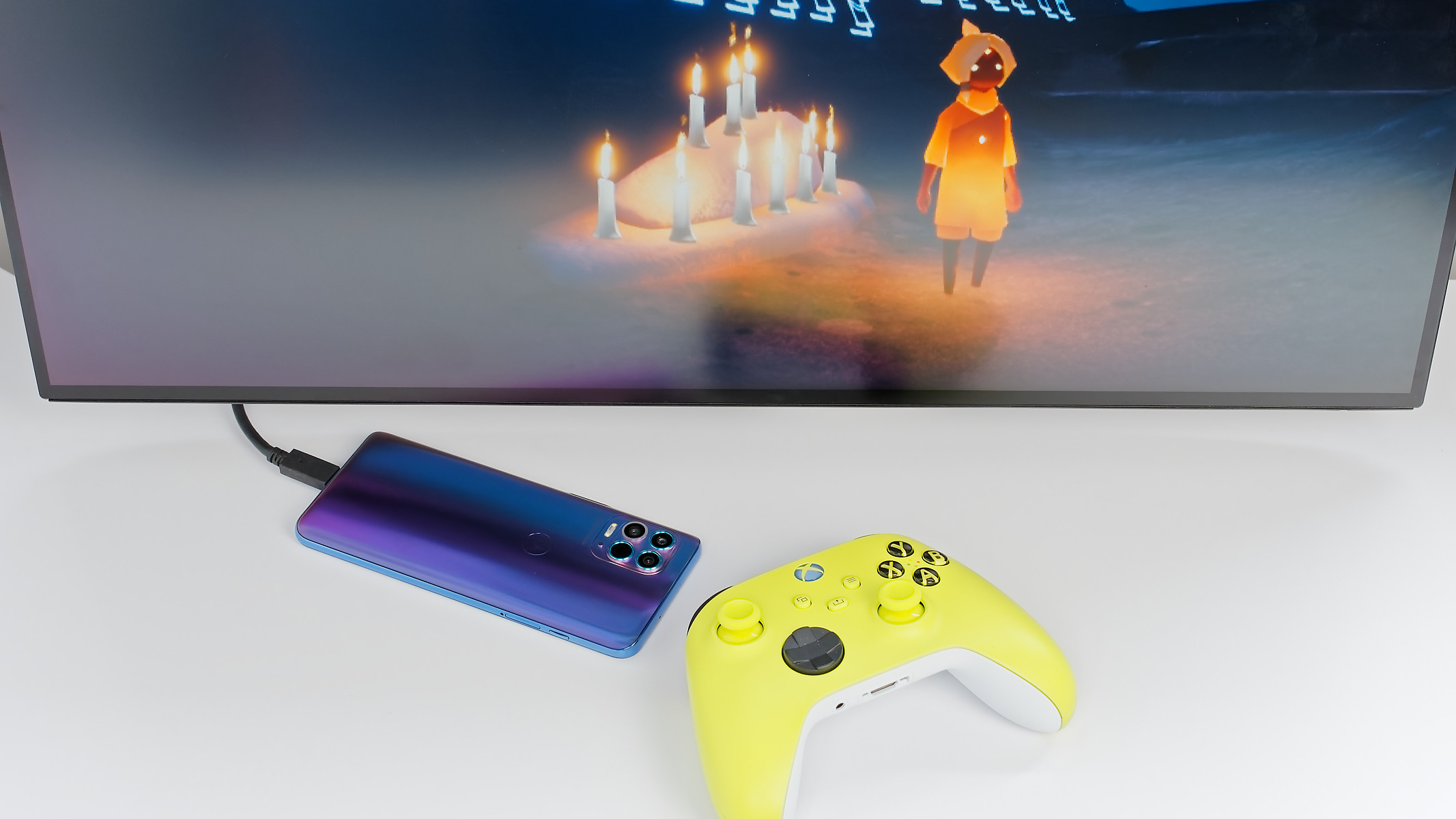 The Motorola Moto g100 is no worse than a smart set-top box. Well – I don’t have a TV, I use a “dumb” projector to watch movies, but Motorola Ready For adds a lot of possibilities to it. In On-Screen TV mode, I can quickly select an app to watch online or a local file player. The projector will get a picture, I have an audio output option, and the phone can turn into a remote control.

In the summer, Motorola Ready For opened up another form of entertainment for me: the outdoor cinema. My projector fits in a backpack, you need a white wall or a tight sheet, a speaker and electricity. In this way, you can make a show with friends in the plot, and even prepare a visual scene for an amateur concert.

To connect here, all I need is the USB-C to HDMI cable I got with the phone. 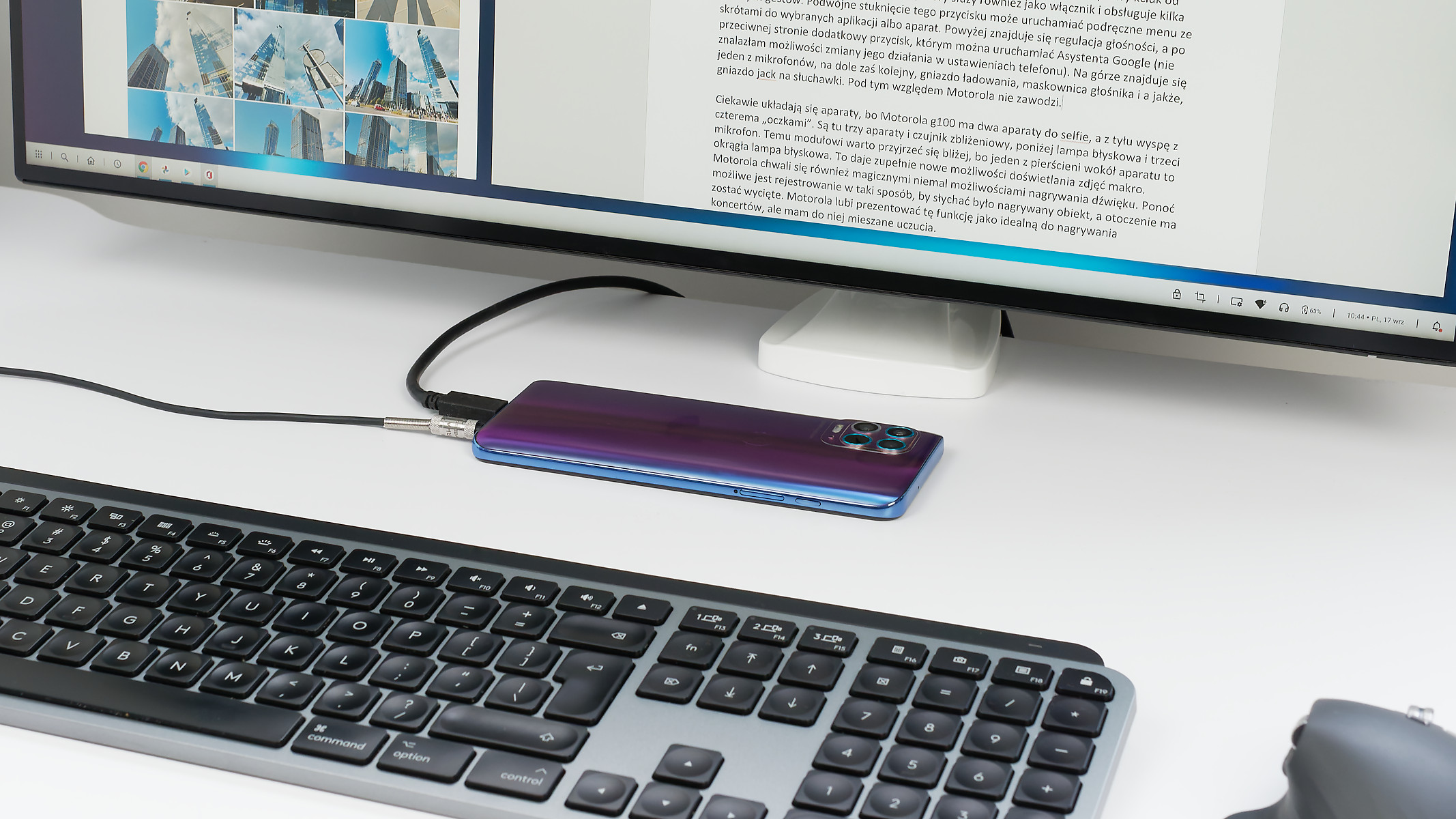 Motorola Ready For is an office in your pocket

I spent most of the time using my Motorola phone for work. When it comes to mail, instant messaging, Word and browser support, I don’t need anything else. Basically Motorola Moto g100 app as Computer for office work, multimedia and learning Restricts Google Play content only.

Applications will work in windows, and switching between them will not be annoying for someone who has moved from Windows. At the bottom of the screen there is a bar with a menu and some tools, where entering the Polish language and characters works without any problems Common keyboard shortcuts, including Alt + Tab to switch windows. 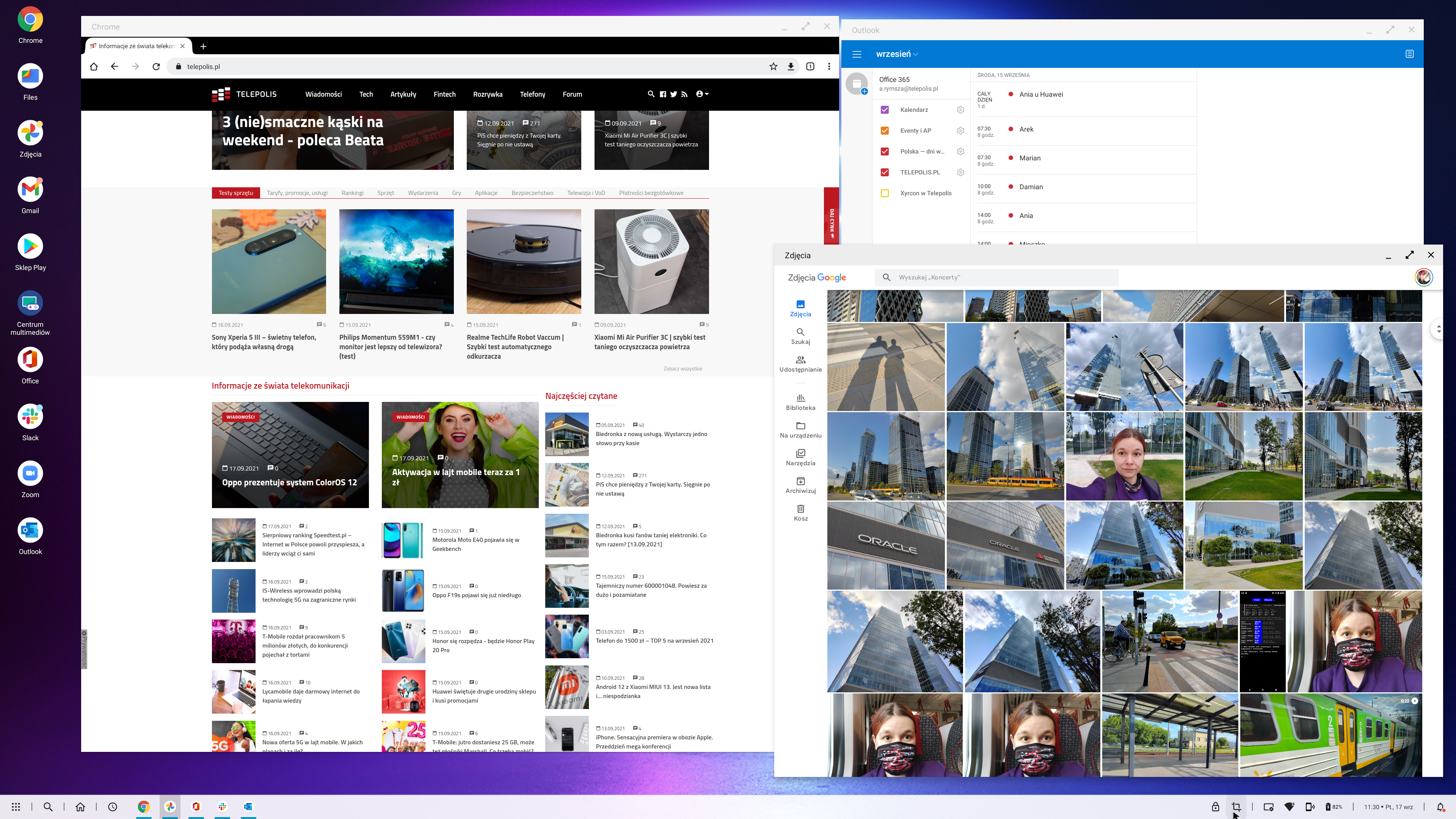 At work, I also need headphones and a memory card reader, and it doesn’t hurt to have USB-A on hand to plug in a USB flash drive or a microphone. The cable from the kit was no longer sufficient, so I used the USB hub built into my monitor. Headphones, as shown in the photo above, can be connected directly to the phone. Motorola sticks to its decision that its models have a 3.5mm jack.

Mouse control works fine, although animation of cursor movement seems difficult to me. However, I like to use gestures, so I quickly switched over to the touchpad. as? The phone, with the screen left up, can be used to control the cursor. In my opinion, it is more convenient than the mouse, especially when you need to work with the map and resize it. 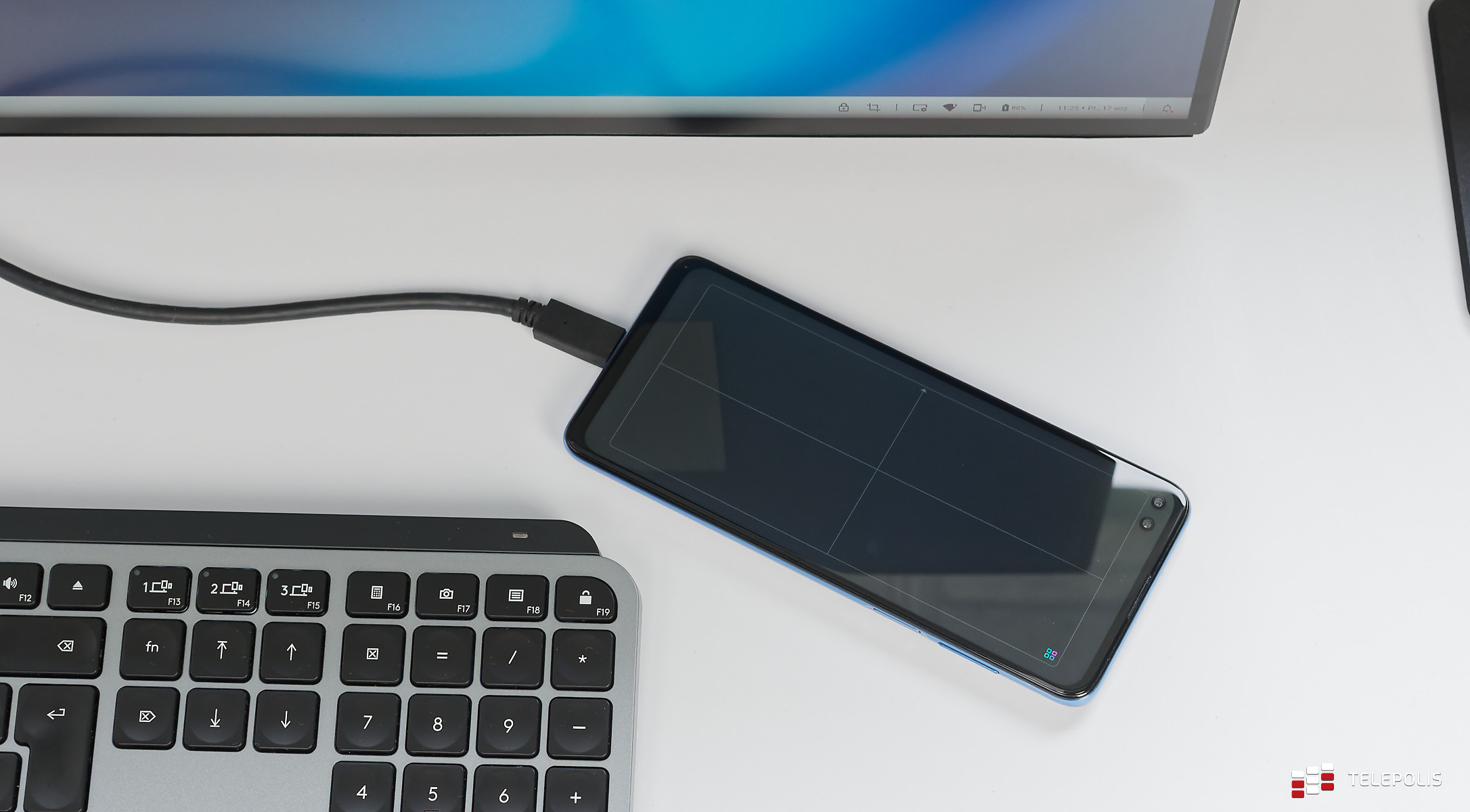 Working this way, I wrote a lot of text, had no connection issues, listened to recordings from the dictaphone and even managed to process photos (Lightroom mobile was up to the task). There was enough computing power for everything. Hours later, I was surfing the web, shopping, talking to my friends, planning a trip – all comfortably, using a keyboard and a big screen…and yet on the phone.

I don’t feel Motorola Ready For Desktop restricting me in any way. As long as there is an app on Google Play that meets my needs, I can do whatever I want.

Motorola Ready For is the new Zoom format 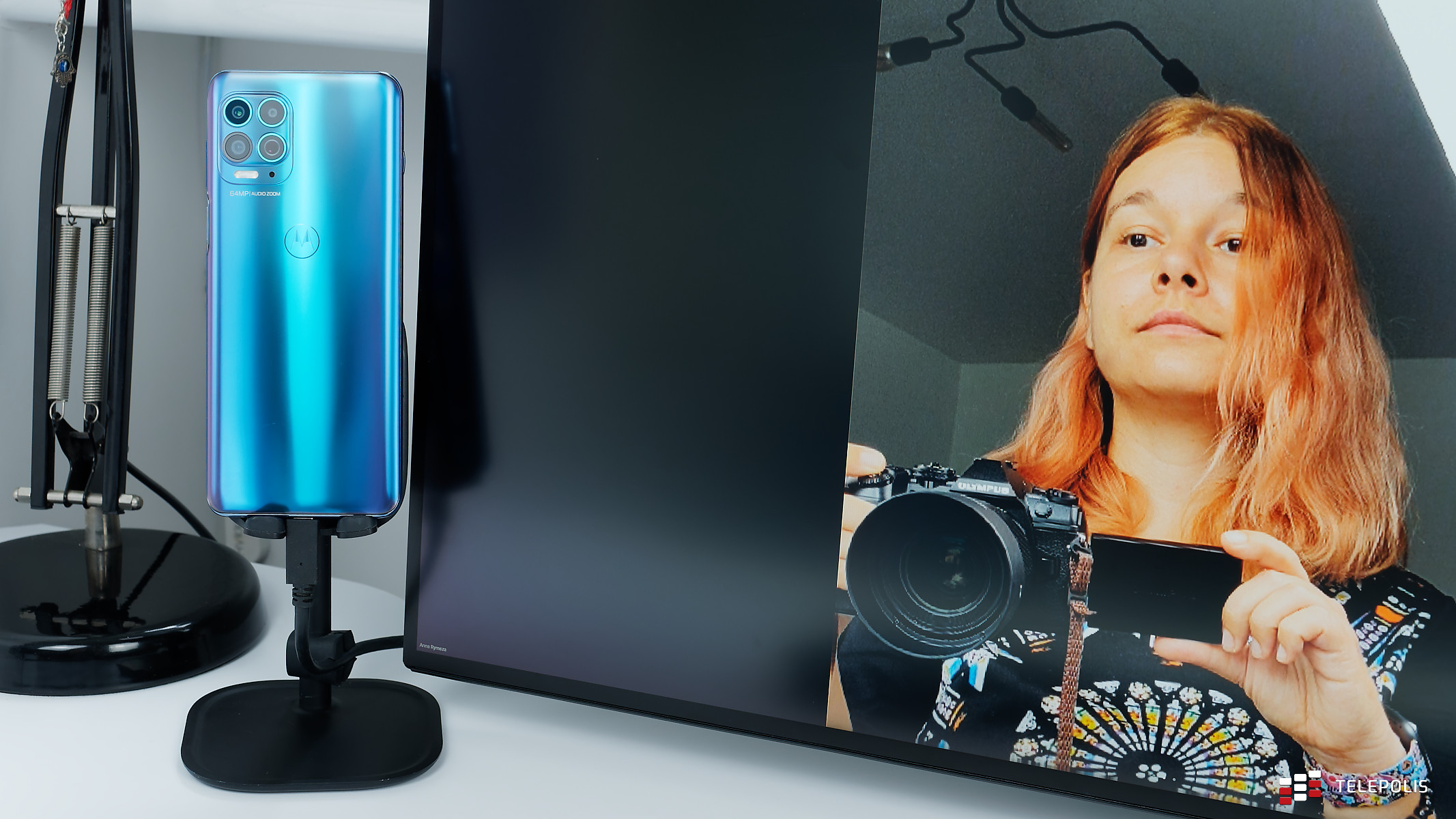 It seemed to me that I wouldn’t see anything new regarding video calls, but it turned out to be the most surprising feature of Ready For. Obviously, the fact that the phone can be a webcam is no surprise – after all, when I’m talking on my phone through Zoom, its front camera is my webcam.

In Ready For I can use the front camera and get a preview on the phone screen or flip it over and use the main camera. And here a beautiful surprise awaited me: The ability to track my face. Before starting the conversation, I can adjust the sensitivity and degree of “zoom” of the object. 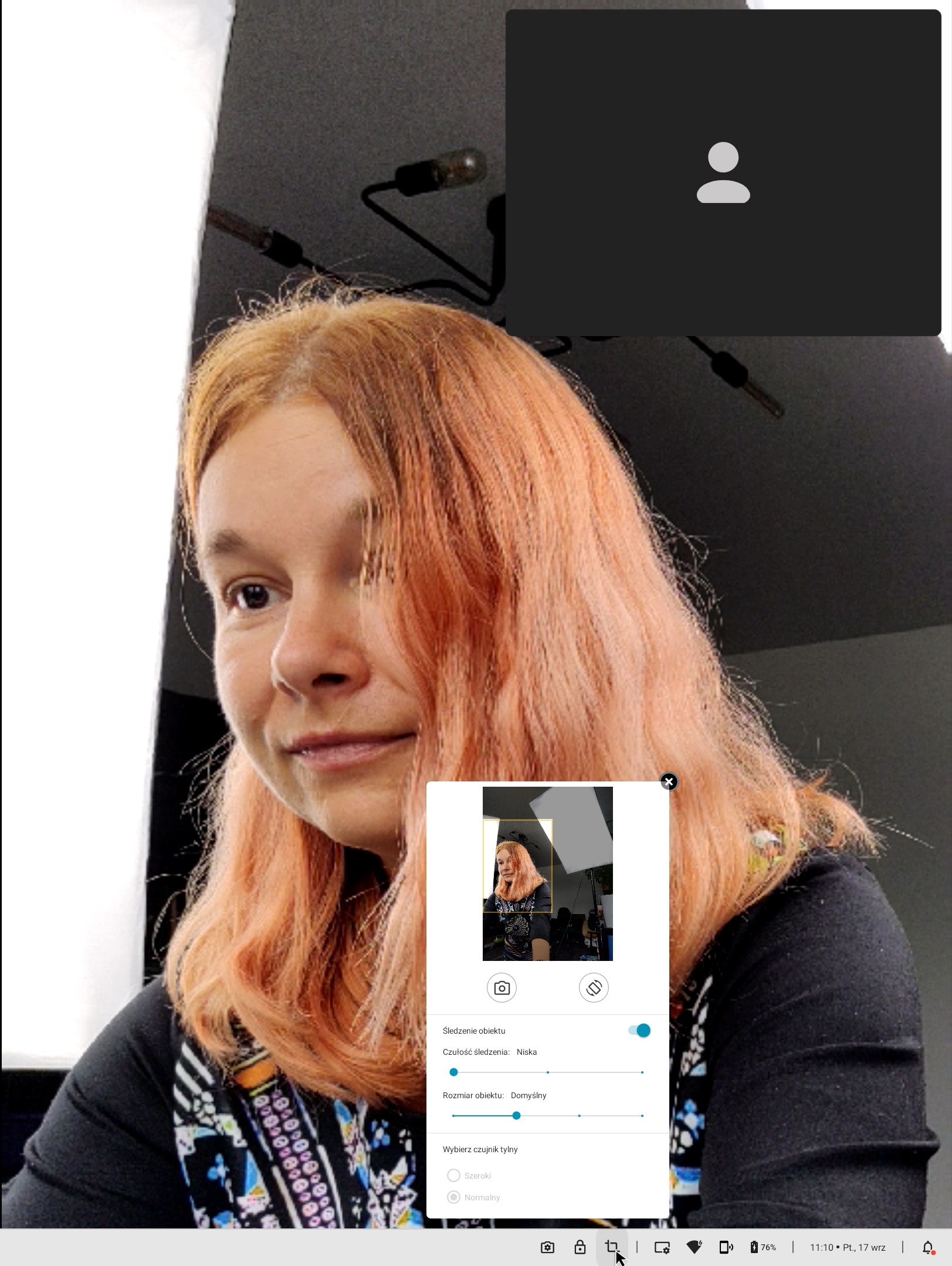 This is the perfect solution for people like me, because I work standing up a lot and sometimes walk around the apartment during a conversation. It would also be practical if I was airing furniture paint or just talking to someone while I was cooking.

The Motorola Moto g100 works very well to follow my face and hands. During several test interviews, she only “lost” her focus a few times. It works flawlessly for this Switch between the main camera and the wide-angle camera. It’s as if the phone is “guessing” when I want to show something bigger in the frame. This is a feature you just have to try, even if you don’t intend to use Motorola as your main desktop.

Motorola Ready For is convenient thanks to the magic of the USB-C connector. When I connect the Motorola Moto g100 to the projector, I use the HDMI cable from the kit, and on my desk I have a monitor with a USB-C docking station and various connectors. This connection is fast, but it still takes a few extra seconds and has some space limitations. During the Motorola Edge20 premiere, I was able to test the next generation Motorola Ready For, which no longer requires cables to work with Ready For.

As long as your TV supports Miracast, you can send a picture to it wirelessly and use the Motorola Edge20 as a remote control. The ability to integrate Motorola Redy For with Windows is also approaching, including booting the phone from the Ready For PC app on the computer. The future of Motorola Ready For looks very encouraging.

The article was created in collaboration with Motorola.

Scroll down to the next entry

Don't Miss it Kazarnik: We cannot favor the development of science only in certain cities
Up Next Pandora leaves. Journalists from 117 countries on the trail of the wealthy and tax havens