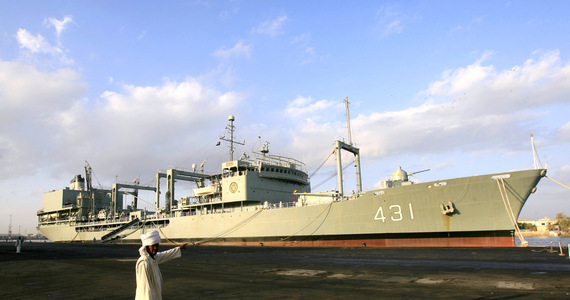 A fire broke out in the largest Iranian fleet that could not be contained. The ship sank in the waters of the Gulf of Oman near the Strait of Hormuz. The cause of the fire was not determined and the crew was safely evacuated.

The Chark was a support unit that replenished the supplies of other ships; Illustrative image
/France Press agency

Khark, named after the island that served as Iran’s main oil terminal, was a support unit that restocked other ships, carried heavy loads and had a helipad, according to the Associated Press. State television and the semi-official news agency Fars and Tasnim described it as a “training ship”.

Iranian media reported that the ship sank near the port of Dusk after a failed firefighting operation.

The Israeli daily Israel Hadom reported that the Iranian authorities denied previous speculation that the ship and other ships were heading to Venezuela to serve as the Iranian Revolutionary Guards’ forward operating base.

This is another naval disaster by the Iranian Navy. In 2020, during an exercise near Dżask, a missile accidentally hit a warship, killing 19 sailors and wounding 15 – reports the Associated Press.

According to the United States, Iran has been responsible for several attacks on ships in the Gulf of Oman over the past two years. Authorities in Tehran deny the accusations, the agency wrote. Israel Hajoum adds that there have also been attacks on the merchant ships of Israel and Iran in recent years, which the two countries blamed on each other.

Video
See also  Russia. Sergey Lavrov was heading to Beijing. Halfway through, the plane turned back

Sri Lanka is on the brink of an environmental catastrophe. Plastic from a burning ship floods the seashore
France Press agency

Don't Miss it Countries with the largest debt in Polish companies
Up Next Virtua Fighter 5 Ultimate Showdown in comparison. Comparison with classic warriors and PS3 version